Directed by Haile Gerima in 1993, the Ethiopian production “Sankofa” mystically and viscerally centered Black diaspora in a slave narrative. The idiosyncratic film opens with a Black man with white body paint banging on a set of drums while dissolves of sun-smeared fields complement underneath, leading to an intoxicating invocation to those Black souls lost during the Atlantic slave trade to rise up and tell their stories. At the outset, “Sankofa” is what co-directors Gerard Bush and Christopher Renz wanted 2020's “Antebellum” to be. Similar to that film, a modern-day Black woman is transported back to slavery. But Gerima’s film thrums with a reverence for the ancestors who lived through that historical trauma that’s not at all present in Bush and Renz’s exploitative work.

“Sankofa” didn’t receive distribution upon its initial release. Instead, Gerima self-distributed the film to independent cinemas across the country, and it’s not been widely seen since then. Ava DuVernay’s Array via Netflix is now re-releasing a 4k restoration of the film, and the result is a visually striking unearthing of an important chapter in world cinema.

Mona (Oyafunmike Ogunlano), the film’s protagonist, is a present-day African-American model sporting a leopard print bathing suit and orange Tina Turner inspired hair, working a photoshoot on a Ghana beach in the shadows of Cape Coast Castle. During the trans-Atlantic slave trade the castle was the lost stop before Africans confronted the further horror of traveling to America. It was “the point of no return.” In the opening scenes, Gerima’s lens peers over the now-antique cannons that line the white-sand walls, looking toward the tangerine sun-soaked beaches below, wherein Ghanians laugh, play, and prepare to fish.

An older Black man, the self-appointed guardian of this castle, adorned in a white robe and holding a bird-crowned staff, takes great displeasure in Mona who isn’t just using the sacred ground for a photoshoot. She’s doing it for a white photographer. The guardian also takes umbrage with the hordes of mostly white tourists crawling through the dungeons that once held slaves. The guardian seems to cast a spell on Mona. She descends into a dungeon, finding African men and women silently chained together. She tries to escape but is caught by the slave traders who are manning the castle. Somehow she’s been transported back in time, and, in a distressing scene, is stripped and whipped (thankfully, the violence in “Sankofa” isn’t gratuitously marked by close-ups and happens mostly off-screen).

The film takes a jagged, almost illogical turn. The next time we see Mona, she’s named Shola and operates as the movie’s narrator. But Shola has zero memory of who Mona is or was. “I was raised in the big house with Joe and Lucy, and trained to serve the Lafayettes,” Shola recalls. From her perspective we learn the various slaves who populate the plantation: there’s Shola’s lover, the rebellious West Indian Shango (Mutabaruka); the older, obedient head slave Noble (Afemo Omilami); Nunu (Alexandra Duah), who legend says killed a white man just by staring; and Nunu’s son Joe (Nick Medley), a head slave who becomes poisoned by Christianity.

At its core, “Sankofa” concerns the ways Africans tried to keep their culture during slavery, and the varied methods of assimilation they fought against. It’s telling how every slave speaks with a different accent, here, owing to their varied origins, and speaking toward the African diaspora. Rumors also persist of a group of slaves who gather in a cave to plot an overthrow. Shola becomes part of this unit, often signified by their wearing of red scarves on their heads, but is hesitant to become fully initiated, a failing she connects with her Christian upbringing. The same method of assimilation that stops Shola symbolically short infects Joe too. Much of the plantation already despised him for being a head slave, but once he begins to regularly attend church, often seeking approval from Father Raphael (Reggie Carter), his mien shifts toward cruelty, eventually believing both Lucy (Mzuri), a slave with a crush on him, and his mother are heathens.

“Sankofa” is a visually enrapturing movie. Gerima loves using dissolves to layer meaning atop of meaning. Cinematographer Augustin Cubano gravitates toward golden hour shots. The sun here isn’t blinding, or on the flip side, inviting. It’s all-consuming, wrapping around the landscape and viewer with the warmth of the overwhelming sweat. The soundscape, an eclectic mix of lashing whips, dizzying jazz horns, and woozy spiritual moans, likewise to Mona, is seemingly trapped between whispers of modernity and the booming echoes of the past.

Each character bears their own weight: the plantation’s master routinely sexually assaults Shola; Nunu is nearly sold away; Noble awakens from his supplicant slumber to grapple with the abuse he’s wrought. There are rebellions; the once warm sunny skies alters to a red-drenched sign of defiance. It culminates with Shola taking revenge against her abuser.

Gerima’s “Sankofa” is an invocation not just to African ancestors, but also the present-day viewer. It calls to attention how history exists in the present, how the spirits of the long-gone can still affect today. Consider its final scene: the camera panning over an assemblage of Africans, all colorfully dressed, including Mona, sitting on the steps of the castle, staring out toward the sea. It is a calling to those souls. Likewise, the legacy, beauty, and humanist sensibilities contained within “Sankofa” still call to us today. 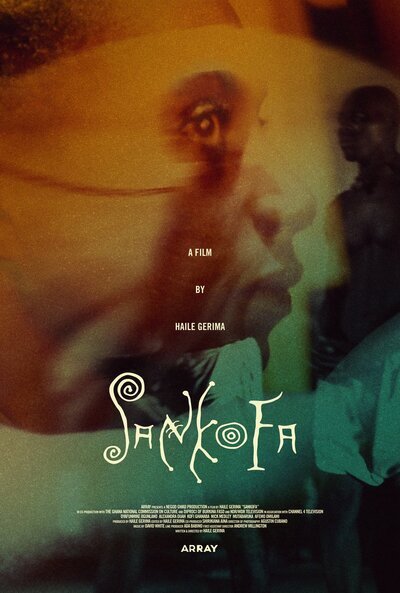