Fernando Coimbra’s “Sand Castle” offers too little to the War is Hell genre to be noteworthy. It’s a true story, and so that has some inherent value, and the young cast is relatively strong, especially a few stand-outs, but we’ve seen too many similar stories in the decade-and-a-half since 9/11 for this one to register as anything special. On a production level, it’s surprisingly flat, as if its story was strong enough to overcome a lack of visual language. Sadly, it’s just not.

The most interesting thing about “Sand Castle” is when it takes place. Its protagonist, Private Matt Ocre (Nicholas Hoult) enlisted in the reserves to help pay for college … in July 2001. Of course, two months later, the world changed. The film opens with an Ocre so desperate to get out of combat that he slams his hand in a car door. It doesn’t work. He’s quickly dispatched to Baghdad, where we meet this film’s cast of military characters, led by the tough but rational Sgt. Harper (Logan Marshall-Green).

Three months after an intense firefight that ends with an Apache helicopter producing American-brand devastation, Ocre and his team are sent to a small town called Baqubah. They’re there to fix a water pumping station so the local villagers don’t die of thirst. Of course, the station needs fixing because the U.S. forces bombed it. And, of course, some of the locals don’t want the American soldiers anywhere near them. And so an interesting dynamic develops, one in which “Sand Castle” becomes something of an allegory for U.S. foreign policy—cleaning up a mess we made—and one that reflects how those Oorah days after 9/11 (in which it felt, at least to some, that the United States was going to help save the Middle East) soon fell into quicksand. Ocre is increasingly aware of the futility of their very presence in Baqubah. When someone says in the final act, after a brutal loss of life, “Well, a rough night, but it’s not for nothing,” it’s tempting to disagree about the last part.

The young cast of “Sand Castle” delivers a mixed bag of performances. Hoult is one of those actors who needs a strong director to bring out his best work and Coimbra doesn’t seem able to do that. He’s too flat and uninteresting as a protagonist. His most interesting scene is his first, when he slams his hand in the Humvee door. After that, we don’t really get to know him the way we need to. Far more interesting is Marshall-Green as the more resilient and experienced soldier. He’s a very intriguing young actor who I hope to see more of soon. As for Henry Cavill, first surprising in a buzz cut and beard, he barely makes an impact, which has kind of become his norm. Better in the supporting cast are a slightly unhinged Glen Powell ("Everybody Wants Some!!") and a practical Parker Sawyers (“Southside with You”).

Ultimately, the biggest problems with “Sand Castle” are familiarity and form (or lack thereof). As for the first, we’ve seen this story before, at least a dozen times. Sure, the particulars are different, but the futility of war, especially in the 21st century, has been well documented. And there’s just not enough new to this variation to justify the lack of character development and visual flair. It’s too routine in nearly every way. Sure, there’s a performance here or there, and a conversation-worthy topic about how wartime was different in 2003 than today, but neither of those are nearly enough to carry a film that’s the last thing a war movie can possibly be: boring. 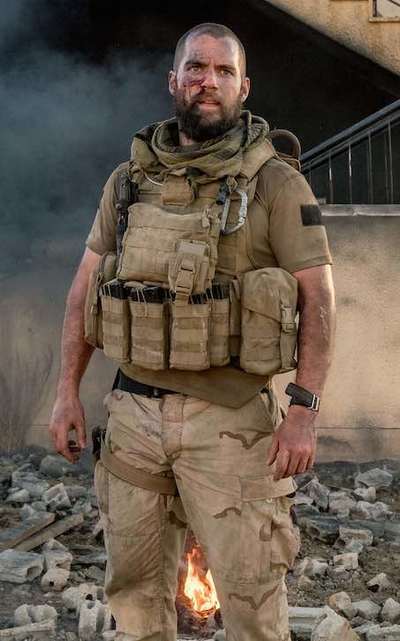