The time-traveling assassination romantic comedy satire "Same Boat" is so peculiar and committed that if you tune into its wavelength, you may not mind that it's more a series of deadpan comic riffs than a satisfying feature. It takes its sweet time getting to the point, and generally speaking, the less interested it is in moving the plot along, the weirder and funnier it becomes. But there are long stretches where it seems to be running out the clock to pad the story to feature length. Your mileage will vary depending on what you want out of it, and whether you find its actors charming and funny or arch and indulgent.

Co-writer/director/star Chris Roberti (of TV's "Broad City") plays James, an assassin sent from the future with his trainee Mot (Julia Schonberg) to kill people responsible for making the future worse. The first targets  (amusingly or horrifyingly, depending on whether you like the genre) are the inventors of reality TV, slain on a beach in 1989 with device that looks like one of those forehead thermometers you can buy at a pharmacy. Then the story jumps to 2019, where James and Mot board a cruise ship to kill a woman who, we're later told, will be responsible for crafting a legal loophole that let polluters devastate the environment.

And then the movie shifts into romantic comedy mode, though with an indie hipster flavor that's very nineties (though not in a bad way). The target, Lily (Tonya Glanz), is first seen spontaneously breaking up with her boyfriend Rob (Evan Kaufman) as the romantic cruise they've booked leaves port. After seasickness confines Mot to her cabin, James drifts into Lily's orbit, gaining her confidence and positioning himself for the kill. But wouldn't you know it: he falls in love with her, and she with him.

The aimless yet spiky patter between the two is the main reason to see "Same Boat," although here, as in all matters related to the film, you have to admit the lead couple is an acquired taste—and not just because he's a professional killer. James describes everything he likes in whatever time frame he's inhabiting as being part of "a golden age" (of fruit, of detergent, etc). He seems to be in no rush to carry out his mission because he's having fun enjoying the specifics of a time and place. One of the highlights of the film is the sequence where James gets drunk, plays the slot machines, falls asleep in a deck chair, and awakens to crew members speculating on whether he looks more like an atheist or somebody who's up early to attend church services. "I am an atheist, but I'm interested in Buddhist thought," he mumbles.

James and Lily are ringed by eccentric supporting players, some regrettably one-note (a sexually voracious couple that cleans staterooms), others intriguing (a railing polisher and illusionist admits that the rail-polishing pays the bills, but "I generally just throw in the magic for free").

There's ultimately not much to "Same Boat" even as a low-budget production stunt (the closing credits reveal that the whole thing was shot on a real cruise ship without permission). The not-muchness can be enjoyable if you're looking for a science fiction tale with no special effects, or a light romantic comedy where the dilemma is whether to give yourself permission to be happy in love or allow the planet to be despoiled by polluters. This movie might ultimately prove more interesting once the filmmaker has made a couple more, historical circumstances permitting. There's a kooky post-millennial cousin of Richard Linklater's "Before" trilogy struggling to get out of Roberti's debut. When it gets there, the result is an acutely observed comedy about smart, sarcastic, bitter people stumbling into attraction. 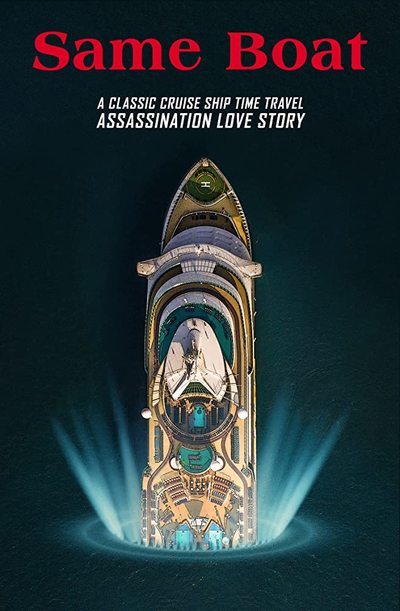