At several points during "Salt and Pepper," police inadvertently park over sewers that have bombs in them. The cars are blown up, which is good fun.

At another point in the same movie, there is a soldier with a grenade fastened to his belt. One of our heroes delicately pulls the grenade pin and the soldier is blown up, which is not such good fun, I think.

"Salt and Pepper" is at least nominally a comedy. But it contains scenes too violent to be absorbed by the comedy form and becomes a weird exercise in inconsistency: We're never quite sure whether to expect a pratfall or an immolation. In any event, we get too many of both.

About the first thing we learn in the movie is that Sammy Davis Jr., plays Salt and Peter Lawford plays Pepper. But Davis is black and Lawford is white -- get it? If you found it funny, this is your movie. The confusion over names becomes a running gag. As you might guess, the movie is terribly short on running gags.

The plot involves Lawford and Davis as the co-owners of a Soho nightclub. They get involved with some sexy dames and comic strip police inspectors and more or less stumble into a plot to overthrow the British government. It's an easy plot to stumble into, but sticky to get out of.

Davis has a scene where he plays the guitar like a rock singer, and that, I think, is a criminal waste of talent. I have seen Davis in person several times and am inclined to think he's the best act in show business.

I am at a loss to account for this movie. I know It's tough to find a good movie property, but I wish Sammy would find one suited to his talent, instead of very nearly fatal to it. 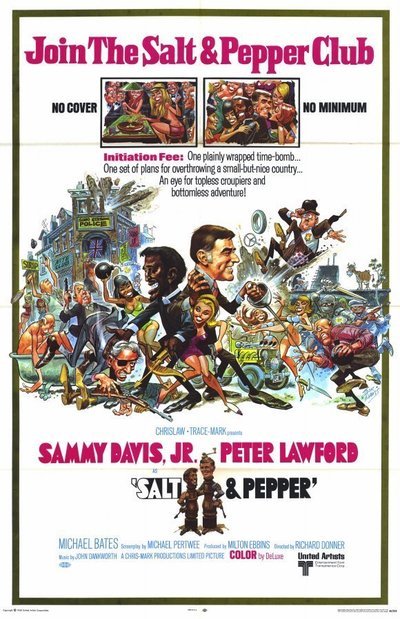