You may have already heard that “Rock Dog,” a new animated movie from an outfit that’s not Pixar and not Disney and not Dreamworks and not the People Who Gave You “Ice Age” and not the People Who Gave You “Minions” and “Despicable Me” is, besides not being from a proven provider of child-distracting content, also a movie that features a character who’s a yak and is named Fleetwood Yak.

All these things are true. “Rock Dog” is a Korean/Chinese co-production crafted by largely American animation artists. Portions of its scenario may look like they’ve been inspired by the likes of “Kung Fu Panda” but the actual source material for the movie is a Chinese graphic novel called “Tibetan Rock Dog” by Zheng Jun, whose day job is as a Chinese rock musician. And yes, there is a character in it who’s a yak named Fleetwood Yak.

But to be honest that’s really the most objectionable joke in the whole feather-light, primary-color filled, shorter-than-90 minute movie. What’s interesting about “Rock Dog” is just how very unapologetically a kid’s movie it is. True, the voice cast for the American version is designed to have some adult appeal. The aforementioned Fleetwood Yak is voiced by Sam Elliott, and the role of the yak is structurally a nod to Mr. Elliott’s work in “The Big Lebowski.” But this movie, despite being about a dog who wants to play rock music, has no winky pop-culture references besides that. The comic actors doing voice work, who also include Luke Wilson, Lewis Black, Matt Dillon, J.K. Simmons, Kenan Thompson, and Eddie Izzard, all do their jobs with relish and dispatch, but there’s nothing clever-clever about it.

The story is dopily simple. In the Asian mountain (Tibet is not prominently mentioned here), an alliance of guard dogs and self-shearing lambs have managed to form a society that happily keeps predatory wolves at bay. The mastiff patriarch Khampa (Simmons) has come to believe music has no part in this society—too distracting—and has banned it. His good-natured but lacking-in-fire son Bodi (Wilson), slouching around in a very neat wool cap that nonetheless manages to scream “stoner,” is traipsing through a valley one day when a radio falls from a plane. Once he tunes into a particular station, he can’t believe what he hears at all. He starts dancing to that fine, fine music, and so on. He breaks out a koto/guitar from the village storeroom and gets to strumming, which gets to annoying his dad. But the old man’s a softie, and gives him a bus ticket to the big city, where he hopes to go to Rock Park and learn from his new idol, rotter rock star Angus Scattergood. The arrival of Bodi attracts the notice of a wolf pack, led by Linnuxx (Black), who, having been banished from his mountain source of lamb chops, now runs mixed-martial-arts events in the local sports arena and thugs around ineffectually with his gang. So Linnuxx here sees an opportunity to get back at Khampa. In the meantime, charmingly naïve Bodi flops big in Rock Park, but is reluctantly adopted by pompous Angus (Izzard), who’s having a devil of a time writing his long-overdue new single, and is intrigued by Bodi, whose burgeoning talent sees him creating a very nice blue fire when he strums his guitar.

All this is every bit as silly and innocuous as it sounds, and it goes down, if not like honey, than like very finely spun cotton candy. I had to pay to see this movie like any other civilian. The distributors were not screening it for “digital” press, so despite my protestations that I liked rock, and that while I’m generally more of a cat person I also like dogs, so how bad was my review likely to be, I couldn’t get headway. So I trudged to my local multiplex at two this afternoon. On the way up to the theater I saw a nanny with a gaggle of six-year-olds, and I was like, “Are you guys going to see ‘Rock Dog’? Me too?” And I realized maybe this was not a good look for an overweight man in his fifties by himself to be sporting. In any event, despite all the many things that “Rock Dog” is not—one of which is “filled with rock music;” there are snippets of a Foo Fighters song and snippets of a Radiohead song and one original song and that’s kind of it—I can report that it enraptured and delighted, and most importantly, made quiet, the houseful of little kids and their nannies with which I watched it. If this is an experience your current moviegoing habits call for, see “Rock Dog” with confidence. 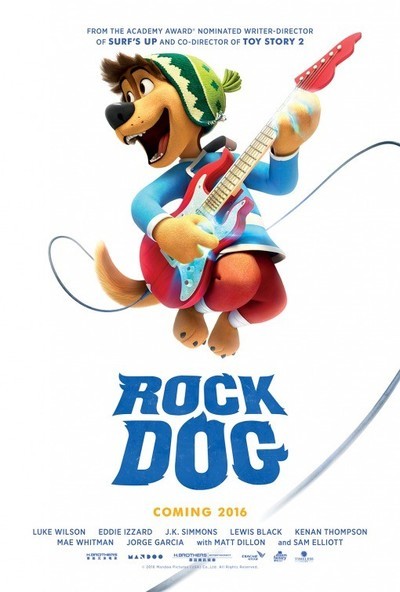 Rated PG for action and language.