In 1991, as New York City stopped in its tracks to follow the trial of mob boss John Gotti, a story briefly took over the front pages, a sideshow to the main event: a crazy in-love couple from Queens, taking advantage of the chaos in the organized crime world, started holding up various Mafia social clubs, pocketing the cash. They knew the Mob wouldn't contact the police. And was it really a crime to steal from such obviously bad guys in the first place? "Rob the Mob," directed by Raymond De Felitta and written by Jonathan Fernandez, looks at the sideshow from multiple angles. Breezy, sleazy, and sometimes-intense, "Rob the Mob" depicts a very specific sliver of time in New York history, a time overrun by crack, graffiti, and omnipresent organized crime.

Tommy (Michael Pitt) and Rosie Uva (Nina Arianda) have recently emerged from short stints in prison for holding up a florist's shop. They are in love. Rosie has gotten a job at a debt collection agency, run by a smiling enthusiastic guy (Griffin Dunne) who likes to hire ex-cons (he himself did time for fraud). Rosie, a woman with an ingratiating supportive attitude and a big laugh which masks her intellectual shortcomings, convinces her boss to also hire Tommy. When money is tight one month, they decide on their reckless quick-cash crime spree. Rosie drives the get-away car and Tommy, wearing a ski-mask, does the stick-up, accidentally firing off the Uzi into the ceiling and back walls. The group of "wise guys" in the club empty their wallets, all while issuing threats of what they will do when they track him down. When Tommy and Rosie go home to their bleak cold-water flat, they laugh and commiserate over how easy it was.

"Rob the Mob" doesn't just stick with Tommy and Rosie. It looks at their crime spree from the perspective of the dogged Federal agent (Frank Whaley) searching for specific Intel on the structure and hierarchy of the New York crime families. We also meet a journalist named Jerry Cardozo (an excellent Ray Romano) who has been covering the Mob for 30 years, and writes a front page story about the mysterious criminal duo, naming them "Bonnie and Clyde". He is shocked when, one day, Rosie calls him at his desk to correct one of the facts in his story. We also get scenes of the paranoia within the Mob, brought on by the one-two punch of the Gotti trial and the sudden crime spree. The Mafia here is headed up by a reclusive boss with a mysterious past named "Big Al" (played by Andy Garcia, with a white Ernest Hemingway beard in a performance of coiled intensity.)

During one of their stick-ups, Tommy and Rosie steal the wallet of a guy named Joey D. (Burt Young). In the wallet is a folded piece of loose leaf paper, and on it is written what becomes known as "The List": a family tree of the Mob, its internal structure, its command set-up. Private home phone numbers are listed. As the Gotti trial goes on downtown, police and FBI work overtime trying to figure out who reported to whom in the organization, and, of course, there is no H.R. department. "The List" would represent the break they need. But Tommy and Rosie, whose bravery explodes into increasing delusional mania with each successful stick-up, decide to use "The List" as a bargaining chip with the Mob, and they start making threatening phone calls to everyone on it.

"Rob the Mob" romanticizes Tommy and Rosie, filming them in slo-mo dancing through raining dollar bills, and kissing in the rain on a deserted Coney Island boardwalk, but the couple lacks the iconic power of other famous crime-spree cinematic duos, including their namesake. The romantic treatment of some of their scenes and the sentimental soundtrack is all counter-acted by casting Pitt and Arianda, who inhabit their roles familiarly, grubbily, easily. Both actors portray characters who are clearly not smart, not even a little bit, but they do so without being patronizing about it. You don't get the sense that they, the actors, are "slumming". Tommy and Rosie have no self-awareness, and no powers of self-reflection. Tony award-winning Arianda, in particular, is fascinating to watch. She was fascinating to watch in her small part in "Midnight in Paris," where she droningly and happily repeated whatever her snobby husband said. Arianda's Rosie is filled with enthusiasm and support for those around her (watch, in particular, how she butters up her boss, cheering him on like they're at a pep rally), and despite her initial resistance to Tommy's plan, she finally embraces it wholeheartedly. She's not killing anyone. She's stealing from bad men. "What's the crime in that?" she asks Cardoza, grinning at him chummily over her slice of pizza. Arianda shows Rosie's shallow grasp of abstract concepts in a frozen smile and confused flicker in her eyes when confronted with something she doesn't understand. Cardoza says to her, "We got a saying in the newspaper world--" and she cuts him off, brightly, supportively, missing the entire point: "I love sayings! Slogans!"

The rest of the cast is populated by stalwart long-time New York actors, grounding the film in its location and era. Cathy Moriarty shows up in a heartbreaking cameo as Tommy's devastated mother, wrecked by a lifetime of disappointment and violence. Moriarty gives another unforgettable cameo performance in the upcoming "The Double". It's exciting to think of the direction her career is taking.

"Rob the Mob" is too cutesy a title for this dark grubby little tale. 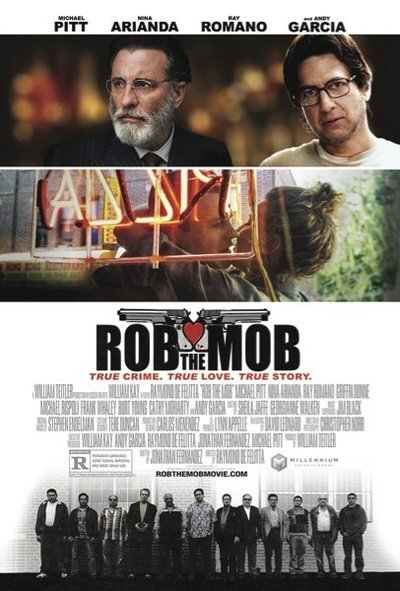