If you go see "Roar," a now-infamous 1981 ethnographic action film starring untrained wild cats, you probably will go expecting to see a memorably weird curio. This is a movie with a poster, commissioned by the cult film buffs at Drafthouse Films, that uses injuries sustained by 70 cast and crew members as a selling point (the poster's tagline: "No animals were harmed in the making of this film. 70 cast and crew members were."). "Roar" may often feel like a bizarre Swiss Family Robinson adventure, but the real reason you should go see it is its surplus of lions, and tigers, and cheetahs (oh my!). I confess that, as a feline aficionado, I got what I wanted from "Roar:" lots and lots of big cats. There's not much to the film beyond that, though knowing that the film's hulking furry stars weren't trained does add an element of suspense to an otherwise slack thriller. Still, if you want to see cats chasing people in packs, falling over themselves to descend stairwells, and jump up trees to swipe at disposable human protagonists--you will probably enjoy "Roar."

What, you want more information? Jeez, let's see...well, the movie has a plot. Kind of. Hank (writer/director Noel Marshall), a feline-loving eccentric who lives in a treehouse-like habitat over-run by cats, is attacked by two warring tribes of lions when Hank's wife Madelaine ("The Birds" star Tippi Hedren) and children visit him. These lions are supposed to be indiscriminately bloodthirsty, as we see from the blood matting their manes. So the bulk of "Roar" plays out like a circuitous, and very strange "Scooby Doo"-like chase that ultimately asks viewers to marvel at the majesty and wonder of baby wild cats, and their adult counterparts. This is no small feat given that "Roar" is also a film in which a trio of lions chase one human victim into a barrel full of water, and then proceed to lap up the water. And it's supposed to be funny.

It's telling that "Roar" begins with a disclaimer that credits its four-legged stars as co-writers and directors. The film's animal performers determine the pacing of the film, so "Roar" understandably stops and starts on a whim. In some scenes, you can see human actors trying to hide real-life fear of animals that are literally crawling out of the rafters, like the scenes where tigers pursue one character as he flees on a motorbike. In other scenes, the cats don't behave as adversarially as they should, and it shows in the way they're embraced by their two-legged counterparts.

I can afford to make these armchair observations based solely on the heavily-edited footage that Marshall assembled. From where I, a second generation audience member, sit, the cats in "Roar" look dangerous, playful, and unpredictable. They're also not exactly star material. Even the most unabashed cat buff will probably find their minds wandering periodically since so many scenes in "Roar" feel like too much of a good thing.

To enjoy this film, you have to accept the fact that eventually, you will mentally check out and start wondering who was hurt on-screen and who wasn't. If you're stubborn and/or bored enough, you may even create an imaginary supra-narrative about what happened behind the scenes based on decades-old accounts of the film's troubled production. For example, try to watch extreme close-ups and action shots of cameras launching towards lions and lionesses with the knowledge that cinematographer Jan de Bont (director of "Speed") was scalped and given 120 stitches after being attacked by a lion. Or maybe watch Marshall and Hedren knowing that they divorced a year after "Roar" debuted in 1981, and that both actors sustained injuries during the shoot (though Marshall's were more debilitating).

I encourage curious viewers to mentally twiddle their thumbs while they watch "Roar" instead of skipping Marshall's folly entirely because "Roar" is worth seeing once. It's a hard sit because, while it is a cat lover's delight, it's also pretty dumb. Humans run, make noises, and run some more while big kitties flex their muscles, and frolic in unbelievably large groups. You may get what you pay for if you watch "Roar" looking for freakish spectacle. You may also feel like a rube who just got fleeced at a carnival side-show. 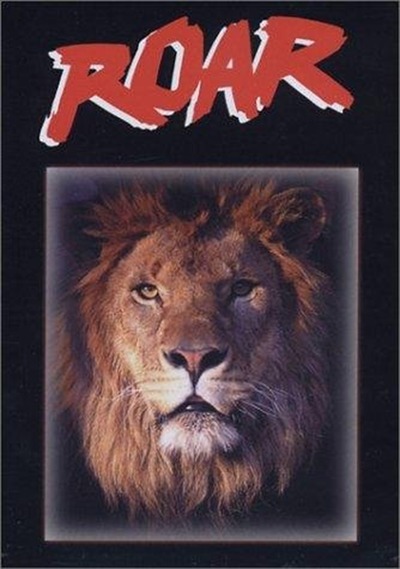