Writer/director Andrew Bujalski's latest film, "Results," is his first to feature established actors (Guy Pearce, Cobie Smulders, Kevin Corrigan), and it is his version of a rom-com. What that means is that romance is a series of messy encounters and bizarre interludes, with buried motivations running the show. Human emotions are a mystery to these characters. They don't know how to speak the language of the heart, which (coincidentally) makes them seem more "real" than most characters in movies. In conventional rom-coms, when a character makes a heartfelt speech, it is articulate and cathartic. In "Results," the characters (most of whom are physical trainers) fall back on fitness metaphors, and even as they do so they know that they aren't quite getting to the heart of the matter. Words help you access your emotions and these characters, for the most part, don't have the words. It's a very Bujalski-esque quality, awkward, prickly, irritable. "Results" doesn't have the inventiveness of "Computer Chess" (2013), and in some cases Bujalski feels out of his depth in "Results," but perhaps that is just where he needs to be. "Results" is not entirely successful (the two main plots don't quite fit together) but it does have a charm and a style that works. In its own weird way, it is quite romantic, while acknowledging that romance is sometimes unpleasant, always messy, and hooking up with someone represents the beginning of a lifetime of getting into messes and digging oneself out. That quality alone makes "Results" a really refreshing film.

Taking place in Austin, Texas, "Results" introduces us to a close-knit, argumentative group of personal trainers, who all work at Power 4 Life, a gym created by the ambitious and helplessly inarticulate Trevor (Guy Pearce). Trevor has big plans: He wants to be a guru. He wants to create an entire "philosophy" for fitness and wellness, although he can't really articulate what that philosophy is. He wants to expand his gym to include juice bars and psychiatrists on call. The personal trainers who work for him are at each other's throats in competition for clients. When we first meet Kat (Cobie Smulders), she's on her daily run, and she chases down a car she recognizes to demand that the driver settle up late payments. Kat is ferocious and judgmental. Terrifying, really. She's also been sleeping with Trevor, her boss. They both know it's inappropriate, but they can't help it.

Into this cloistered world of extraordinarily fit and driven people strolls the schlubby, sweaty Danny (Kevin Corrigan, in a hilarious performance). Danny is a transplant from New York, recently wealthy, holed up in an empty McMansion, playing his electric guitar in echoing rooms. For unknown reasons, he walks into Power 4 Life to sign up for training. Trevor, acting all shiny and inspirational in that desperate way that characterizes the anxious salesman, asks Danny what he's looking for and Danny, who does not know the lingo of wellness, says that he wants to know how to take a punch and not fall down. Trevor asks, "Have you spent much time in gyms?" Danny laughs scornfully, saying, "Fuck no." Behind Trevor's desk is a poster declaring "NO FEAR EXCUSES SURRENDER," but Trevor's head blocks Danny's view, and Danny expresses confusion why the poster says "FEAR EXCUSES SURRENDER." This small comedic "bit" encapsulates the gap of understanding between the two men. They both speak English, but they can barely understand one another. Kat is assigned to train Danny.

Kat's training sessions with Danny have a similar gap of understanding. Danny does what Kat tells him to do, but her inspirational language doesn't make a dent. It's all empty to him. He starts to obsess on her, watching Youtube videos of her workouts. It's creepy, but in a benign way. Besides, she's drawn to him too. What's Danny's deal? In the middle of the night he puts out messages on a local message board: "I will give you $200 if you set up my television." Someone shows up to do that. "I will give you $200 if you give me a cat." A cat shows up at the door. Danny's journey is so bizarre (is he malevolent? is he just lonely?) that it creates its own force field of energy, and when the film moves away from him to detail the relationship between Kat and Trevor, the film loses some of its charge. Danny disappears from the film for a long period of time, and the film tips over without that counter-weight.

There are a couple of hilarious set-pieces, beautifully filmed and performed, the main one being the chaotic dinner Kat and Trevor have with a Russian body-builder (Trevor's idol) and his submissive wife. Trevor cannot seem to stop speaking in halting homilies of inspiration, and yet he also turns into a cringing sycophant in the presence of his idol, bowing and scraping before the Great Man. The unsmiling Russian shoots down everything Trevor says in an unimpressed deadpan. The wife can barely sit down because she is so busy re-filling everyone's glasses and being a good hostess. Kat and Trevor fight with one another, using the Russian and the wife as sounding-boards. They are the worst guests ever. It's a totally screwball sequence. Bujalski's script is top-notch.

These people, Kat and Trevor, don't know how to feel things. Or, they feel things but then resent the feelings, and go for a run to shake it off. The bond they share starts to make demands, emotional demands, and neither one handles it well or gracefully. This makes them very human. It's strangely touching, to see these two control-freak people submit to the conventions of a rom-com, spouting fitness metaphors the whole way. Love is not neat. It's a mess and "Results" does not try to clean up the mess.

Guy Pearce is very funny in the role of Trevor, a good person who really cares about fitness: he's trying to create a "brand," but he doesn't really understand what that means. He is not a good businessman. When he is asked to explain himself, he flounders, but all with an eager "just hear me out" energy that ends up being charming and almost pathetic. Cobie Smulders, so intimidating in her first appearance in the film, manages to suggest that Kat is in a bit of an existential crisis. She's almost 30. Does she have any plans? Is she good at anything else? And Kevin Corrigan, sweaty and clueless, creepy and benign, brings depth and humor to every line that comes from his mouth. He's the outsider in the main world of the film, but he becomes its compelling center.

Bujalski has carved out a very interesting place for himself in the world of independent film, starting with "Funny Ha Ha" (2002), a low-budget (putting it mildly) film about post-graduates meandering aimlessly through their lives in New York, talking endlessly, kissing each other, getting into messes, and then floundering around in the mess. "Mutual Appreciation" (2005) continued that trajectory, only this time in black-and-white. Most of mumblecore films were shot digitally and featured lots of improvisation, while Bujalski shot his on film and wrote detailed scripts. He is interested in the various forms that make up mainstream film and brings his own unique viewpoint to these well-established forms. "Computer Chess", from 2013, was an experiment in form (Many didn't care for it; I loved it.) Shot on an old Sony AVC-3260 camera and in 4:3 aspect ratio, "Computer Chess" looks like it actually was made in the year it takes place, 1984, and it tells the story of a group of software programmers competing in a computer chess tournament. "Computer Chess" was compelling visually, and extremely out there in some of its plot-points (the cats!), but it was hypnotic, entertaining and intelligent.

"Results" is less focused than "Computer Chess," but in a way that serves its particular story. It is interested in the emotions of people who are not accustomed to feeling emotions (besides irritation). When the characters clamp down on their softness, on their natural affinity for one another, they cause chaos in their own lives. The whole movie is chaos. And that's a good thing. 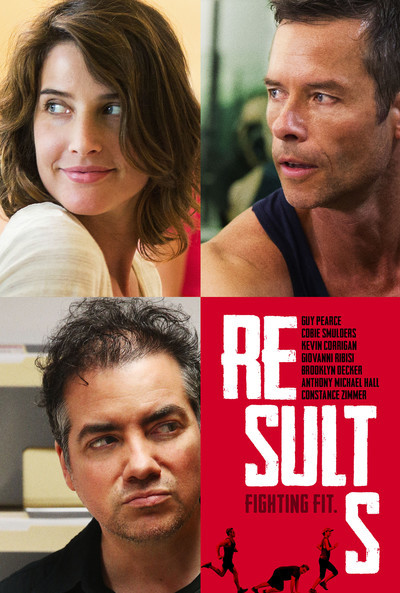