Everybody hates mimes, we have been led to believe. But this is not true, or at least, not quite true. In the training of actors, mime is an important learned skill. And I am told that every young actor, after a period of thorough training, will long carry with them a secret yearning to be cast in a role that will somehow allow them to really show their learned mime skills, despite the fact that everybody hates mimes. It is a curious position.

When we first see Jesse Eisenberg (now in his mid-thirties, incidentally) in “Resistance,” he is wearing a Charlie Chaplin mustache and performing mime. His angry father, a Kosher butcher, pursues him into an alley. “Look at you, dressed as Hitler and performing in a whorehouse.” Eisenberg’s character, Marcel, corrects him about the Hitler/Chaplin confusion and further clarifies that it’s a cabaret rather than a brothel. The time is 1938. The place is Strasbourg, France.

Some older readers may be adding two and two here. A character named …Marcel? Who’s also a … mime? Why yes. And here’s the other contradiction of the truism that everybody hates mimes. Because Eisenberg here is indeed playing the real-life figure who would achieve world renown and fame as Marcel Marceau, the 20th century’s only universally beloved mime. Beloved not just because of his skills and innovations, but because his mime art was one of abundant humanity.

Did you know that Marceau was a real-life war hero? He was. He began working in what became known as the French Resistance well before the Nazi invasion of France, and in secret alliance with the Boy Scouts and Girl Scouts organization helped save the lives of thousands of war orphans. This movie, written and directed by Jonathan Jakubowicz, a Venezuelan filmmaker of Polish-Jewish descent, who also made the 2016 “Hands of Stone,” weaves a couple of other narrative threads around Marcel’s. The movie opens with Elsbeth, a young Jewish girl being reassured by her parents and then almost immediately orphaned. Strangely, we then cut to Nuremburg after the Allied victory, and General George Patton addressing his troops. (Patton is played by Ed Harris.) Did you know that Marcel Marceau was also a liaison officer for Patton during the last days of the war? Well he was. The movie also chronicles the depredations of Klaus Barbie (while juggling, for the sake of themes, some of the facts of his personal life), the Nazi who was nicknamed “The Butcher of Lyon.”

Jakubowicz handles these threads with coherence and vigor. As for its main thrust, well you can imagine what happens when you put a trained mime in a situation where he has to handle a lot of traumatized children. Marcel distracts them with amusing routines, which Eisenberg … uses his no doubt extensive training in mime to recreate.

I know what you are thinking. But no, this is not “Life Is Beautiful.” The joy-in-the-midst-of-tragedy theme is provisional. The movie also portrays Marcel as a genuine fighter. Although it does reach a bit here. There’s a moment where Marcel uses fire eating, the venerable for-mature-audiences circus trick, in a bid to set fire to a Nazi officer. I mean, it could have happened. But as portrayed here, it’s a little on the nose. That said, it’s salutary that the movie doesn’t lean on love-conquers-all platitudes. There’s a crucial scene in which Emma (Clémence Poésy) attempts suicide after enduring torture from Barbie. (The scenes in which Barbie executes and torments prisoners are set in a converted gymnasium and its empty swimming pool; the tiles are shiny, gleaming, giving the sequences an almost futuristic quality of gruesomeness.) After saving her, Marcel explains that seeking revenge is useless; actively saving lives is all that matters. It’s a cogent expression of the proper spirit of resistance—that it should be based in love, but expressed in action. Direct, effective action.

On the other hand, this is also a movie in which a group of characters sits in the back of a van, discussing what it means to be a Jew, and one of them says “Jews are emancipated slaves,” and there’s a cutaway to the only person of color in the van perking up. That is, it’s a bit literal minded. And, yes, mime-heavy. But I give it a lot of credit for being a movie that doesn’t have its head up its own fundament concerning the question of how Nazis should have, and should be, fought. 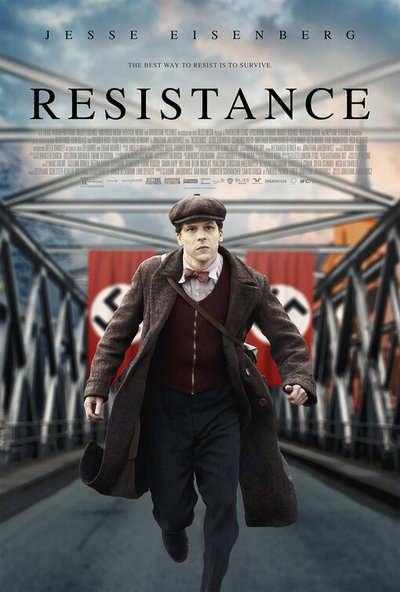