I'm trying to remember what the city was called in the original "Resident Evil" (2002). I don't think it was called anything, but in the new "Resident Evil: Apocalypse," it's called Raccoon City, just like in the original video game. Call it what you will, it has the Toronto skyline. Toronto played Chicago in "Chicago" and now it plays Raccoon City. Some you win, some you lose.

The movie is an utterly meaningless waste of time. There was no reason to produce it, except to make money, and there is no reason to see it, except to spend money. It is a dead zone, a film without interest, wit, imagination or even entertaining violence and special effects.

The original film involved the Umbrella Corp. and its underground research laboratory called The Hive. The experimental T-virus escaped, and to contain it The Hive was flooded and locked. But its occupants survived as zombies and lurched about infecting others with their bites. Zombies can appear in interesting movies, as George Romero proved in "Dawn of the Dead" (1979) and Danny Boyle in "28 Days Later." But zombies themselves are not interesting, because all they do is stagger and moan. As I observed in my review of the first film, "they walk with the lurching shuffle of a drunk trying to skate through urped Slushees to the men's room."

Now time has passed and the Umbrella Corp. has decided to reopen The Hive. Well, wouldn't you know that the T-virus escapes again and creates even more zombies? Most of the population of Raccoon City is infected but can be easily contained because there is only one bridge out of town. The story involves three sexy women (Milla Jovovich, Sienna Guillory and Sandrine Holt), the first a former Umbrella Corp. scientist, the second a renegade cop, the third a TV reporter. Picking up some guys along the way, they battle the zombies and try to rescue a little girl so her dad can pull some strings and get them out of the quarantined city before it is nuked.

We pause here for logistical discussions. In a scene where several characters are fighting zombies inside a church, the renegade scientist comes to the rescue by crashing her motorcycle through a stained-glass window and landing in the middle of the fight. This inspires the question: How did she know what was on the other side of the window? Was she crashing through the stained glass on spec?

My next logistical puzzlement involves killing the zombies. They die when you shoot them. Fine, except Umbrella Corp. has developed some mutants who wear bulletproof armor. Zillions of rounds of ammo bounce off this armor, but here's a funny thing: The mutants do not wear helmets, so we can see their ugly faces. So why not just shoot them in the head? Am I missing something here?

What I was missing were more of the mutants from the first picture, where they were little monsters with 9-foot tongues. They have a walk-on (or maybe a lick-on) in the sequel, but it's no big deal. "Resident Evil: Apocalypse" could have used them, but then this is a movie that could have used anything. The violence is all video-game target practice, the zombies are a bore, we never understand how Umbrella hopes to make money with a virus that kills everyone, and the characters are spectacularly shallow. Parents: If you encounter teenagers who say they liked this movie, do not let them date your children. 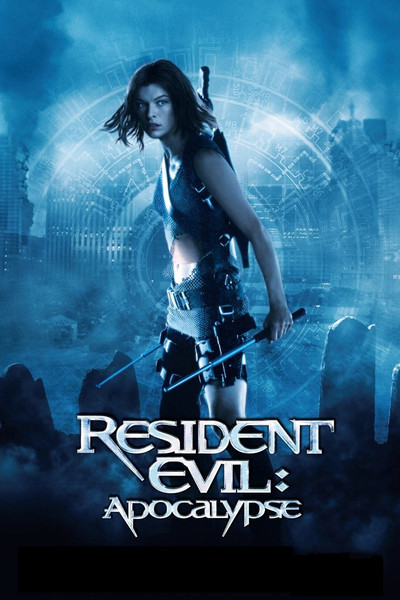 Rated R for non-stop violence, language and some nudity