“Reprisal” is a blandly gritty piece of late-August mayhem that’s as forgettable as its generic title.

Frank Grillo gets top billing in the opening credits over co-star Bruce Willis (who’s barely in the film, to be fair, and even when he’s there he isn’t really there) as Jacob, the manager of a Cincinnati bank that’s the latest target in a robbery spree. The robber (Johnathon Schaech), who’s heavily armed with high-tech tactical gear, starts blasting away early and often, so the hold-up goes down horribly even though it probably didn’t have to be that way. (See: the courtly Robert Redford in “The Old Man & the Gun.”)

A security guard is shot to death; Jacob feels responsible and is haunted by hazy flashbacks. So he teams up with his next-door neighbor, Willis’ James (who’s an ex-cop, naturally), to track this guy down and prevent him from pulling off another heist. But director Brian A. Miller almost seems to be on the bad guy’s side, the way his camera lingers lovingly over the sophisticated weaponry and protective wear the robber has laid out meticulously in his hidden warehouse. Schaech’s Gabriel is stealing the money to help his ailing veteran father, who’s stuck receiving subpar care in a nursing home. That’s about the extent of the character development he (and everyone else) receives in the script from Bryce Hammons.

Perhaps “Reprisal” is meant to be a searing allegory of these stressful times. Probably not, though. It’s more about jittery action sequences that seem almost intentionally disorienting. Beyond the usual shaky cam and first-person perspective that action directors so frequently favor, Miller cuts randomly throughout the movie’s many chases and shootouts, ostensibly to put us on edge, always accompanied by a bombastic score. The result, however, is merely annoying. During one lengthy montage, Miller crosscuts between Jacob and James poring over clues to determine who the robber might be and where he might strike again with Gabriel methodically plotting out his next heist and practicing shooting at various targets. (How does nobody hear this, by the way? The warehouse is in an industrial part of town, but the dude fires off an enormous number of rounds.)

Part of what makes the escalating cat-and-mouse game so ridiculous is that the film presents Jacob early on as a buttoned-down family man. He lives in a tastefully minimalist mid-century modern house in suburbia. He has a beautiful—and distractingly young—wife played by former Miss Universe Olivia Culpo. (Seriously, Culpo is half Grillo’s age. She used to date a Jonas brother.) And they have an adorable little girl (Natalia Sophie Butler) who just happens to be diabetic, which sets up Chekhov’s insulin injection during the movie’s third-act kidnapping. Where does he draw the specific knowledge and general badassery from to take on this well-equipped villain?

That’s partly where Willis comes into the picture—although the legendary star barely registers. At one point, James saunters over to Jacob’s backyard, ever the friendly neighbor with a cup of coffee and a bottle of pills that might help him take the edge off and sleep at night. But James himself might have been dipping into his own stash, given Willis’ somnambulant screen presence. Even when he’s holding a shotgun and blasting away in broad daylight at the film’s climax, he just looks bored. We are, too.

Grillo, star of a couple of the “Purge” movies, has a solid, action-star aura about him. He’s saddled with some clunky expository dialogue here, but he looks the part of the scruffily masculine hero, even as his hair laughably grows taller throughout the course of the film. He’s a longtime supporting player and character actor who certainly seems prepared to step further into the spotlight. Hopefully next time, it won’t be a reprisal of this mess. 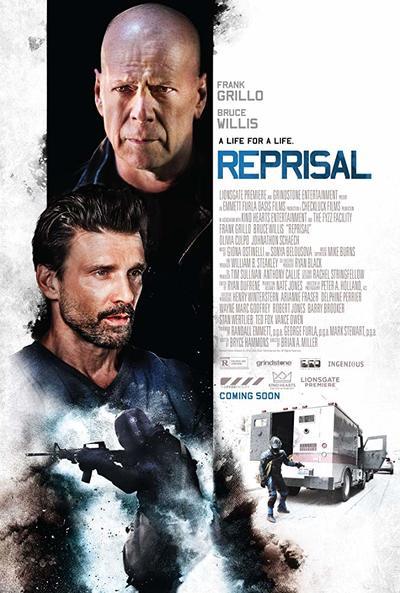