They drive for for hours through mountains and forests and line up days in advance, in the parking lot of Bristol Motor Speedway in Tennessee. They're not here to see a band or a race. They're here to see doctors and dentists who have volunteered for Remote Area Medical, a roving volunteer medical service that was founded by Stan Brock in 1985 to help residents of the Amazon jungle. Things are as bad in the rural US as they were in thje rain forests of Brazil, where Brock once broke his leg and was informed that the nearest doctor was a 26-day journey on foot.

The would-be patients camped out in their cars on the outskirts of the speedway are in bad shape. They have sprains, broken bones, arthritis, skin problems. Many of them have such severe tooth decay that they can barely chew food anymore, and their significant others can no longer muster the nerve to kiss them. They haven't been to a doctor in months, years, ever. "Have you been told before that you have a spot on your x-ray?" a doctor asks a woman who's had her lungs photographed for the first time. "I never had an x-ray," she replies.

Directed by Farihah Zaman and Jeff Reichert—a critic who writes for ReverseShot, where I've occasionally published articles—"Remote Area Medical" is a rare contemporary documentary that is determined to tell by showing. There are no experts weighing in on the medical care crisis that's making the lives of working class and poor people measurably worse, nor are there any charts and graphs explaining how job with benefits that don't require college degrees have been drying up for decades, even as real wages fall in relation to inflation, and the cost of medical care continues to rise.

The filmmakers get all this across by talking to people in the parking lot and inside the medical tents. A few of their subjects (including Brock) are affiliated with the organization, but most are patents, or friends and family of people who've come along to supper the patients as they wait and wait for treatment. And from these subjects, you find out all you need to know to appreciate the magnitude of what RAM is doing, and the scope of the crisis affecting the rural poor.

"We don't have jobs here, and the jobs that are available aren't paying living wages," one patient says. A woman tells us that her job pays so little that she regularly has to choose between paying for food, shelter or other expenses for herself and her kids—a choice no person should have to make. A woman who just got a sebaceous cyst removed from her face poses for a picture with doctors, instinctively using a strand of hair to cover the spot where the cyst use to be (it's just a scar now, and she's happy to have it). She tells the filmmakers that she didn't attend her daughter's graduation because she didn't want her to be embarrassed by her mother's appearance. Another woman comes to the stadium hoping to have all of her rotting teeth pulled and replaced with dentures. She has to settle for having the five worst teeth yanked. Afterward, she weeps from shock and gratitude.

"Remote Area Medical" has a kind of artistry that might not be immediately apparent to viewers. It's of a sort last seen in the 1980s, in great theatrical documentaries shot on film, like Barbara Kopple's "American Dream." Such movies upheld the traditional documentary ethos built up in the '60s, by pioneering nonfiction directors such as the Maysles brothers, D.A. Pennebaker, and Frederick Wiseman, artists who went to surprising places, interviewed or observed fascinating people, then went into the editing room and let an accumulation of data create a picture for us, rather than goosing their message with re-enactments, zippy music montages, ironically chosen bits of pop music, and storytelling devices borrowed from the world of scripted features.

The movie's only problems are repetitiveness and length. There may not have been enough material here, dramatically speaking, to sustain a whole feature. While every individual subject is at least compelling, and some are riveting, their stories do tend to repeatedly illustrate the same points about the brokenness of the current system. The movie's focus on patients is admirable in the abstract, but after a while, you may wonder if more emphasis on doctors, nurses and organizers might have given "Remote Area Medical" more variety of tone or point-of-view. Nevertheless, this is an important story, elegantly told, sometimes harrowing, always affecting. There are images and people in it that you will never forget. 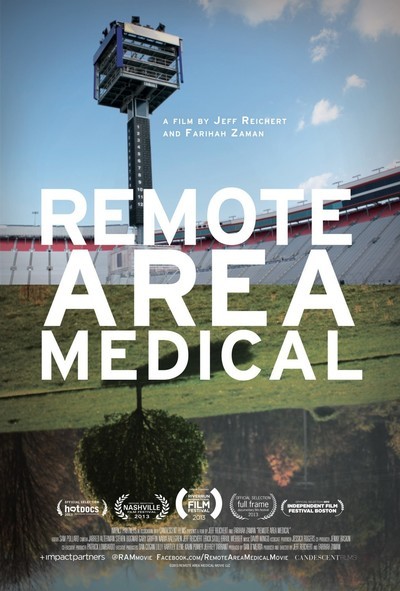