Chicago-based writer/director Michael Glover Smith ("Mercury in Retrograde") works in a filmmaking mode that's been driven to the margins of modern culture. His intimate, actor-driven dramas are set not merely in the real world, but in specific locales, with dialogue testifying to the fact that both the characters and the place have histories that still weigh on them in the present. The movies are ragged and imperfect, alternate awkward and sublime, but when they hit, they strike deep and tear you up. Their budgets probably wouldn't cover one day of catering on a Hollywood blockbuster. And the scripts don't get too hung up on plot, preferring instead to present a string of incidents loosely organized around a theme or notion. His latest, "Relative," could be summed up with the first four lines of Philip Larkin's poem This Be the Verse: "They f**k you up, your mum and dad/They may not mean to, but they do/They fill you with the faults they had/And add some extra, just for you."

Karen and David Frank (Wendy Robie and Francis Guinan) are a sixtysomething couple living in the Rogers Park neighborhood of Chicago and wondering if the retirement phase of their lives will ever begin. Their youngest child Benji (Cameron Scott Roberts)—affectionately referred to as "the mistake"—is about to graduate college and begin a job as a digital cartographer for Google. The Franks' elder son Rod (Keith D. Gallagher) is an unemployed 34-year-old who moved back in with the parents after his wife Sarah (Heather Chrisler), a webcam performer at a sex site, divorced him and took custody of their young boy. Tensions mount when the family throws a graduation party for Benji, which only amplifies Rod's feelings of failure and David's resentment of him for becoming a dependent again. Their daughter Evonne (Clare Cooney) comes into town from Wisconsin with her girlfriend Lucia (Melissa DuPrey), a Black woman, and their mixed-race daughter Emma (Arielle Gonzalez). They're joined by another sister, Norma (Emily Lape), who talks openly to her parents about her perception that the family is disintegrating. They've talked to each other about selling the house but haven't brought it up to the rest of the family.

The film is rather laborious and borderline-cute in how it sets up all the main characters and a few key supporting players—including Benji's love interest Hekla (Elizabeth Stam), a young actress who has a bit of a Manic Pixie Dream Girl energy, and spontaneously decides to accompany him to his graduation party, where she introduces herself to Evonne as a "man trap." The pacing, framing, and overall feeling are more network television than film up until the point when Benji accuses Rod of doing cocaine on the balcony of the family home.

The resultant fight is messy and nasty in a real way that's rarely captured in film. Both performers hurl themselves into the mud pit so heedlessly that it's hard to look at them sometimes, which is as it should be. Benji accuses Rod of being a self-pitying parasite and a victim of his own bad judgment who is too vested in his own failure to move on. Rod says Benji is a privileged favorite son who has no business passing judgment on an older sibling who has suffered more deeply than Benji can even imagine. "Dad calls me a fungus, man!" Rod yells. "A fungus! That fungus starts growing on you." The beautiful and amazing thing about this scene is that both brothers are right and wrong at the same time.

From that point on, "Relative" finds its footing and moves confidently through the rest of the story, the bulk of which unfolds during and after Benji's graduation party, an event that makes the young man so uncomfortable that he disappears from it entirely for hours and does not return until he's practically shamed into it. There are more than a few clunkers intended to set up the next scene or piece of conversation ("So how are you guys feeling about having a nest that's almost half-empty?" "Was there a formative moment where you decided to be an actress?") and sometimes Smith has trouble getting out of one scene and into another one as gracefully as one might wish (except for a 360-degree pan through a house that collapses a couple of hours of screen time—a touch that's Scorsesean in its confidence).

In setup as well as execution, the movie often plays like a less polished, more fragmented attempt to make something like an American version of a film by British dramatist Mike Leigh ("Secrets and Lies"), who liked to get a group of actors together, devise characters and situations in conversations and workshops, and then write a script from the best bits. I have no idea if that's the method the filmmaker used here, but "Relative" has a similarly spontaneous feeling. You believe that these people are part of a family nursing grievances and hiding secrets. They often express themselves in the halting, imprecise, heedlessly cruel manner of actual human beings. By the time the film eases into its final stretch, it becomes a sub-genre of drama that I call "accidental radio," meaning that even though there are pictures, you might not see them all because you're covering your eyes a lot of the time. 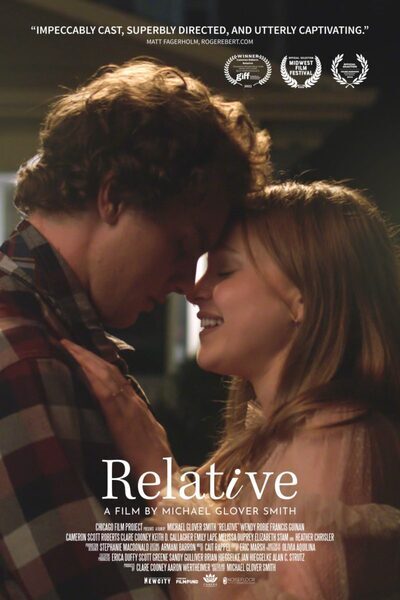