"Red Rocket" is another entry in the subgenre of movies about narcissistic, sociopathic, motormouthed hustlers who skate through life on their looks and/or charm. The main character of this one is Mikey Saber (Simon Rex), a former porn star who looks good for a guy who’s pushing 50 and spent 20 years living like there was no tomorrow. Mikey is coy about what, exactly, brings him back to his hometown of Texas City, Texas, but the fragments of backstory he provides between boasts and lies and mind games suggest he didn't leave Los Angeles of his own volition. He's here to erase his past and start over: the American dream.

Mikey shows up at a bungalow near a refinery where his estranged wife and former porn partner Lexi (Bree Elrod) lives with her aged mama (Brenda Deiss). Lexi refuses him entry, but Mikey keeps chipping away at her sympathies in hopes of getting inside long enough to take a shower and borrow whatever clothes Lexi has that could pass for gender-neutral. Pretty soon he's riding her borrowed bicycle to job interviews and, after bombing all of them, wrangling a gig as a dealer with a weed business run by coolheaded Leondria (Judy Hill) and her enforcer June (Brittney Rodriguez). Soon things are looking up for Mikey. He starts planning for a future that will take him back to Los Angeles to reclaim his lost glory.

Mikey is a person who could tell you that he showed up unannounced in a loved one's life with nothing but the clothes on his back and be speaking literally rather than metaphorically. As "Red Rocket" unfolds, we understand that this is Mikey's default state. Nakedly opportunistic, he clothes himself in others' trust. Everything about him is a lie, from his supposed fame (he says his videos have an "81% click-through rate") to his erections (courtesy of boner pills). He keeps making a mess of things and then fleeing the disaster site, helping himself to any money, pot, sex, transportation, or lodging that cross his path.

At this point in their careers, the filmmaking team of director Sean Baker and his regular co-writer Chris Bergoch have built an impressive library of realistic movies about the rainbow coalition of the American underclass. "Red Rocket" is the latest entry. It's often laugh-out loud funny, thanks to Mikey's shamelessness and others' reactions to it. ("Your mother's starting shit with me, can you please inform her that I'm not a dick?" Mikey hollers at Lexi. "Why would I lie to my mother?" Lexi says.)

But it's also, in certain ways, the least of the list. The midsection of this rambling 130-minute film, wherein Mikey ensnares a freckle-faced 17-year-old donut shop employee named Strawberry (Suzanna Son) and schemes to take her to LA and turn her into a porn star, is one-note and repetitious. And there are moments in the sexually graphic "Red Rocket" where, if the filmmakers aren't exactly endorsing their protagonist's middle-aged, borderline pedo-pimp obsession with Strawberry, they're not being as rigorous about mediating it as they should. It's also not clear from the writing of Strawberry if we're supposed to read her as a sexually precocious and manipulative waif-fatale—i.e. a Mikey in the making—or if she just pretends to be one because it excites Mikey and makes her feel bold and worldly.

Baker and Rex instantly establish Mikey as one of those grifters who presents himself as a sweet overgrown boy with a prodigious tool and an ice-cream face but will ruin your life and not look back. (In one of the script's only bluntly allegorical touches, the action is set during the presidential campaign of 2016; the voice of Donald Trump, the Mikey Saber of both business and politics, is heard throughout.) But pretty soon we figure out that the script doesn't have a lot to add to that first impression. Like other works in this vein, such as "Mississippi Grind" and "Roger Dodger" and the Safdie brothers' scripted output, "Red Rocket" peels a rancid onion. The answer to the question "What will the next layer reveal?" is always the same: more slime.

Still, the opening and closing sections of "Red Rocket" are such perfectly tuned black-comedy contraptions that watching them unreel is as much of a vertigo-inducing experience as the rollercoaster ride that Mikey and Strawberry take at an amusement park.

And, despite its missteps, this is Baker's best-directed film, judged purely in terms of how economically he sets up and pays off each mile marker in the story, often getting in and out of a scene with two or three elegantly choreographed but unpretentious shots. The wide-and-narrow frame creates a mock-epic feeling. Featureless highways and flat grasslands and flame-belching oil refineries are unveiled if something heroic might happen there, which makes the spectacle of Mikey screwing up and doubling down funnier.

The cast (which consists of a few professionals and many likable first-timers) is arrayed against real-world locations that contextualize Mikey’s scheming, screwing, and hustling within the spectacle of American decline. Mikey glides through the gutters of a country where a handful of people have a million times more than anyone needs, and everyone else is one layoff or diagnosis away from homelessness. From that vantage point, you can see why Mikey would be hell-bent on grabbing every fleeting moment of pleasure and triumph he can, however he can.

Cinematographer Drew Daniels ("Waves”) shoots the entire production on 16mm film, in creamy/grainy images that connect it to the 1970s charismatic bastard flicks that Baker and company have obviously studied like scripture. If you crossed Joe Buck from "Midnight Cowboy" and the title character of the modern western "Hud"—both Texans, as it happens—and then bashed him in the head a few times with a huge cartoon mallet, you might end up with Mikey, who has become a six-foot, two-inch, ambulatory version of the part of his anatomy that he used to make a living with, and that doesn't work anymore unless he pumps it full of drugs.

The inciting disaster that sets off the third-act domino-chain of Mikey's comeuppance is one of those instances where the cosmos hands a serial screwup a metaphor for their life but they're so lacking in self-awareness that they don't get the message. He's like a film noir grifter dying at the foot of a street sign that reads "Dead End" and saying, with his last breath, "I didn't realize this was a cul-de-sac."

If the Oscar for Best Supporting Actor could go to an animal, Lexi's shiner-eyed bulldog would be a contender. Sometimes when the movie has generated a belly-laugh from his hero's snowballing distress and you think it can't crank things up higher, it cuts to the pooch staring at Mikey, as if it knows the man better than he knows himself. 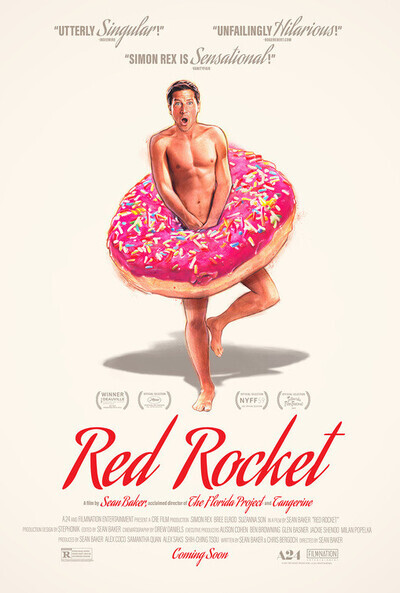