Here’s a film I guarantee won’t be streaming on Disney+ anytime soon. The company’s former CEO Michael Eisner denies that many of the events recounted in “Red Penguins,” the fourth feature directed by Gabe Polsky, actually took place, and to be fair, it’s difficult to believe in a good deal of the information being fed to us here. With its jaunty score and comic sound effects—a few of which are notably forced—this documentary unspools a so-crazy-it-must-be-true yarn on the order of the Fyre Festival or the abusive cat breeders in “Tiger King.” It invites us to laugh at the bone-headed decisions made by greedy individuals—that is, until the bodies start piling up and the story’s underlying themes prove to be chillingly resonant. Whether or not certain events played out precisely as we’re told, the urgency of Polsky’s cautionary message is inarguable.

In certain ways, the picture is an unofficial follow-up to the director’s equally fascinating 2014 documentary “Red Army” about the Soviet Union’s hockey team and how it was utilized for the purposes of government propaganda during the Cold War era. Having become disillusioned by Russia’s retrogressive communism, Polsky’s own parents immigrated to the United States in 1976, one year prior to the Red Army welcoming Viktor Tikhonov—a key figure in both films—as its new coach. As he states in the film’s production notes, Polsky views “Red Penguins” as the reverse of his parents’ story. Whereas they came to America not knowing a word of English, the American subjects of this movie are equally adrift in Russia, unaware of the danger encroaching on the imminent horizon. Once film producer and Pittsburgh Penguins co-owner Howard Baldwin conceived of the idea to invest in the newly formed Russian Penguins hockey team, as the sport struggled to find funding following the 1991 collapse of the USSR, marketing expert Steven Warshaw was recruited to be Baldwin’s man on the ground in Moscow.

As soon as we see Warshaw strutting down the street, awkwardly motioning for various young female pedestrians to pass by him in the shot, his penchant for showmanship is immediately apparent. He sure puts on a good show for the cameras, though it’s impossible to know just how many of his claims are legitimate. He arrives in Russia at the precise moment its lack of stability triggered by the sudden shift to a free market economy has thrust the nation into chaos, yet his focus remains solely on getting butts in seats. When the first game of the team’s inaugural season in 1993 turns out to be as sparsely attended as Trump’s Tulsa rally, Warshaw turns to more sensationalistic methods of upping the spectacle. After stumbling upon the existence a strip club in the bowels of the stadium, Warshaw hires a number of its employees to strip on the ice at games. He also has actual bears from a nearby circus guzzle down the team’s sponsored beverage at the arena, though as evidenced in the footage, they don’t appear to be chugging the beer themselves (as Warshaw recalls) so much as have it poured down their throats. When a drunk guy foolishly begins taunting one of the bears, he ends up losing a finger.

So profitable do the Penguins quickly become that they reportedly caught the interest of Eisner, whose love of hockey and creation of the Mighty Ducks NHL franchise led him to explore the Russian team’s merchandising potential. According to Warshaw, Eisner saw a “$100 million licensing property” in his proposed deal with the Red Army Club. He apparently offered to have the Disney Imagineers help make the Russian Penguins’ cutesy logo appear more “bellicose,” and even pitched his idea for “Mighty Ducks 5,” where the team travels to Moscow and one of its members falls for a Russian player before their romance is thwarted by expired VISAs. This title is especially odd since the second and third films still had yet to be released, though perhaps it does speak to Eisner’s desire in churning out a “Rocky”-esque franchise that cares little for decent plotting as long as the brand is lucrative. Indeed, we do see a photograph of Disney executive Kevin Gilmore with Howard, who supposedly traveled to Moscow together.

Polsky’s skill in mining the darkly humorous shades of disastrous hubris is not all that surprising, considering he produced Werner Herzog and Nicolas Cage’s funniest film to date, 2009’s “Bad Lieutenant: Port of Call New Orleans.” The most hilarious sequence in “Red Penguins” concerns Tikhanov, whose fierce dedication to the sport and complete disinterest in Warshaw’s tasteless gimmickry reminded me of Bob Balaban’s exasperated community theatre director in “Waiting for Guffman.” To give his curmudgeonly image a makeover, Warshaw makes Tikhanov the spokesperson for Vicks cough drops in a ridiculous ad that the coach loathed, which is laughingly recalled by the team’s general manager, Valery Gushin. It is Gushin’s revealing interview that serves as the film’s turning point. His nickname for Warshaw translates to “an asshole with a handle,” supposedly because he could be carried around at will. As the Russian mafia starts taking control of the team, Gushin has a spy present in Warshaw’s office, watching his every move. “Don’t ask questions,” Warshaw is told, “or you’ll be hanging from your thumbs from the top of the arena.”

When Polsky mentions this to Gushin, the manager dissolves into tearful guffaws, the very kind one imagines Putin having at our expense. While Gushin admits that Warshaw was a good man, he affirms in all seriousness that “there is no such profession as A Good Man.” The title of Baldwin’s Pittsburgh-set Jean-Claude Van Damme vehicle, “Sudden Death,” could’ve easily applied to this tale, as numerous people involved with the team are bumped off by the mob. The head of the Central Sports Army Club, Alexander Baranovsky, cooly refuses to grant protection to the Americans, and his sentiments are shared by Russian businessman Alimzhan Tokhtakhunov, who has alleged ties to organized crime. His words accentuate the overarching tragedy for which the short-lived rise and swift downfall of the Russian Penguins serves as a microcosm. The democracy imposed upon Russia was rejected by its people, leaving it open for the mafia and ultimately Putin to seize control. Two decades before his ally in the White House would threaten to delay the U.S. presidential elections, the newly christened Prime Minister wishes Russia a “Happy New Century” on the eve of 2000. It’s as disquieting an epilogue as any I’ve seen this year. 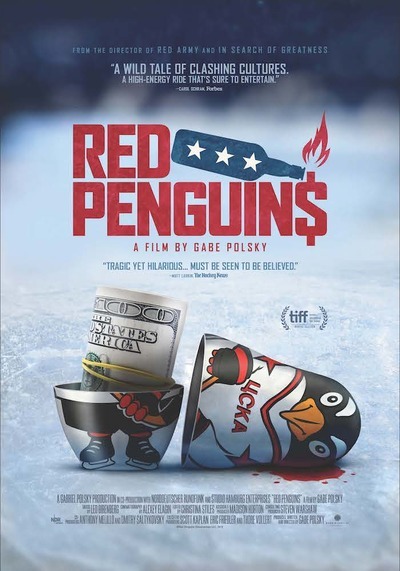