When the CEOs and proprietors of the great wine chateaux in the Bordeaux region of France talk about what they do in "Red Obsession," a new documentary directed by David Roach and Warwick Ross, they sound like poets and mystics. One says that you "need to bring so much love to your vineyard." Standing amidst the vines, another says, "There's a vibration here." One speaks of having a visceral sense of the history of the area, of the early ancestors who figured out the proper way to bring the grapes to fruition. Narrated by Russell Crowe, "Red Obsession" takes us through the background of the wine-producing capital of the world, its history, its dependence on capricious elements (like the weather, the global economy), and the challenges facing the area due to rising prices and crumbling markets.

"Red Obsession" opens with an elegant tracking shot of a dark warehouse filled with wooden barrels, as Joss Stone moans "I Put a Spell On You." It's sexy, a fitting opening for a film about obsession, about wine-mania, about people who live, breathe, eat, think, drink wine. The footage of Bordeaux is awe-inspiring, with aerial shots of the great chateaux and the vineyards. Closeups of the labels from the different chateaux abound, along with luscious shots of glimmering wine being poured. The obsessive nature of the entire industry is reflected in these shots, a good marriage of theme and form.

Through interviews with wine journalists and chateaux proprietors (including Francis Ford Coppola), we learn about the business, its ups and downs, its competitions. Journalists talk about how difficult it is to describe wine, even though it is their business to do so, and they too sound like poets or mystics. "A wine is like a voice, an instrument with a timbre..." The chateaux work with the journalists, holding wine-tastings of each new vintage, waiting for the verdict. The proprietors of the chateaux are clearly international businesspeople in one respect, but in another respect they are farmers, who understand that you have good years and bad years. Much is out of your control. The pressure is enormous to keep producing stellar wines, but when you are dealing with nature you cannot always guarantee the results. One of the real issues in recent years is that the prices of the bottles of wine have risen so astronomically that they have become too valuable to drink. People now buy bottles of wine as investments, rather than something to be shared at a special occasion.

The economic collapse of 2008 and 2009 has impacted the Bordeaux region in an immediate way. Americans stopped buying expensive wine en masse, and up until then America was the major market for Bordeaux wines. But another market has exploded, almost overnight, in China. The second half of the film is devoted to the wine-mania in China, the cutthroat wine auctions in Hong Kong, the entrepreneur (he made his fortune in sex toys) whose wine collection is worth 60 million US dollars.

Bordeaux wine-manufacturers may talk like poets and mystics but they are practical people of trade, and recognized that China was a new market with unlimited possibilities. The cities in China are shown with a frenetic speeded-up film, lights buzzing along the highways and glittering off and on in the skyscrapers, quite a different dynamic from the stately footage of Bordeaux. Wine is going for such high prices in China that the folks back in Bordeaux are concerned. The prices are becoming divorced from reality, a clear sign that a speculative bubble may be forming. This is a controversial issue, and the talking heads, Chinese and French, argue it out from across the globe.

The narration is simply done, providing us with the necessary context to understand the interconnectedness of this world, its history, its reliance on weather, politics and trade agreements. Informative though it may be, "Red Obsession" is a moody and emotional piece of work. Clouds race over the French chateaux, clouds of change. Obsession keeps Bordeaux in business, but obsession can be unreliable. What happens if China loses its interest in wine and moves on to something else? 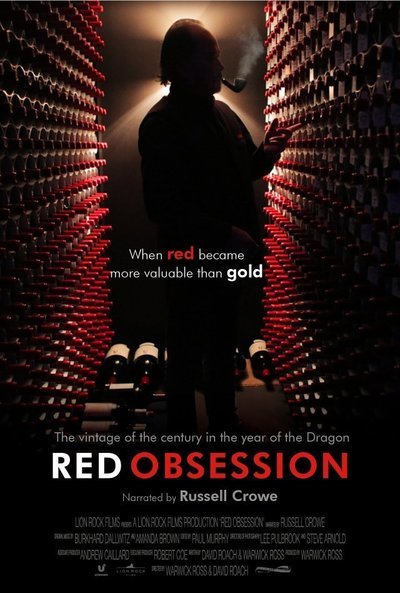