Raiders!: The Story of the Greatest Fan Film Ever Made

26 years before Gus Van Sant’s misguided shot-for-shot “Psycho” remake, three kids from Mississippi decided to apply this tactic to “Raiders of the Lost Ark." Their modest project took seven years, during which time they set fire to their houses and burned the bridges of their friendships. Decades later, a VHS tape of the entire film, minus one scene, found its way to filmmaker Eli Roth and Ain’t It Cool News’ Harry Knowles, who showed it to enthusiastic audiences at fan festivals. Teaming up with Alamo Drafthouse founder Tim League, Roth and Knowles sought out the creative mimics behind “Raiders of the Lost Ark: The Adaptation." Directors Jeremy Coon and Tim Skousen chronicle this story in their documentary “Raiders!: The Story of the Greatest Fan Film Ever Made.”

“Raiders!” begins with an onscreen introduction by John Rhys-Davies, who played Sallah in the original “Raiders." Dressed in a black pinstriped suit, Rhys-Davies looks like a carnival barker inviting the viewer to venture into a funhouse furnished with childhood obsession and rampant fandom—if we dare. Next, we meet Chris Strompolos and Eric Zala, two of the main characters responsible for the shot-by-shot adaptation. Now in their 40’s, they wish to return to their home town, reunite their original cast and shoot the one scene they were unable to recreate. This scene involves a plane, huge explosions, a brutal fistfight and an unlucky combatant’s gory demise by propeller. It’s one of the most exciting sequences in a film chock full of exciting sequences, and rather than use models for their version, Strompolos and Zala were committed enough to leave it out because they couldn’t do it with a life-sized prop the way director Steven Spielberg did.

In their first scene, Strompolos and Zala are shown soliciting money to finish their vision. “We’re going to shoot the entire scene up to the explosion, then cut it into the existing film,” Strompolos says. “It’ll be like a time warp,” says their potential investor. Since their film was shot, out of order, over seven years, inconsistencies in age occur from scene to scene in the near-finished product. But none will be as glaringly inconsistent as the sudden appearance of fortysomethings temporarily usurping the roles from their much younger counterparts. Luis Buñuel would be proud of this cinematic trick.

“Raiders!” alternates between first-person accounts of how the adaptation came to be and the problems of trying to shoot and finance the airplane scene. While the constant rainy weather of Ocean Springs, Mississippi threatens to derail the current project, stories from the past paint a picture of how these best friends drifted apart. Zala, who directed and played Belloq, and producer/star Strompolos chose different paths in life, their separation accelerated by the cruelty teenagers can inflict on one another. The filmmakers reveal the sometimes harrowing circumstances of adulthood in good, dramatic fashion, contrasting them with the childhood fantasy their subjects are trying to complete.

Providing commentary that occasionally dissents is the third major figure in the adaptation, cameraman and special effects supervisor Jayson Lamb. “Chris and Eric have eliminated him from the major part of this project,” says Chris’ Mom, “but at one point, they were a trio.” Lamb airs his grievances, then “Raiders!” switches to Chris or Eric for rebuttal. There’s a bit of suspense in whether Lamb will join them for this final scene, and what will happen if he does. Everyone has their perceptions, but equal time is given to all the principals. Surprisingly, their parents also provide insight into their childrens’ relationship.

At one point in the film, Coon and Skousen play audio of what sounds like radio jocks discussing “Raiders of the Lost Ark: The Adaptation." “What a waste of time,” says one jock. “Who wants to see a crappy version of this when the real one exists?” This was my exact thought when I was assigned this review. “Raiders of the Lost Ark” is the best time I’ve ever had at a movie. It hit me at the right age, in the nearly perfect summer before my last year of grammar school. Couple that with my inability to understand the nature of cinema-based fanaticism, the kind that would treat an all-female remake of “Ghostbusters” as if it were the Apocalypse, for example, and “Raiders!” sounded to me like the seventh layer of Hell.

It may sound that way to you as well, but this is a smartly made movie that might win you over. I was pleasantly surprised, because there’s something truly Spielbergian about it. Not in its filmmaking, mind you, but in its storytelling. The filmmakers make a conscious effort to highlight how much their story has in common with Spielberg’s cinematic universe. As “Raiders!” progresses, you can easily pick out the references. There’s the sense of movie-making wonder and fascination exhibited by its subjects, kids from divorced homes whose mothers took care of them and tried to make ends meet. These lost boys gravitated toward one another, fueled by a shared interest that passes the time and invites camaraderie and mischief. Ocean Springs, Mississippi even feels like the Spielberg Town, U.S.A.’s that housed characters from “E.T.” to “The Goonies."

This summer is bearing witness to documentaries that explore the minutiae of fandom and the sometimes insane heights to which it elevates people. We’ve already had “Elstree: 1976," which would make a good double feature with “Raiders!” And while I can’t say Coon and Skousen convinced me to seek out the film within their film, I don’t think that was their intention. Instead, “Raiders!” is a love poem to film geeks everywhere, giving them heroes whose own geekdom is a pinnacle of aspiration. 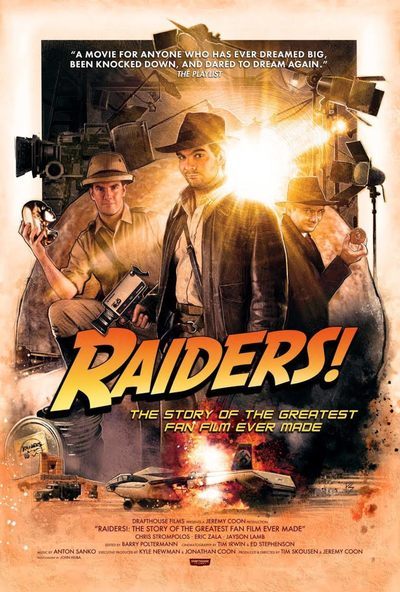 Raiders!: The Story of the Greatest Fan Film Ever Made (2016)

Eric Zala as Himself

Jayson Lamb as Himself

Angela Rodriguez as Herself

Eli Roth as Himself

Harry Knowles as Himself

John Rhys-Davies as Himself