How much blood must be shed upon a piece of sacred land before it can no longer be deemed “sacred”? The answer, I’m afraid, is blowin’ in the wind rustling through Jerusalem, as the Israeli-Palestinian conflict continues to claim lives in the name of religious righteousness. Few people have explored this self-perpetuating cycle of violence from as humanistic a perspective as Amos Gitai, an Israeli filmmaker of profound importance. Though his latest work will likely be a tough sell for many audiences, with its deliberate pace and long running time (clocking in at 153 minutes), the movie portrays a two-decade-old tragedy that directly reflects the zeitgeist of modern-day terrorism fueled by the cult of extremism. It is a cult that transcends all theological boundaries, as demonstrated by footage of various Israelis displaying nationalistic hatred similar to that of the Nazis, despite the fact that their descendants happen to be Holocaust victims.

This brutal irony permeates through every frame of Gitai’s sprawling political essay, “Rabin, the Last Day,” which garnered the Human Rights Film Network Award at last year’s Venice Film Festival. Evoking both the courtroom dramas of Stanley Kramer and the historical epics of Steven Spielberg (particularly “Munich”), “Rabin” is preoccupied with the minutia of corruption that has gradually eroded the soul of Israel. The assassination of its Nobel Peace Prize-winning Prime Minister, Yitzhak Rabin, on November 4th, 1995, was hardly the result of one bad apple evading the gaze of security. Rabin’s determination to begin a peace process with Palestine under the Oslo Accords caused him to fall into the crosshairs of enraged Israelis. Drawing on his rich background in documentaries, Gitai masterfully mixes staged scenes with archival footage, which lends a sickening sense of dread to the sequence charting Rabin’s doomed walk toward his van, following a triumphant rally in Tel Aviv. A 25-year-old law student, armed with a gun, managed to remain undetected for a full forty minutes in the crowd gathering outside the arena before he opened fire on Rabin. A camera perched high above the street surveys the carnage from a Haneke-esque wide angle before Gitai seamlessly shifts to the ground below, following the dying man as he is rushed to the hospital.

As Abigail Disney’s essential documentary “The Armor of Light” indelibly illustrated last year, it is far easier to give into fear than risk engaging with others. A firearm kept tightly at one’s side serves as a comfort while simultaneously stunting one’s growth. It’s clear that the assassin, Yigal Amir (chillingly played by Yogev Yefet), believes that he committed a heroic act, and can barely contain his glee while being cross-examined. His choice to shoot Rabin in the torso turns out to have been ideologically motivated, as suggested by a scene where Amir reads a Torah passage describing the precise organs that would be hit if he aimed at his victim’s fifth rib. We also see a group of rabbis solemnly partaking in a Pulsa diNura ceremony designed to bring about a death curse on Rabin (apparently the same one was used on Trotsky). Some of the dialogue in these scenes is so absurdly wrongheaded, it could’ve easily been found in Ronit and Shlomi Elkabetz’s wonderful “Gett: The Trial of Viviane Amsalem.” Yet unlike that crowd-pleaser, which blended scathing satire with stark drama, nothing in Gitai’s film is a laughing matter, though that doesn’t stop some vignettes from reaching a nearly operatic level of looniness.

Dalia Shimko stops the show with her scene as a clinical psychiatrist who addresses a roomful of angry men and makes them even angrier as she proceeds to psychoanalyze Rabin. At first, the measured tone in her voice seems to indicate that her words will inject some much-needed sense into the radicalized discourse. Instead, it soon becomes obvious that the psychiatrist may be the person most in need of getting her head examined, as she labels Rabin a schizophrenic because of his alleged detachment from reality, likens him to Hitler and argues that his repeated use of the word “I” is a sign of megalomania. Eventually, she bursts into tears, stoking the paranoia of everyone around her, until the room is barking out even wilder charges against the “satanic” government.

Despite this systematic fear mongering, the judges investigating Rabin’s murder have no interest in the societal implications of the terrorist act itself, even as they become frighteningly apparent. There’s a pointed moment when the judges are asked by a peaceful bystander why they’re grilling him about the police presence at the rally rather than asking the security forces themselves. As the interrogations continue, there’s little doubt that Rabin’s death was caused by an utter collapse in competency at all levels. Policemen weren’t given sufficient instructions, bodyguards didn’t do their job and security units had no time to prepare for the event. The man who ended up capturing the assassination on camera found the degree of disorganization to be a bad omen, and recalls being ominously instructed by an officer not to film Rabin. Thankfully, he did not comply.

Frequently horrifying and never less than absorbing, “Rabin, the Last Day” is a meticulously observant portrait of a broken society. Though the script coauthored by Gitai and Marie-Jose Sanselme could work equally well onstage, the director’s visual sensibilities make the material more cinematic than it may have seemed on the page. There are some mesmerizing tracking shots here that call to mind the final act of his under-appreciated 2007 gem, “Disengagement,” as the camera glides along the grounds occupied by a Jewish community on the West Bank before closing in on a Palestinian village perched on the nearby horizon. Yet the most unsettling footage in the film, by far, is real. One wonders what the God of Abraham, Isaac and Jacob would make of the rallies where Israeli citizens torch pictures of the Prime Minister’s face while thrusting their middle fingers into the sky, as little kids chant, “We’ll get rid of Rabin with blood and fire!” What will haunt me, above all, is the footage of Rabin himself, fearlessly facing a crowd of dissenters and preaching what he believed to be truths: that the risks he proposed are ones worth taking in order to achieve peace and that his rivals’ hypocritical notion of national unity is really just a schism in disguise. With America more divided than ever, and millions of Syrian refugees in dire need of aid, Rabin’s sobering wisdom resonates louder than any number of gunshots. 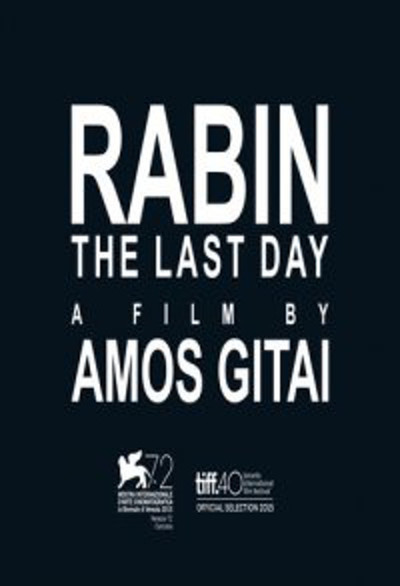 Einat Weizman as Himself

Shimon Peres as Himself