The Armor of Light

“The Armor of Light” begins with footage from a 1992 anti-abortion rally, in which one of the protest’s leaders, a minister, is seen cradling a preserved human fetus in his hands. This gentleman, the Reverend Robert Schenck, happens to be the protagonist of the documentary.

I’ll put my cards on the table, for what it’s worth. I’m what some would call “pro-choice” and I am neither moved nor engaged by tactics such as the one used by Reverend Schenck. Regardless, one supposes that the footage does establish what some would call Schenck’s “pro-life” credentials, and once the movie has done so, Schenck narrates an event that would change his life: the 1998 murder, or assassination if you please, of Dr. Bernard Slepian, an abortion provider who was killed by an anti-abortion activist. “I was more than shocked, I was stunned,” Schenck says, going on to say that he just couldn’t believe that anyone “pro-life” would actually take a life. “I was naïve,” he concludes. Gee, you think? Regardless of where one stands on the issue, it seems relatively clear that the rhetoric used by those from Schenck’s camp is frequently on the heated-to-the-point-of-inflammatory side. There’s not much hate-the-sin-love-the-sinner going on in this debate.

In any event, Schenck was genuinely moved, because he took a hard, detailed look at the gun culture within the wide-ranging evangelical community in the United States, and decided to … well, to question it. Schenck, as this documentary from co-directors Abigail Disney and Kathleen Hughes demonstrates, is not exactly an anti-gun crusader. Rather, he seeks to imbue a spirit of mindfulness to his flock. To just think about the potential contradictions within deeming oneself both “pro-life” and “pro-gun.” For merely suggesting such a thing, he gets a lot of pushback.

Intersecting Schenck’s story is that of Lucia McBeth, a flight attendant whose son was shot to death by Michael Dunn after a service-station conflict over music coming from the vehicle in which victim Jordan Davis sat. Davis was African-American, Dunn white. Dunn invoked Florida’s “stand your ground” laws, which had recently served George Zimmerman so well, to justify his actions.

So yes: this movie pokes its camera eye into about a dozen distinct forms of controversy. And yet “The Armor of Light” is a calm, measured, and very visually attractive film (each and every shot that’s not from archival or found footage is meticulously composed and executed; Disney & Hughes do NOT do “B-roll”), one that holds conclusions at arm’s length.

While drawing compelling portraits of Schenck, McBeth, and McBeth’s family lawyer John Phillips, the movie also provides some peculiar glimpses into the aforementioned gun culture. Archival footage shows NRA head Wayne LaPierre proclaiming, “The only way to stop a bad guy with a gun is with a good guy with a gun.” Later in the film, at a quiet meeting with fellow evangelicals (which opens with a prayer, even), an Operation Rescue member earnestly parrots those exact words to Schenck. It’s like something out of “They Live,” or Orwell. The same fellow also utters the catchphrase “An armed society is a polite society,” and goes on to explain that two people who meet on the street who both know that the other is armed are not going to shoot each other, which begs the question of why they were going to shoot each other in the first place. In other scenes, several church-going folk discuss a fantasy scenario in which a child molester is luring a kid into a van but is stopped by a gun-toting parishioner. When has this ever happened, really? There’s a tendency among some folks to try and bolster LaPierre’s position by sending skeptics a blog post from Controversial Times, or some other highly reliable website, about the dozen or so times that a good guy with a gun HAS stopped a bad guy with a gun. I don’t know what the actuarial tables make of this, given that the number of times this hasn’t happened is well over a dozen but … oh, good grief.

Disney and Hughes' film, for all its evenhandedness of tone, is clearly in Schenck and particularly McBath’s corner; it regards the conviction of Dunn as a triumph for common sense and justice. For all that, the film’s calmness, and its roundabout approach to narrative—somewhat unavoidable given the structure Disney & Hughes choose, which is to tell a lot of the story more or less as it happens rather than in retrospect—diffuse some of its power. The overwhelming and slightly dispiriting (for this viewer, at least) note that “The Armor Of Light” ends on is that the road ahead for Schenck is a long one, and the folks he wants to persuade along that road are not easily swayed from their reflexive disdain of a “nanny state.” 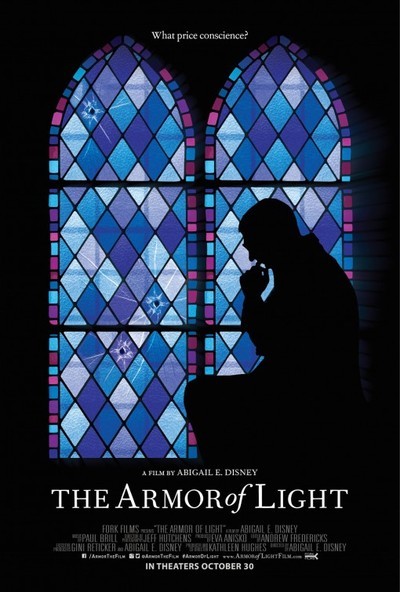