Half a dozen veteran performers do their best to elevate a patchy script in "Queen Bees," a gentle romantic comedy set in a retirement community that one character describes as "'Mean Girls' with Medic- Alert bracelets." Longtime sitcom and sitcom-like movie director Michael Lembeck ("Friends," "The Santa Clause 3: The Escape Clause") keeps it light, though sometimes that translates to superficial. Think "Mean Golden Girls."

Ellen Burstyn stars as Helen, a widow who is very attached to her devoted grandson Peter (Matthew Barnes). He visits her for tea every Thursday in the home she built with her late husband. Helen is very attached to the house as well, and is barely speaking to her daughter Laura (Elizabeth Mitchell), Peter's mother, and a realtor who has suggested she sell the house and move into a nearby retirement community called Pine Grove. Helen keeps the house in meticulous condition but can be a bit forgetful. That leads to a kitchen fire, and Helen has to move out while the house is being repaired. The only option is Pine Grove, and she grudgingly agrees to move there for just one month.

She is not sure which she finds more objectionable, all of the "Welcome to Pine Grove" greetings when she arrives ("I'm only staying for a month," she snaps), or the clique-y derision of the bossy AARP mean girls who tell Helen she has to leave "their" table in the dining room and will not admit her to the bridge club. The leader is the acerbic bully Janet (Jane Curtin), who allows a select trio to be in the "cool" group as long as they follow her rules. They include Sally (Loretta Devine), a brighter version of "Golden Girls'" sweet-natured Rose, and Margot (Ann-Margret), a sweet-natured version of "Golden Girls'" man-hungry Blanche. Margot is always on the lookout for Mr. Right #6, or at least Mr. Right Now. At the moment, she has her eye on Arthur (Christopher Lloyd), who is very popular with the ladies despite a toupee described as looking like a muskrat died on his head.

Helen does not take Janet's insults seriously, reminding everyone she is only going to be there for a month. But when a fourth member of the group dies and Sally wants to bring in Helen as a bridge partner, Helen cannot resist the chance to play a game she knows she plays well, or the opportunity to challenge Janet's dominance. This is not a movie about clever one-ups-womanship, though. The second half is more interested in Helen's developing romance with a debonair new arrival named Dan (James Caan).

It's a pleasure to see pros like Burstyn create layered, appealing characters out of thinly written, predictable material. Her scenes with Barnes have an easy natural rapport as they trade favorite quotes, citing an amusing range of sources from Nelson Mandela and coach Lou Holtz to Miley Cyrus. It helps that she looks like a million bucks in a series of soigné gowns courtesy of costume designer Cynthia Flynt, amplifying Helen's confidence and impeccable style.

Devine's semi-improvised discussion of her very impressive and not entirely natural hair is a delight in a scene where she and Helen share a joint. And Ann-Margret speaks of her five husbands with such relish ("And the last two were rich!") that we can understand how someone would want to be number six. There is some snap in the dialogue, too. Laura describes her mother to Pine Gardens' manager (French Stewart, reuniting with his "Third Rock" co-star Curtin): "She burns most of her calories rolling her eyes."

As all movies about this stage of life must, among obvious jokes about aches, pains, and Viagra—apparently it is okay to sexually objectify someone if you're old—"Queen Bees" touches gently and sympathetically on the inescapable challenges of aging, loss of loved ones, loss of independence, cancer, strokes, and dementia. Helen speaks ruefully about "what passes for okay at this age." But the movie's lesson is that it's our connections, strengthening old ones and making new ones, that make what passes for okay pretty good. 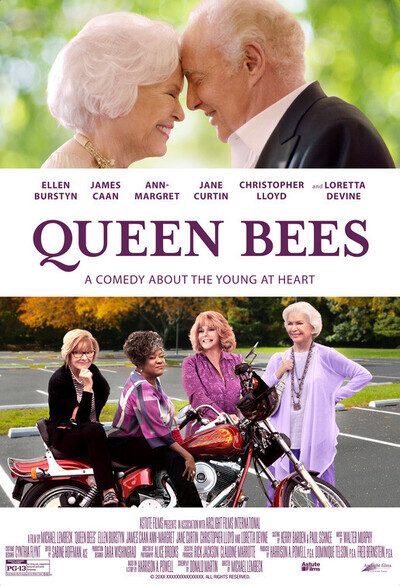