Maybe there are many other inhabitable planets out there, and in a different reality not too far off from our own, we’re exploring them. After the space race of the ‘60s, we took off to other lands in ships before the invention of digital interfaces, traversing them in bulky, brown suits that kind of look like scuba diving outfits. Maybe “Prospect,” which is full of rusted out control panels and has a space ship interior that looks like the inside of a Winnebago, takes place in 1996, but just in another dimension.

But as much as the story is assuredly a sci-fi vision, it’s grounded by its recognizable Western elements. There are constants in this daydreaming: These characters in “Prospect” are undoubtedly human, and they have the full capacity to kill each other when treasure comes between them. Even though it takes place in a different planet, it’s a throwback about buried treasure, comprised of slick villains, strange intentions, and a lot of negotiations. Guns are usually a lazy device for sci-fi movies, but here they look like lacrosse sticks, and wield the power of a pistol in a sweaty John Huston movie. This is a tale of negotiations, regarding the captive always trying to reason with the one who has their finger on the trigger.

The title “Prospect” indeed refers to prospecting, relating to this movie’s practice of finding of a golden fossil within a gloopy white alien, that can be pulled out from the ground. Writer/directors Christopher Caldwell and Zeek Earl thrust you into this story to let you figure this out on your own, as we see a father (Jay Duplass’ Damon) and his daughter Cee (Sophie Thatcher) prepare for their trip by leaving an impressive, unassuming floating dock, land on a marshy planet that kind of looks like Louisiana and go through the meticulous process (cutting a hole in the ground, pulling out the white creature, cutting it precisely before it melts on itself, etc.) The words that the two speak, not just related to locations, sometimes sound like gibberish, just like the text that she writes as she looks out the window in the movie’s casual open sequence of their working class space ship life. The only thing that the movie asks for during all of this is trust, which it earns by quickly proving how full its vision is.

A run-in with two other, more violent prospectors on the planet changes the story's dynamic, in a way that I won’t spoil, and suddenly it’s Cee and the very suspicious Ezra (Pedro Pascal) on a planet that they need to both survive on, entering into a shifting game of power often involving around weapons. As they face the other people revealed to be on the planet, the tale becomes a story of compromises, making deals with each other to not pull the trigger, or to help them get to a gold mine known as the Queen’s Lair. Plotting is nonetheless not a very tight aspect with this story, and it can cause the enterprise to lose its momentum. But it’s rare to see a sci-fi movie that genuinely has a true grit to it, a characteristic that bolsters its screenplay through its more underwhelming passages.

The most archetypal feature in this story might be Pascal, and his performance as Ezra. If this movie were to be in the films that originally inspired it, he’d have a gold tooth, a torn up hat, or at least an unruly mustache. Your whole impression of his character changes throughout the story, and it’s a testament to the cockiness that Ezra can sometimes exude, or the true pain he later faces, that he can inspire that. He enters the story as a side character, as someone you don’t trust, and while he continues to be conniving, your sympathy evolves for him in a way that’s no less than surprising.

It’s unfortunate, then, that there feels to be too big a vacancy with its true lead character, Cee, who is given a lot of life by Thatcher (clear moments of skepticism, later rhymed with vigilance). But despite the stakes constantly put upon her in the story, Cee’s lack of a strong arc frustratingly personifies the do-or-die loose plotting of the story; she too often feels like one of the more mechanical aspects to this often dialogue-driven exploration tale.

And yet the world that Cee and Ezra are navigating has a hypnotic effect—“Prospect” is the rare gem that constantly makes you wonder how they made a certain outfit or an offhand gizmo, while often maintaining the indie intimacy of a two-hander shot in the woods. It’s a stunning example of world building through toying with the stuff that has more texture than CGI: production design, costuming, and even language. The script may not resonate as much as its incredible visual experience, but “Prospect” nonetheless exemplifies the immersive potential of flesh and blood practical filmmaking, in whatever galaxy a story is taking place. 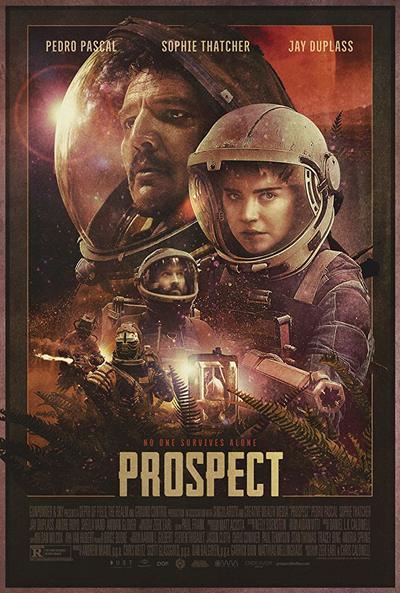