“Project Almanac” might appear to be the perfect cautionary tale for Generation Selfie, which too often seems to feel they are entitled to get whatever they want, whenever they want it and at whatever cost. But the sci-fi flick does a much more convincing job as a reminder that the time has come to finally tell the found-footage genre to get lost. Just pick up your unsteady handheld camera and go already.

When “The Blair Witch Project” entered our consciousness in 1999, the nausea-inducing horror film didn’t just shaky-cam its way into the primordial ooze of our psyches. It was also a screw-you to bloated studio fare as it embraced minimalist filmmaking and took it to new cost-conscious levels. It also taught Hollywood how to tap into the web and early social media in order to create a word-of-mouth sensation (much of it concerning debate over whether the events shown were real) before hardly anyone had seen a single frame.

From there, the concept evolved. The "Paranormal Activity” franchise that began in 2007 cleverly brought faux-amateur cinema out of the woods and into our very homes with the rare and mostly welcome use of mostly stationary cameras. It also took marketing to a new level by allowing internet users to “demand” where early screenings of the movie should be held.

In 2008, “Cloverfield” injected a super-secret giant monster storyline. In 2012, “Chronicle” added the sci-fi element of telekinesis. That same year, “Project X” went the “Superbad” route with a teen-party-gone-wild backdrop.

The result? Dramamine sales surged and a booming box-office gross was enjoyed by all.

But what was once new and trendy now seems extremely "been there, shook that," especially when an action schlockmeister like Michael Bay gets his producing mitts on the format. The major innovation in “Project Almanac” is to toss a homemade time machine into the mix that allows a gang of teen nerds to manipulate the past and improve their social status, their grades, their wardrobe, their wheels and their love life. The idea of going back and killing Hitler is briefly mentioned as an option. But it loses out to the ever-popular winning the lottery by knowing the jackpot numbers ahead of time.

The saving grace can be found in the movie’s casting. Cute Jonny Weston (“Taken 3” and the upcoming “Insurgent”) is David, a clean-cut brain whose sole outward sign of geekiness is his Harry Potter-like wire-rim glasses. After being accepted to MIT and wanting to boost his chances at a big scholarship by conducting an experiment, he and his kid sister (Ginny Gardner) poke around his late scientist father’s documents in the attic and find a vintage camcorder. Inside is a recording of his 7th birthday party–the day that his dad died in a car accident 10 years ago. Taking a closer look, he is shocked to spot his blurred current-day image in a background mirror.

That sends him and his two best buddies, almost-as-bright shy guy Adam (Allen Evangelista) and lumpy loser Quinn (Sam Lerner, who earns his keep with a priceless “Argo” reference), into the basement where they discover directions to building a time machine and the materials to do so hidden under the floor. How convenient. Soon, they are preparing for takeoff—but not before the prettiest girl in school (Sofia Black-D’Elia), who just happens to have a crush on an unaware David, stumbles into their adventures. The giddy bunch is fun enough to hang with and the effects are kind of cool—until the plot fatally nosedives into trumped-up melodrama that it doesn’t quite earn.

“Project Almanac” is directed by first-timer Dean Israelite, but Bay manages to put his signature touch on it in several scenes: namely how the camcorder used to record all the comings-and-goings to the recent past and back regularly zooms in on the nubile bodies of adolescent girls. Female behinds, breasts, legs and crotch areas get a good workout, even though David’s sister—whose own tank top is distractingly low—is doing much of the camera work. A whole montage segment is devoted to mostly young women in skimpy damp attire enjoying a water slide.

I am no whiz at the laws of temporal relocation and have no idea how it is possible to capture every moment of their travels on film when it seems occasionally that no one is actually holding a recording device. In fact, I don’t even know why “Project Almanac” had to be shot in this distracting way. So let’s talk about logic. You would think that anyone who has seen “Bill & Ted’s Excellent Adventure,”  the “Terminator” series or even “Looper”—all name-checked by our high-school heroes—would know that messing with already-happened occurrences could possibly cause a wave of unwanted repercussions a la the butterfly effect.

But it doesn’t take too long before David, who might be smart but apparently not smart enough, goes full-tilt mad scientist, loses what charm he oozed previously and throws caution to the wind for a rather selfish if sexist reason. One that could have been easily cleared up just by honestly speaking his mind in the present.

It’s enough to make H.G. Wells roll his eyes as he rolls in his grave. 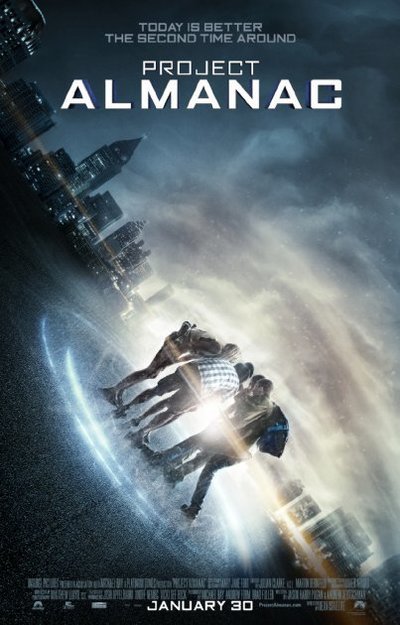