It has all the trappings of a tasteful period piece: the true-story origins, the tweedy collegiate setting, the to-die-for costumes. But beneath all that, “Professor Marston and the Wonder Women” aims to shake you up, make you think and maybe even squirm a little.

Make that a lot. This movie is sexy as hell, featuring several scenes of steamy three-ways and kinky S&M games. Luke Evans as the title character and Rebecca Hall and Bella Heathcote as the two great loves of his life have ridiculous, combustible chemistry in and out of the bedroom (as well as the many other locations, public and private, where they dared to explore their shared love at a time when the rest of the world definitely wasn’t ready for it).

But “Professor Marston” also couldn’t be more relevant, and not just because it happens to be hitting theaters just four months after the release of the smash-hit blockbuster “Wonder Woman.” It’s a timely affirmation of feminine power—of the ways in which female wisdom and strength can charge hearts and minds, influence culture and inspire others to be their most authentic selves. That was certainly true of this summer’s origin story, with its deeply moving lead performance from Gal Gadot, and it’s true again here in the origin story behind that origin story.

It takes a little while for the beloved superhero to come into full blossom, but her iconography is there, emerging steadily in illuminating, amusing ways. Unfortunately, though, writer/director Angela Robinson relies on a back-and-forth narrative structure—which has been used in so many biopics, it’s become a cliché—to tell the tale of how the comic book heroine and her alter ego, Diana Prince, came into being.

At the film’s start in the mid-1940s, Evans’ William Marston—who created Wonder Woman under the pseudonym Charles Moulton—is being interrogated about the character’s scandalous, sadomasochistic imagery by the head of the Child Study Association of America, the uptight Josette Frank (Connie Britton). Flashbacks to 1928, when he was a Harvard psychology professor working alongside his brilliant wife, Elizabeth (Hall), shed light on the source of this aesthetic.

Where Marston was all charm and charisma and good looks, Elizabeth was sharp-witted and no-nonsense. The energy between the two crackles long before they begin sharing their lab—and, eventually, their bed—with Olive Byrne (Heathcote), a Radcliffe student who initially enters their lives as a research assistant. The couple can’t deny their joint attraction for the bright, beautiful blonde—and she, in turn, falls for them both, which she’s forced to admit in an exquisitely tense scene involving an early version of a lie detector. (The Marstons are crediting with coming up with the device.)

Their sexual frolicking leads to dress-up and bondage when Marston brings his two loves to the backroom of a costume shop for a secret rope-play course—and the corset, boots and ropes they employ might look a little familiar. (Cinematographer Bryce Fortner’s dramatic use of silhouette lighting during this scene adds to its warm, intimate power—and, yes, its wonder.)

Early on, though, we had a hint that this might be a shared turn-on when the couple spies on Olive paddling a sorority pledge during a hazing ritual—supposedly as research for their theories on dominance and submission. And conversely, we can tell from the way Heathcote’s big, blue eyes widen even more that Olive is enjoying being watched. It’s scenes like these that reveal how deftly Robinson builds suspense and how seamlessly she introduces the psychology that inspired Wonder Woman.

But then she makes the mistake of undermining that tension and insight by hopping back and forth in time, often at predicable moments. And “Professor Marston” can be painfully on-the-nose in making its points, such as the use of Nina Simone’s sultry “Feeling Good” during the first time the three explore their pent-up desires. I mean, of course they are. It’s obvious.

The performances from the three leads always keep the film compelling, though—especially from Hall and Heathcote, two actresses with extremely different screen presences who nonetheless challenge and complement each other perfectly. “Professor Marston” works well as an elucidating slice of pop-culture history you might not have known before, but it’s even more impactful as a timeless celebration of strong women supporting each other. 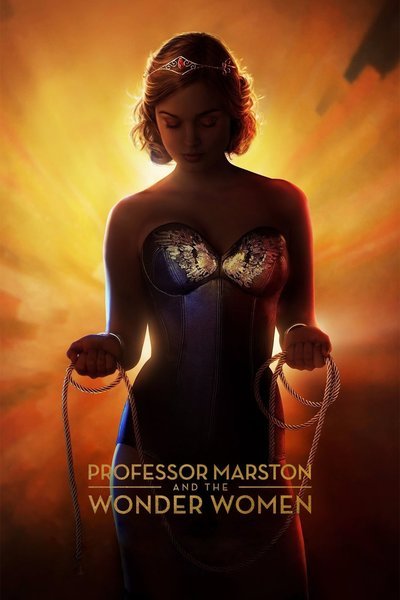