This is a surprisingly old-fashioned disaster movie. In point of fact its old-fashioned-ness is really the only surprising thing about this eye-popping 3D spectacle, directed by Paul W.S. Anderson, an adept handler of eye-popping 3D spectacle, as anyone familiar with the "Resident Evil" franchise will tell you, and in some areas of film fandom, tell you over and over again.

The destroyed-by-volcanic-eruption-in-ancient-times city of Pompeii is as old and venerated a cinematic subject as Frankenstein’s monster and train robberies. Working from a script by Janet Scott Batchler and Lee Batchler and others (the never-realized Pompeii project that Roman Polanski abandoned a few years back was to be from a Robert Harris novel), Anderson offers up a narrative device older still, a  rich-girl/poor-boy variant that finds doe-eyed tycoon’s daughter Cassia (Emily Browning) falling hard for a Britannia-imported slave gladiator known for a while only as “The Celt,” but later revealed to possess the mighty name of Milo (Kit Harington, so ripped and buff as to make any ordinary man’s resolve to get to the gym more melt into a puddle of futility). Milo’s a bit of a horse whisperer, which helps him get closer to the young lady, who often seems in the vicinity of equine complaints. His more immediate problem is an upcoming arena battle with a noble, promised-to-be-freed fighter named Atticus. While Cassia’s more immediate problem is the Roman Senator Corvus, come to bargain with her father, and determined to make a wife out of Cassia who, in the words of Jean Hagen in "Singin' in the Rain," “caint staaaaaand him.”

Anyway, wouldn’t you know it, but Corvus was also in charge of the Roman battalion that slaughtered Milo’s family many many years ago. That’s the way things work in ancient cities about to get slathered in volcanic ash in movies. Kiefer Sutherland has a hell of a time playing the relentlessly villainous Corvus—you need really strong passions if you’re going to stick to your petty personal grudges even as fireballs are battering all those around you, so it stands to reason. Why Sutherland chose to filter his villainy through Boris Karloff impersonation is anyone’s guess—it’s not as if the kids are gonna get it—but what the heck, I was entertained.

Somewhat less entertaining is the fake-knowingness of the cliché dialogue, as when a piggish slave-buyer complains “You dragged me out of perfectly acceptable brothel for this,” ar ar ar. As much  bloodletting as happens in this movie—and there’s quite a bit of it before the volcano action (presaged by a lot of building foundational cracks and such) gets underway—the movie is otherwise relentless in its wholesomeness. There’s more real depravity on the screen and in the soul of Cecil B. De Mille’s 1932 "The Sign of the Cross" than there is here. However, the action scenes are choice, and once the clouds of ash and shooting fire and churning seas start up, "Pompeii" achieves a momentum that most sensationalist studio fare can’t touch. By the end of the movie one senses that Anderson and company were going for a little bit more, particularly in the, you know, profundity department. But the civilians sitting a row ahead of me just giggled at the movie’s final shot, because, well I guess you’ve heard the saying “I wouldn’t be caught dead like that.” Tough crowd! 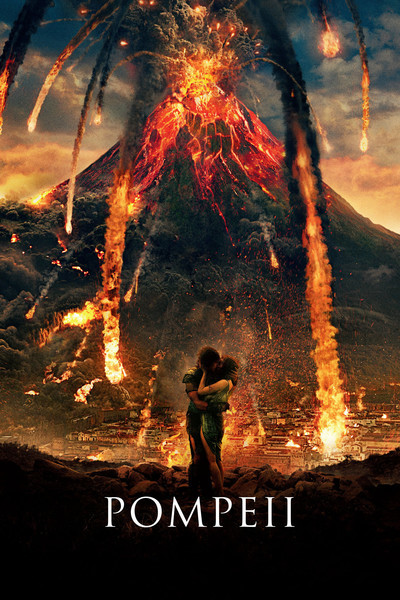