Rarely has a remake felt more contractually obligated than the 2015 version of “Poltergeist.” There are a few decent performances, a nice riff on the technology fears that drove the original movie, and a centerpiece of horror that works, but never once do you get the feeling that the people behind this remake are here because of artistic passion or creative drive. They’re here because, well, somebody had to be here, so why not them? With remakes of “Nightmare on Elm Street,” “Friday the 13th,” “Evil Dead,” and more already on the books, “Poltergeist” is even arguably a bit late to the party. And they didn’t bring a gift.

The Bowen family has fallen on hard times. Eric (Sam Rockwell) has lost his job at John Deere, forcing them to move to a new home, one which his teenage daughter Kendra (Saxon Sharbino) openly mocks. Mother Amy (Rosemarie DeWitt) has raised a beautiful family, but may have to go back to a day job to make ends meet. Son Griffin (Kyle Catlett) is going through that fearful time of childhood when we hear noises in our closets and wonder what’s under the bed. Finally, Madison (Kennedi Clements) is a unique little girl, the kind who talks to her imaginary friends a bit too often.

Before the Bowens have even unpacked, weird things are afoot in their new abode. Griffin hears sounds in his attic bedroom, and finds a box full of creepy clown toys. He also really doesn’t like the look of the old tree nearly scratching his skylight. One night, while Eric and Amy are out to dinner, all Hell quite literally breaks loose. In a pretty effective centerpiece, all three children are attacked separately. Hands popping out of the floor, trees crashing through windows, and those damn clowns—it’s a solid sequence that ends with Madison being taken to the other side. As she fights for survival between worlds, the Bowens have to call in paranormal experts (including Jared Harris and Jane Adams) to save their little girl.

Tobe Hooper’s “Poltergeist” had two thematic foundations that have been essentially transferred intact to Gil Kenan’s version. It was no mere coincidence that little Carol Ann was sucked into her TV as fears that the idiot box would forever destroy the next generation were pretty common in the early ‘80s. In the update, technology is everywhere, and even integrated into the narrative in scenes like the one where Kendra hears something strange through the static on her smartphone and the later use of drone technology. The fear of technology isn’t quite developed adequately here (nothing is), but I liked how David Lindsay-Abaire captured the modern world in which we are surrounded by electrical toys—the ominous shots of the power lines behind their house are not accidental.

Even more importantly, “Poltergeist” in both forms has a solid answer for the common question that plagues haunted house movies: Why don’t they just leave? By the time the Bowens figure out what’s going on, one of them is missing, and they’re forced to band together to save her. In many ways, especially in the original, it’s about a broken family uniting in common cause to save one of their own. That element is strong here thanks in no small part to believable husband-wife chemistry between Rockwell and DeWitt and solid kid performances, especially Catlett.

The problem is that neither of these elements feel fresh or new. Nothing about “Poltergeist” feels fresh or new. And while the mere joy of seeing actors like Rockwell and DeWitt do their thing works for a little while, it can’t sustain as the horror narrative intensifies and a few things get decidedly goofy to maintain the PG-13 rating. By the last act, I really didn’t care what happened to the Bowens or those brought in to save them. The stakes don’t feel nearly as high here and the thematic undercurrents of the first act have disappeared as the actors and filmmakers go through their motions. Harris is having fun as a reality TV star ghost hunter but he can’t fix the screenwriting flaws of a project that inevitably feels like it's just racing to the end, and not in a way that produces any sort of tension.

Maybe we’re a more cynical audience and the films that have copied the original “Poltergeist” over the years have lessened the impact of the original blueprint so slavishly followed here. If that’s the case, Kenan and his team needed to find another reason to update it. Or any reason at all really.

One Final Note: Rarely has 3D been less essential or felt like more of a cash grab. See it in 2D if you choose to see it at all. 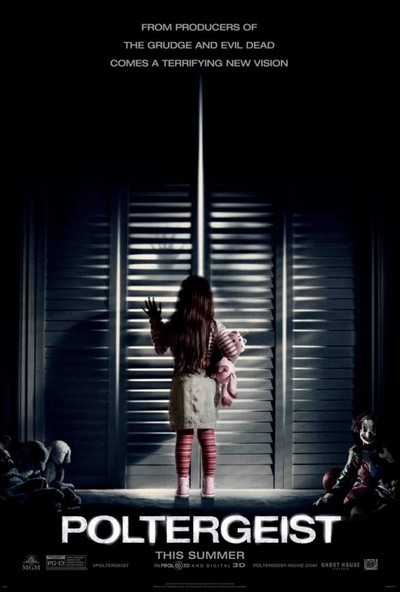