Actor, movie star, and director Russell Crowe is not a billionaire, but he’s likely been in closer proximity to billionaires than most of us. One figures that kind of exposure might have informed his performance here as a tech billionaire—who gives his profession as “gambler” to a would-be portrait painter—arranging an eccentric sendoff for himself in “Poker Face.”

It’s not one of Crowe’s most virtuosic performances, but it does have a comfortable, lived-in feel, despite the considerable anxiety his character, Jake Foley, is feeling. Or may be feeling. He doesn’t entirely let on, which is the point of the title. The movie begins with Crowe’s character in his early teens, bicycling with best buddy Drew, to the local swimming hole. The local AUSTRALIAN swimming hole, I might add. You know, one that’s off the lip of a cliff, and has a waterfall attached. At any rate, it is there that young Jake and his young buddies learn how to play and how to win at cards, in a sequence that bristles with tension at first but then dissipates into a “isn’t it great to be young and heedless” celebration to the tune of Indoor Garden Party’s “Fight Another Day.”

Eventually we’re let in on the source of the current day Foley’s fortune: surveillance software that grew out of computer gaming programs that Jake worked out with his pals. We also learn that Jake’s getting ready to check out, because he pays a visit to a guy named Shaman Bill (Down Under cinema stalwart Jack Thompson) who talks mortality with Jake and trips him out with a truth serum of sorts, which will come into play later. After exchanges with his second wife (the first one died in a car accident, as the truth-serum montage showed) and teen daughter, Jake helicopters to his kitted-out and rare-art-filled house to offer three of his old friends a choice: take a million-dollar car or risk five million in chips on a poker match. Only it's not a conventional poker match. One of the friends is a liar on too-intimate terms with a member of Jake’s family. The other is a blackmail victim who’s setting Jake up. The one played by Liam Hemsworth (who’s like 26 years younger than Crowe, which makes childhood bestie status a bit improbable, but who’s counting) is a suicidal addict. And Jake’s got just the medicine to make these guys face up to reality.

Except the aforementioned setup is also in play—a trio of armed robbers is on its way to the house to abscond with some of that art. Foley and pals, accompanied by a trusty assistant and eventually by Drew, now played by RZA—sans an Australian accent, but again who’s counting—wind up in the house’s panic room. Armed only with an automatic pistol with one bullet in it (long story). So they determine to wait out the more heavily armed baddies.

But oops, then the second wife and the teen daughter show up. Attention must be paid, action must be taken. Written by Crowe and Stephen M. Coates, "Poker Face" wants to be an awful lot of different things over the course of a commendably short running time. (It’s an hour and thirty-nine minutes, but the credits start at more like an hour-twenty-eight.) The contemplation of mortality drama, the revenge puzzle, the captivity thriller—they all get a whirl here. And it’s all topped off with the Unified Theory of the Good or At Least Redeemable Billionaire. Even if you can sense the fun Crowe is having with the camera setups in certain scenes, "Poker Face" is simultaneously a lot and not all that much. 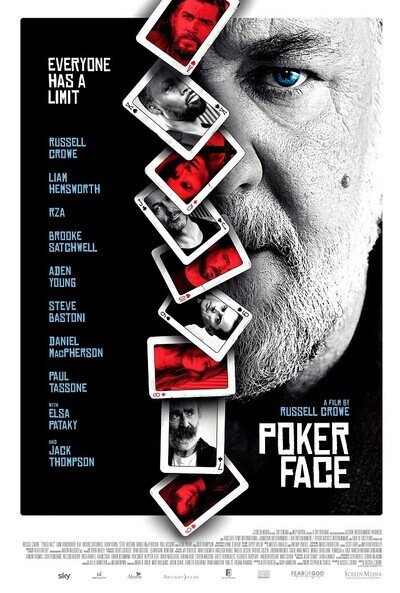