Since making its debut in the summer of 1991, the action film "Point Break" has developed a cult following that I continue to be at a loss at fully explaining. After all, the film in which callow FBI agent Johnny Utah (Keanu Reeves) infiltrated a group of bank-robbing surfers led by the enigmatic and Zen-spouting Bodhi (Patrick Swayze) in order to bring them down—was an aggressively stupid film back then and time has not exactly done it any favors. To be fair, it was dumb but it certainly wasn't boring and director Kathryn Bigelow (who would go on to make such great films as "Strange Days" and "The Hurt Locker") handled the action sequences in such a visually arresting manner (especially in an extraordinary mid-film chase scene through a residential neighborhood that is still stunning to watch) that there were times when you could almost convince yourself to forget that the rest of the film was a preposterous mess. 25 years later, we have now been blessed with a "Point Break" remake that is completely lacking in any of the visceral thrills or apparent charisma of the original and which could not be duller if it tried.

Once again, our hero is Johnny Utah (Luke Bracey), an extreme sports enthusiast who suffered a great tragedy—one that plays more like a spoof of the opening of "Cliffhanger" than anything else—that inspires him to quit the sport and become an F.B.I. agent. For his first case, he is assigned to investigate a pair of strange heists in Mumbai and Mexico in which massive American conglomerates are robbed by people whose heists are accompanied by wild stunts (such as motorcycling off of the upper floors of skyscrapers and parachuting to safety—don't ask about what happens to the bikes themselves) and who appear to distribute their ill-gotten gains to the poor. Putting two and two together and coming up with "Dude," Utah figures out that the perpetrators are fellow extreme athletes whose trail of crime parallels the infamous Ozaki Eight—a collection of eight extreme (needless to say, the word "extreme" is used a lot here) challenges spanning the globe devised by environmental activist Ozaki Ono to honor the beauty and power of Mother Nature while still looking like a refugee from an old Mountain Dew commercial. Considering that Ono himself supposedly died during the third challenge, you can tell how impressed Mother Nature is by this.

Utah's brilliant plan is to infiltrate the gang and figure out where they are heading next—most of his superiors think his idea is silly but since he already has the necessary hair, his boss (Delroy Lindo) lets him pursue it. Utah catches up with his suspects off the coast of southern France just in time for the surfing portion, where he immediately whiffs it and nearly drowns. He is rescued by Bodhi (Edgar Ramirez) and luckily for him, his savior turns out to be the leader of a group that is attempting to do the Ozaki Eight while simultaneously pulling off elaborate robberies as a way of giving back to the planet while also helping them to fund their around-the-world journey. While Utah's contact (Ray Winstone) frets that he is getting too close to his target, Utah accompanies Bodhi and the gang as they base jump, fly through canyons in wingsuits and snowboard down the face of a mountainhe also gets to indulge in another form of extreme athletics with token hottie Samsara (Teresa Palmer) but I don't think that this activity counts towards the Eight. Of course, it is all fun and games until Bodhi & Co. blow up a gold mine and Utah, finally reminded that he has a job to do, pursues Bodhi to Venezuela to stop him before he can complete the Eight and disappear forever.

The original "Point Blank" may have been a spectacularly stupid movie but at least it was straightforward and direct. Here, Kurt Wimmer's screenplay meanders all over the place and is so concerned with allowing Bodhi to spout his kooky koans about becoming one with nature through the Ozaki Eight that it neglects to adequately explain what the challenges are or what they are supposed to represent. As for the action scenes themselves, they are little more than an over-edited assemblage of random bits of footage that only rarely give viewers any idea of what is going on—not only do they fail to live up to the impossibly high set-piece standards set by "Mad Max: Fury Road," they even fail to live up to the visceral thrills provided by "Carol." There are times, in fact, where it seems as if there is some kind of serious disconnect between director Ericson Core and his cinematographer as to how to present the action—this is all the weirder because Core served as his own cinematographer.

As for the bizarre bonding between the pursuer and pursued that fueled the original, this remake has a complete lack of chemistry between the stars. As Utah, Bracey fails to approximate the gravitas of early 90s Keanu Reeves—he always looks and sounds as if he should be starring in one of those awful "Epic Movie"-like spoofs of a big action film instead of an actual one. Edgar Ramirez, on the other hand, can act (as you can discover for yourself right now in the wonderful "Joy"), but the character is so blandly written that you cannot understand how he could convince people to accompany him on a late night Burger King run, let alone a crime-riddled around-the-world spiritual journey. Delroy Lindo and Ray Winstone can, of course, act, but shuffle through their roles practically wearing signs saying "I Did It For The Money!" The most embarrassing part, however, goes to Teresa Palmer as The Girl—in a year that has given us such badass action heroines played by Charlize Theron and Daisy Ridley, her role is little more than a reminder of how far Hollywood still has to go in terms of gender politics in action cinema.

The idea of remaking "Point Break" was not necessarily a bad idea, I suppose, but whatever charms that film might have had, they are utterly lost on the people behind this embarrassment. Instead, their game plan appears to have been to take a familiar title, throw in a bunch of random action sequences that seem more interested in aping the lunacies of the "Fast & Furious" franchise than Bigelow's visual poetry and toss it out into a crowded marketplace without any advance screenings (hence the lateness of this review) in the hopes of attracting viewers who couldn't get into "The Force Awakens." The original film, you might recall, was released with the tag line "100% Pure Adrenaline!" This version misses that mark by about 97.5%. 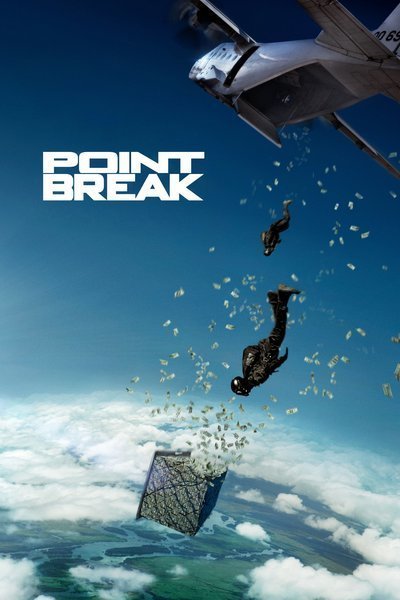