STD tests, W-9s, photo IDs, hand sanitizer, douches, on-set safety protocols, and pre-shoot interviews—all the things that make porn a real job—are depicted in clinical detail in “Pleasure,” artistic descendants of the basket of sauce packets on top of a brothel fridge in Lizzie Borden’s “Working Girls.” Like Borden, Thyberg is interested in exploring the construction of turn-ons, not actually turning the audience on: The most explicit moments in this film don’t involve specific sex acts, but the unglamorous realities of preparation and cleanup. There’s far more male nudity than female, all of it shockingly casual. And when it comes time for the main event, Thyberg either cuts away or films from Bella’s visceral, sometimes violent first-person point of view.

“Pleasure” is Kappel’s first movie role, adding an additional layer of realism to a narrative about reckless innocence and cynical determination. The film lives in a liminal space between fiction and documentary, following Bella as she shoots scenes for different porn sites and bonds with the other women living in her “model house.” Bella is a made-up character, but the companies and the people she works with are real. In fact, the majority of performers in the film—including Revika Reustle in her Indie Spirit-nominated role as Bella’s roommate/BFF Joy—come from the adult industry. As a result, the line between Bella’s journey and Kappel’s experience making the film can be quite thin indeed.

One of the film’s real-life porn directors, Aiden Starr, gives Bella the transcendent, affirming, sex-positive experience she came to L.A. to find. The rest of them range from sleazy but harmless to manipulative and predatory, culminating in a disturbing scene where Bella’s consent is repeatedly violated on a “rough sex” shoot. Kappel’s performance in these moments is courageous: It takes bravery for any actor to throw themselves into an edgy and physically demanding role like this one, let alone an unseasoned one like Kappel. Her willingness to push through the fear shows not only her commitment to her craft, but also the unconditional trust between Thyberg and her star.

“Pleasure” doesn’t try to justify Bella’s choices, and it doesn’t blame them on a traumatic past or daddy issues. She comes from a stable family, and she’s only stuck in L.A. because she lied to her parents about an “internship” in California. As a character, her motivations are simple, but inscrutable: She isn’t particularly driven by money, and while she likes attention, she could take or leave the fame. Her drive is to simply be the best, a very American mindset that ultimately eludes this very European film.

“Pleasure” is full of such textured observations about misogyny. Women who side with the men in charge are rewarded, although the prize is dubious: If you prove yourself suitably pliant, you get to sit silently in VIP next to some slovenly dork with a head shaped like a thumb. Nevertheless, “not like the other girls” is an aspirational refrain repeated by men and women alike, a ploy to keep the “girls” from uniting against exploitation. And although Bella makes compromises throughout the film, the ones that affect her the most involve her rivalry with another woman, glamorous rising star Ava (Evelyn Claire).

Despite Thyberg’s efforts at remaining impassive, the most suggestive unspoken statements in “Pleasure” come from its miserablist European arthouse style. The portentous opera music and bold editing do make for an interesting contrast with the film's trashy milieu of pink lip gloss, trucker hats, and empty takeout containers. But by presenting this story with stylistic flourishes associated with grim, depressing movies, “Pleasure” passes judgment through form on what the filmmaker is so assiduously trying not to say in content.

Thyberg keeps her cards close throughout “Pleasure,” using the film’s verité framing to obscure the extent of her involvement as a director. The film feels even-handed, in the sense that its fly-on-the-wall style lets situations speak for themselves. But it’s not clear if Thyberg was guiding different scenarios in different directions, or if she simply told her actors to just do what they normally do on set and recorded the result. Some of the adult industry figures featured in the film have condemned “Pleasure,” with one director claiming he was “duped” into participating. Others have defended it, claiming that “Pleasure” is an honest look at an industry that has its problems like any other. Is it possible to make an unbiased movie about porn? “Pleasure” isn’t saying. 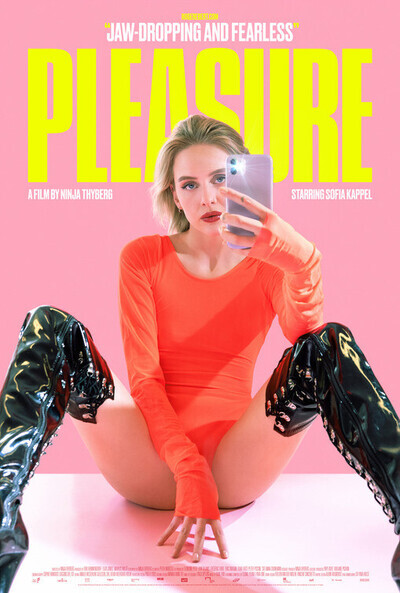