At the risk of over-stating the obvious: every movie deserves to be judged based on what it seems to be (based on the evidence that the movie presents). Granted, any filmmaker's goals can be dismissed if a moviegoer finds those goals to be, uh, worthless. But generally speaking: we shouldn't try to judge a film based on our expectations, but rather what we're looking at. By this logic: "Piercing," the latest horror film by music video helmer turned feature horror writer/director Nicolas Pesce, is more frustrating than it is actually bad. Because "Piercing," an adaptation of Ryu Murakami's novel of the same name, succeeds as a darkly comic provocation. I think. Sort of?

Over the course of 82 minutes, Pesce—aided significantly by lead actors Christopher Abbott and Mia Wasikowska—hints at, but never thoughtfully suggests two lonely protagonists' psychological hang-ups through their semi-ritualized, sadomasochistic courtship. Abbott, as nervous wannabe sadist Reed, seems to want to hurt Wasikowska's Jackie, an apparently submissive prostitute. But appearances are deceiving, and often in predictable ways. Still: isn't being coyly unpleasant what "Piercing" is all about? Does it matter if the plot is obvious? How do you engage with, let alone judge, a film like this?

I can tell you what "Piercing" looked like to me: Reed invites Jackie to a luxury hotel. He rehearses, through a pseudo-comically pantomime, what he wants to do to Jackie: choke her, stab her, and dispose of her body. Jackie arrives, and almost immediately complicates matters by calling her pimp, just to re-assure him that she arrived safely at her client's hotel room. You might then think that Reed, who obviously notices Jackie's call, would change his plans. But Reed does not have time to do that, mostly because Jackie interrupts him again, this time by repeatedly stabbing her right thigh with a sharp pair of scissors.

Reed and Jackie's interactions almost always devolve into this kind of superficial, expectations-defying shock tactics. He nervously prepares to move on her, she does something unexpected, he loses his balance, and she responds with more off-putting kindness. Then he regains his confidence, and this dull cycle begins from the top. Reed and Jackie's actions are, in that sense, not only annoying because they're un-revealing, but because they're un-revealing on purpose. I watched Reed and Jackie go back and forth, and heard dozens of retro prog rock song cues from Italian gialli and American softcore films of the 1970s (music from films like "Tenebre," "The Red Queen Kills Seven Times," and "Camille 2000"). And I waited to find out a little more information about these two characters. Bit by bit, I learned what they basically want from each other. But I never got so much information that I cared about what happened next to Reed or Jackie.

Still: what's "Piercing" about? The score provides some clues, as does a visually ornate opening credit sequence, which features footage of detailed model skyscrapers and apartment buildings. Here, Pesce seems to announce that his adaptation is a work of meta-fiction since, from the opening scene, it announces to viewers that it does not take place in a completely realistic-looking world. Maybe "Piercing" is about how we process simulated violence, or a screwed-up sexual/romantic relationship that we, as (ostensibly) voyeuristic outsiders, can never really understand.

With that said: I also never really understood why Pesce made "Piercing," and not just in the literal sense of that leading statement. Abbott and Waskowska both do fine jobs with their respective roles, but those roles are rather thin. Their characters don't talk much, but when they do, they don't say much, like when she rambles on about bicycling equipment or instant soup mix. So when I saw "Piercing," I felt like I was granted a knowingly superficial look at at two fictional characters' clashing personalities and obsessions. But what exactly does that clash mean? I got only a vague notion of who these characters are, though I guess that's the film's point. I was also nettled by how little I understood, though I guess that that's also the film's point. Still: I wanted to know more about these volatile, well-dressed characters, but, well, you get the idea.

I think the key to enjoying "Piercing" comes from enjoying Reed and Jackie's constantly shifting power dynamic: either now she's on top, and then she's on the bottom, or, now he's on the bottom, and then he's on top. Maybe that type of relationship is supposed to remind me of my own relationships and/or the ones I've seen in other movies (my thoughts immediately went to "Audition" and "Phantom Thread"). Or maybe "Piercing" is an unsuccessful provocation, and I didn't get anything out of it beyond a few wispy ideas about how we may never really understand what we want from each other. I wish I could honestly say that thinking about "Piercing" is more fun than watching "Piercing," but I think I like this movie even less now than I did before. 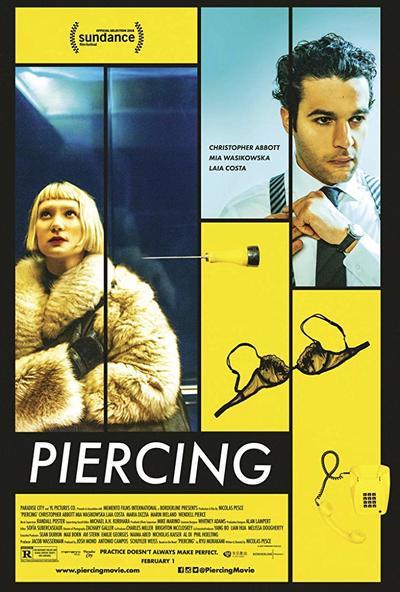