Robert Towne's “Personal Best” tells the story of two women who are competitors for pentathlete berths on the 1980 U.S. Olympics team--the team that did not go to Moscow. The women are attracted to one another almost at first sight, and what begins as a tentative exploration develops into a love relationship. Then the romance gets mixed up with the ferocity of top-level sports competition.

What distinguishes “Personal Best” is that it creates specific characters--flesh-and-blood people with interesting personalities, people I cared about. “Personal Best” also seems knowledgeable about its two subjects, which are the weather of these women's hearts, and the world of Olympic sports competition.

It is a movie containing the spontaneity of life. It's about living, breathing, changeable people and because their relationships seems to be so deeply felt, so important to them, we're fascinated by what may happen next. The movie stars Mariel Hemingway and Patrice Donnelly as the two women track stars, Scott Glenn as their coach, and Kenny Moore as the Olympic swimmer who falls in love with Hemingway late in the film. These four people are so right for the roles it's almost scary; it makes us sense the difference between performances that are technically excellent and other performances, like these, that may sometimes be technically rough but always find the correct emotional note.

Mariel Hemingway plays a young, naive natural athlete. We sense that she always has been under the coaching thumb of her father, a perfectionist, and that her physical excellence has been won at the cost of emotional maturity. She knows everything about working out, and next to nothing about her heart, her sexuality, her own identity. She loses an important race at a preliminary meet, is sharply handled by the father, gets sick to her stomach, is obviously emotionally distraught.

Patrice Donnelly, as a more experienced athlete, tries to comfort the younger girl. In a dormitory room that night, they talk. Donnelly shares whatever wisdom she has about training and running and winning. They smoke a joint. They kid around. They arm wrestle. At this point, watching the film, I had an interesting experience. I did not already know that the characters in the film were homosexual, but I found myself thinking that the scene was so erotically charged that, "if Hollywood could be honest," it would develop into a love scene. Just then, it did! "This is scary," Donnelly says, and then she kisses Hemingway, who returns the kiss. “Personal Best” is not simply about their romance, however, it is about any relationship in which the trust necessary for love is made to compete with the total egotism necessary for championship sports. Can two people love each other, and at the same time compete for the same berth on an Olympic team? Scott Glenn, the coach, doesn't think so. He accepts the fact of his two stars' homosexuality, but what bothers him is a suspicion that Donnelly may be using emotional blackmail to undercut Hemingway's performance.

This is a very physical movie, one of the healthiest and sweatiest celebrations of physical exertion I can remember. There is a lot of nudity in the film--not only erotic nudity, although there is some of that, but also locker room and steam room nudity, and messing around nudity that has an unashamed, kidding freshness to it. One scene that shocks some viewers occurs between Mariel Hemingway and Kenny Moore, when he gets up to go to the bathroom and she decides to follow along; the scene is typical of the kind of unforced, natural spontaneity in the whole film. The characters in “Personal Best” seem to be free to have real feelings. It is filled with the uncertainties, risks, cares, and rewards of real life, and it considers its characters' hearts and minds, and sees their sexuality as an expression of their true feelings for each other. 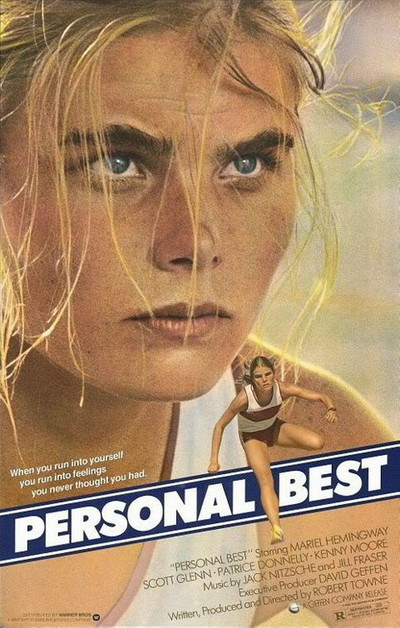