Christopher Walken's greatest trick is playing regular guys. There has never been anyone remotely like this charismatic, eerie actor—a man whose preparation for roles includes retyping all of his own dialogue without punctuation—so you might expect that when he forgoes flagrant eccentricity and settles into "normal" parts, like the father in "Catch Me if You Can," he'd disappear and become dull. But somehow the magnetism remains even when he's playing the calm center of the storm, and ceding colorful supporting player energy to his fellow actors.

"Percy vs. Goliath" gives Walken a stoic, reactive, salt-of-the-earth part drawn from reality: a Manitoba farmer who goes to court against international agriculture Monsanto. He's playing a simple man here: Percy Schmeiser, a canola farmer who learned the trade from his father and grandfather. Based on events that occurred in 1998, the film follows Percy as he faces accusations that he stole proprietary seeds from Monsanto and grew them during two seasons on his farm. The company wants the farmer to pay a fee for use of the seeds he didn’t realize were theirs, which got merged unknowingly with his own crop, and which he saved samples of for subsequent growing seasons.

In the ensuing court case, Percy argued that this portion of the crop was grown from seeds that appeared incidentally on his land, most likely by way of a neighbor's property (there's a brief explanation of how leaky seed bags in the back of a pickup truck could've accounted for the discrepancy). Monsanto refused to back down, demanding over $150,000 from Schmeiser as compensation for using their seed, which was designed in a lab to survive doses of a potent, Monsanto-manufactured weed killer. Plus reimbursement for legal fees. Imagine having that kind of nerve.

Directed by actor-filmmaker Clark Johnson (of "Homicide: Life on the Street" and "The Wire") from a screenplay by Garfield Lindsay Miller and Hilary Pryor, "Percy vs. Goliath" follows the model of underdog-against-the system legal thrillers like "Erin Brockovich" and "Dark Waters," pairing Schmeiser with an idealistic younger lawyer, Jackson Weaver (Zach Braff), and an agricultural activist, Rebecca Salcau (Christina Ricci), and having him face down a formidable array of adversaries, led by Martin Donovan's polite but ruthless Monsanto lawyer Rick Aarons.

There are, it appears, notable differences between the actual case and what appears onscreen. For one thing, Percy Schmeiser is depicted as a humble country farmer here, practically a John Ford or John Steinbeck character eking out a precarious living, when in reality he took over his family-owned farm, gas station, and farm equipment dealership in 1954, and 12 years before Monsanto came rumbling through town had purchased a second farm equipment dealership in Humboldt, Saskatchewan. But the economic power of Monsanto is so overwhelming that these and other changes seem inconsequential: this is indeed a David vs. Goliath story, and Monsanto's case seems so unreasonable and usurious on its face (the "technology fee" charged to farmers who accidentally end up with some of their seed in furrows feels like an elaborate scam) that it's impossible to see them as anything but bullies in need of a takedown.

Walken plays against sentiment here, wisely so. And while there are a few choices that undercut the movie's sensible aesthetic (including a score that's too folksy-adorable for the gravity of the situation) Johnson and his collaborators (including cinematographer Luc Montpellier, who oversaw the widescreen, epic Western-style compositions) acquit themselves honorably, for the most part. Of particular interest are Percy and Jackson's prickly relationship with Rebecca, who begins to seem as if she's more interested in using Percy for fundraising than materially helping him win the case; and Percy's union with his wife Louise (Roberta Maxwell), which walks a fine line between introducing reasonable notes of audience doubt and creating a “spoiler” character who seems as if she might stand in the way of a crowd-pleasing triumph (there's social collateral damage in town, Louise suffers the brunt of it).

Frustratingly poised on the knife's-edge of "pretty good but not as good as you want it to be," the movie might've benefitted from a more leisurely but focused pace that would've allowed the characters to breathe more, and the legal and scientific concepts to be explained with greater clarity. The editing, credited to three people, is sometimes choppy and scattershot, kneecapping the momentum of scenes that the actors are nailing. But the outstanding cast, handsome visuals, and unimpeachable little guy-against-the-system dramatics carry the film across the finish line. 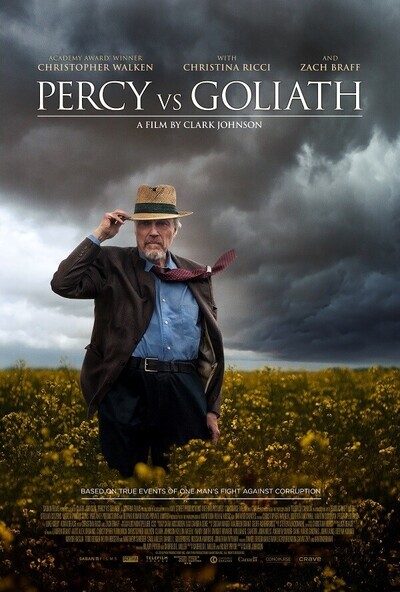 Rated PG-13 for some thematic elements.