More horror remakes should be as thoughtful as "Patrick: Evil Awakens," an atypically clever riff on the 1978 Australian thriller "Patrick."

It's hard to say whether anyone unfamiliar with the original will enjoy "Patrick: Evil Awakens." It is, in some ways, more charming than Franklin's original film, but apart from Pino Donaggio's winning score some smart plotting, it serves mostly to remind fans that horror remakes needn't be soulless cash-ins.

Director Mark Hartley highlighted the original "Patrick" in his documentary "Not Quite Hollywood: The Wild, Untold Story of Ozploitation." Like many of the films Hartley championed in his earlier, list-shaped film, the 1978 "Patrick" is rough around the edges. After a spectacularly unnerving opening sequence, it founders, though it remains mostly charming in its way. "Patrick: Evil Awakens" is a sleeker redo. It's essentially the same film as "Patrick," but this time, the characters' actions are a little less arbitrary. Hartley and first-time screenwriter Justin King take the raw material and tighten it up. With a wonderfully creepy score by regular Brian De Palma collaborator Donaggio, the movie gets a lot of mileage out of pokey source material.

In the new film, Nurse Kathy Jacquard (Sharni Vinson) becomes fascinated with coma victim (Jackson Gallagher). But while Kathy's weirdly drawn to Patrick, she can only get so close to him. He's the pet project of sadistic know-it-all Doctor Roget ("Game of Thrones"'s Charles Dance), and the charge of mysteriously over-protective Matron Cassidy ("Six Feet Under"'s Rachel Griffiths). Soon, Kathy discovers that Patrick not only knows what's being done to him, but is also a psychic and has a mad crush on her. Predictably, nobody believes Kathy's outlandish claims, even after Patrick invades her privacy (he's looking at her Facebook photos!) and hurts her friends and loved ones.

The fact that nobody believes Kathy at first makes sense beyond expected generic reasons. This is mostly thanks to King's clever script, which re-arranges and beefs up lines from the original "Patrick." For example, King explains Roget's cruel motives more smoothly than Everett De Roche did in his original 1978 screenplay. In King's version, Roget's callousness initially seems to stem from his familiarity with Patrick. How could Kathy, a relatively inexperienced nurse, notice things he hasn't picked up during years of study?

But eventually, Roget loses his patience with Kathy, and reveals more about himself. Dance's Roget isn't just a patronizing scientist, but a zealot, and a sadist. He administers shock therapy to Patrick with an antiquated device he says he won at a carnival, and insists that a higher calling motivates him. This latter point is especially interesting since, in the original, Roget is using Patrick to find out what happens at the point of death, but doesn't seem interested in what Kathy identifies as Patrick's "soul." So while knowing a little more about Roget may not add much to his character, it does add something.

Then again, much of Roget's dialogue is nipped and tucked from the original "Patrick." This is "Patrick: Evil Awakens"' greatest failing: it isn't much better than an appreciably fussy remake. King and Hartley are clearly big fans of the source, but that lack of distance means they sometimes retread old material for its own sake, as when Kathy remarks that Patrick has only gotten more fit during his hospitalization. (Gallagher's a good looking kid, but his scrawny, murderous antagonist isn't "Tiger Beat" material.)

Hartley's direction is also often unnecessarily over-determined. Because he wants you to know that he's a big De Palma fan, Roget's hospital has crazy mood-lighting (i.e. very low wattage), a looming statue of the Virgin Mary in the hallway, and a "Jacob's Ladder"-worthy room wardful of coma victims. Richard Franklin, the Hitchcock-obsessed director of "Road Games" and "Psycho 2," did more with less in the original "Patrick," even if his micro-budget film looks mangy by comparison.

Still, compare the way Hartley and Franklin film the scene where Kathy feels up Patrick. She breathlessly asks "Can you feel this" as she gropes Patrick's stiff but probably ecstatic body. In Franklin's version, you can't explicitly see Kathy touching Patrick in an indelicate place, and that makes the scene more exciting. Franklin's coy-ness encourages viewers to perv out and reach their own conclusions, even if it also makes the scene, er, climax prematurely. By contrast, Hartley's comes on too strong and gives everything away. The viewer's mind has nowhere left to wander. 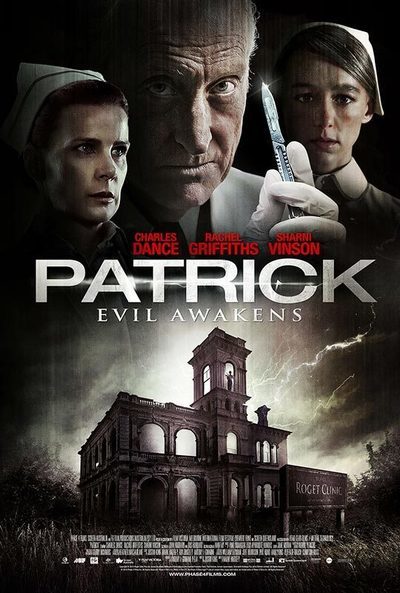