I feel as if I gained 20 pounds while vicariously indulging in the gastronomic pleasures of “Paris Can Wait.” This slight yet diverting road trip that meanders through the heart of France cares more for cheese courses and wine pairings than about what my husband likes to call “making good time.” It also finds no shame in literally stopping to smell the roses or invoking the pastoral indulgences of Manet’s “The Luncheon on the Grass” (minus the naked lady) when a car breakdown leads to a leisurely picnic.

But nothing is quite so delicious onscreen as its leading lady, Diane Lane, who manages to sweetly echo her own youthful escapades in her film debut as a 13-year-old American schoolgirl who runs off with a young streetwise French boy in 1979’s “A Little Romance.” This adult caper also recalls her memorable work in other dramas that require her to passionately swoon while in the throes of an affair, be it “A Walk on the Moon,” “Unfaithful” or “Under the Tuscan Sun.” Lane, still an incandescent knockout at 52, continues to pull off expressing sensuality and sexiness better than most actresses of any age.

Eleanor Coppola (wife of Francis, mother of Sofia), a veteran 81-year-old documentary filmmaker doing a narrative feature for the first time, follows a less titillating route than those previous Lane outings with a scenario based on a real-life encounter while she attended the Cannes Film Festival in 2009. When illness kept her from flying with her husband, his flirty French business associate volunteered to drive her to the Paris airport in a rickety Peugeot convertible—and a seven-hour journey turned into a two-and-a-half day ramble with abundant breaks along the way.

While Coppola’s experience was strictly platonic save for orgies of the culinary kind, Lane’s Anne is in a different place in her life and starved for attention as an underappreciated empty-nester wife of Michael, a bigshot Hollywood producer (Alec Baldwin, primarily heard via cell phone rather than seen). He treats her more like a personal assistant, relying on her to keep track of his socks, pills and inseam length, rather than making her own happiness a priority. Here, an earache keeps her grounded, but Michael’s colleague Jacques (Arnaud Viard) generously offers to be her chauffeur. Maybe too generously, since Anne initially is on guard when the first matter of business isn’t beating the traffic but enjoying a lunch of prosciutto and ripe melon with abundant glasses of vino. Her eyes also widen when he asks for her credit card so he can make a hotel reservation for the night.

But the rakish fellow’s main intent isn’t to try to take advantage of a pretty—and married—American lady. It’s that he is simply a French man and proud of it while living up to nearly every Gallic cliché in the book. Maurice Chevalier would approve when Jacques tells her that young women are just Pop Tarts whereas he pronounces her to be chocolate crème brulee. He can’t help but show off his expertise about what his country has to offer, even as he pulls over and smokes a cigarette every hour, surreptitiously reconnects with former lovers along the way or almost smashes into a truck while pointing out Provence’s Mont Sainte Victoire, the mountain that provides the centerpiece of many of Cezanne’s masterworks.

For much of its running time, “Paris Can Wait” is content to dawdle along like a travelogue, with pit stops to check out Roman-built aqueducts, lush fields of lavender, a museum devoted to the Lumiere brothers who are considered the inventors of cinematography, a textile exhibit, Michelin-rated eateries that serve freshly butchered baby veal and lamb along with a spontaneous apres-dinner dance. Meanwhile, detail-oriented Anne constantly snaps photos of each diversion. Michael—clearly a bit unnerved by the situation, even as he adds to his work load—stays in touch with phone calls and messages. But while Coppola intentionally underplays a revelation about a missing rose gold Rolex that Anne once gave him, it does cast a bit of a shadow over their relationship for the rest of the movie.

All is not empty calories. One doesn’t get to be an octogenarian without some wisdom to dispel and the issue of grief enters the picture. As Jacques and Anne feel more comfortable with one another, they begin to open up about their personal lives. He notices a baby’s photo in a locket around her neck while she wonders why he isn’t married. What they discover brings them closer. Most moving is a visit to an ancient cathedral in Vezelay, where Anne silently cries while lighting a candle.

“Paris Can Wait” isn’t going to make anyone forget “Two for the Road” or “It Happened One Night.” But Lane is able to suggest that this unexpected jaunt has led to a crossroads in Anne’s life as she stares directly at the camera in the final frame. She isn’t sad, she isn’t happy, she is enlightened and it is lovely to witness. As for Coppola, she has described herself thusly in interviews: “I’m this housewife who suddenly decided she’s going to write a film and actually direct it.” Such humility is unnecessary, considering it took six years to get her passion project up and running. If nothing else, this estimable woman has proven that she can keep up with the other members of her famous clan. 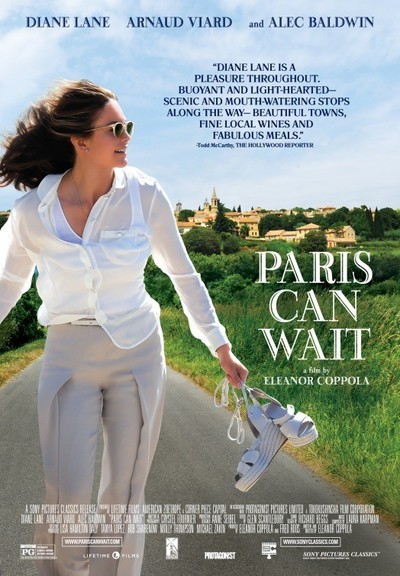 Rated PG for thematic elements, smoking and some language.