“There’s nothing the matter with you. You’re alive, and sick and living in New York -- like 8 million other people.”

These words of encouragement may not resemble a new day a-dawning, but by the time they arrive near the end of “Outrageous!” they carry a certain poignant significance. They're spoken to a frightened schizophrenic girl by her best friend in the world, who is a drag queen. And then, in what wouldn't have passed for a happy ending in Hollywood's golden age but will have to do these days, they hit the dance floor together in a gay disco.

Almost any description of “Outrageous!” makes it sound like a sensational exploitation film but that's exactly what it isn't. It's a bittersweet, endearing, sometimes funny little slice of life, and when you describe it as the story of a friendship between a transvestite and a schizophrenic, you have to add that they're loyal and human and deserve one another.

The movie was shot last winter in Toronto and New York and debuted in the marketplace of the Cannes Film Festival last May. The title and the subject matter made it sound like this year's contender for the Andy Warhol prize, but the movie itself was something else again: a low-budget, rough-edged effort, yes, but with warmth and sincerity and two very engaging performances.

The performances were by Craig Russell, who has been a professional female impersonator for five years, and Hollis McLaren, a Canadian actress who was in no fewer than four other Canadian films this year at Cannes. Because they bring convincing dimensions to their characters, the movie isn't the soap opera it could have been. It knows something about human nature.

Russell plays a Toronto hairdresser who's trying to get up the courage to support himself as a female impersonator. Miss McLaren, who's haunted by night mares of a “bonecrusher” out to destroy her, leaves a mental hospital and comes to live with him. They both have less than triumphant sex lives (she finds taxi drivers irresistible; his drag orientation turns off mainstream gays). But they care for one another.

This basic relationship is played as counterpoint to the gradual success of Russell's nightclub act, and problems during Miss McLaren’s pregnancy (the responsibility of either a Checker driver or an independent; we're not sure). And all of this material would come across as relentlessly maudlin melodrama if McLaren and Russell weren't engaging performers and if the movie didn't have a resilient sense of humor.

The humor comes mostly from Russell, who throws in one-liners, asides and exit lines and is funny (and sometimes uncannily accurate) onstage in his impressions of such as Streisand, Channing, Garland, Dietrich and Peggy Lee. There are engaging walk-ons, too -- like the gay taxi driver who turns out to be a former William Morris agent and takes over Russell's career; and Russell's friend, who determines to attend a drag ball dressed as the stewardess played by Karen Black in “Airport ‘75” (“I mean, how many Zsa Zsa Gabors can you have in a room?”).

The movie makes its points too heavily toward the end, where the girl's miscarriage is intercut with Russell's successful New York debut. But even here the performances rescue the movie; Russell's act is intrinsically entertaining enough, and Miss McLaren's despair is convincing enough, that we forgive the lack of a subtler touch in the writing and direction. I suppose the nicest thing about “Outrageous!,” finally, is that it isn't so outrageous after all.

A selection of Craig Russell clips from "Outrageous!" can be found on YouTube:

The Year of the Everlasting Storm 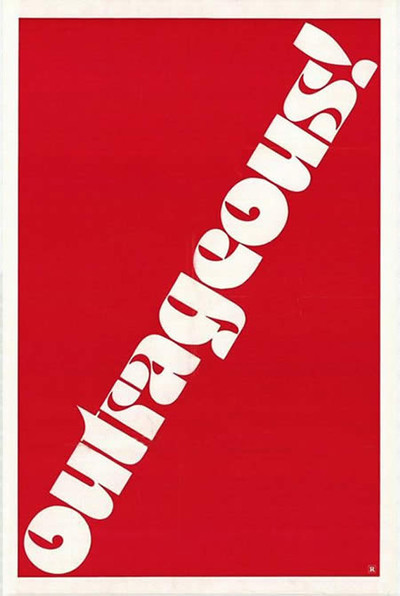