As I watched David Mackenzie’s “Outlaw King,” the opening night film of the 2018 Toronto International Film Festival now being shunted off to Netflix after a heavy edit, I often marveled at the scope of the production. So many overhead drone shots. So many detailed costume designs. So many extras in carefully choreographed battle sequences. So much time and energy put into something that, try as I might, I could only muster interest in sporadically. All of this well-meaning effort to waste on a film that never finds the right tone to connect with viewers. It takes a lot to make a movie like “Outlaw King,” even if it provides so little.

The director of “Hell or High Water” reunites with his leading man from that film, Chris Pine, to tell the story of Robert the Bruce, the notorious King of Scots who waged a war against the English Empire in the early 14th century. The film opens with a technically striking single take that makes the macho posturing and political turmoil clear. (It's arguably the best scene in the film, which is never a good thing.) At first, the Scots and the English seem to find tenuous peace, but the bloodthirsty look in the eyes of Prince Edward (Billy Howle) make clear that’s not going to last long. Before you know it, Robert the Bruce is leading what is essentially a guerilla warfare campaign against a much-stronger, much-bigger military force. In scene after scene, the Scots are outnumbered in nearly comical ways, but they refuse to surrender. It’s a classic David vs. Goliath tale, made all the more resonant by its historical significance.

Mackenzie and his four (!!!) co-writers try to humanize Robert by giving him a headstrong wife in Elizabeth de Burgh (Florence Pugh, promising at first and then tragically wasted) and even a daughter, but the historical accuracy requires their separation through the bulk of the film. We also meet several allies of Robert’s, including Angus Macdonald (Tony Curran) and James Douglas (Aaron Taylor-Johnson), who is trying to get back his family land stolen by the English. At least one of the likely several drafts of “Outlaw King” seems to be about the futility of rebellion. Someone tells Robert, “You wanted to be King, well this is the price you pay,” after he learns that his brother was killed and his wife and daughter were taken by the enemy. This is the most interesting subtext in the film: how much one has to give up to be a leader of men.

“Outlaw King” never quite commits to this interesting idea, almost resolute in its forward progression through the mud and grime from one battle scene to the next as if it's ticking off boxes on a history test. To say it all starts to blend together would be an understatement. Other than a memorable ambush in the middle of the night involving flaming arrows and the urgency of the final battle sequence, scenes start to become indistinguishable from one another. Almost as if they sense that something needs to break the monotony, Howle and Taylor-Johnson lean into the exaggerated aspects of their characters, giving performances that approach camp. Howle is the polar opposite of his reserved character from "On Chesil Beach," going all manic eyes and loud line readings while Taylor-Johnson looks so invested in the final bloody scenes that you start to worry about his mental health. Conversely, Pine was clearly advised that real leaders are more often "the strong, silent type," and falls into a flat performance that feels under-directed by Mackenzie, who was likely preoccupied with the day's battle sequence.

There are hints at the movie that could have been and why so many hundreds of people got involved with “Outlaw King” throughout. The cast is undeniably talented, as is Mackenzie, although epic scope may not be his thing (he worked better with the intimate “Hell” and “Starred Up”). And there’s something inherently attractive about the story of Robert the Bruce, someone who stood up to violence and corruption despite the overwhelming odds that he would fail. We love a good David story, especially as it so often feels like the Goliaths are winning lately. This is a tale that will almost certainly be told again, gathering hundreds of hard workers in the Scottish mud with horses and swords yet again. Let’s hope that crew returns with something better. 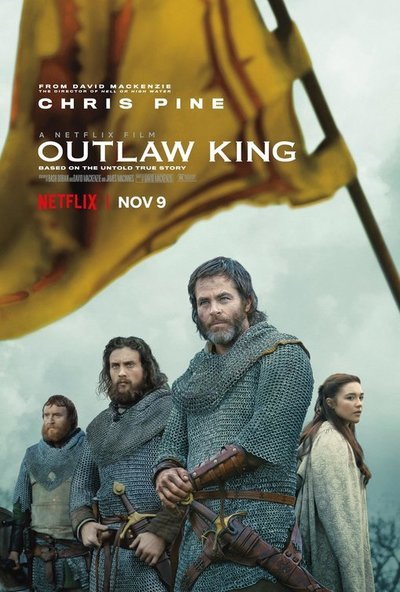 Chris Pine as Robert the Bruce