“Our Time” is the rare spiritual drama that not only feels genuinely mysterious, but also appears to have been made by people who are aware of and interested in their human characters’ flaws. Like Mexican writer/director Carlos Reygadas’s previous films, “Our Time” follows protagonists who often try and fail to tap into (or be worthy of) the incredible energy that presides over the romantic setting of Tlaxcala, a rugged, flat grassland territory in Eastern-central Mexico. Reygadas (“Silent Light,” “Battle in Heaven”) splices human drama—jealous poet/rancher Juan (Reygadas) encourages his wife Esther (editor Natalia Lopez) to have an affair with his employee and friend Phil (comedian Phil Burgers)—into beguiling, awe-inspiring panoramic landscape shots that give viewers a sense of scope and perspective that’s often lacking from other contemporary movies about faith and religion. “Our Time” is even funny sometimes, albeit in the same kind of wryly mordant and cosmically alienated way as Stanley Kubrick’s “Eyes Wide Shut.”

That, incidentally, is a big part of why “Our Time” is so extraordinary: Reygadas fosters an inclusive atmosphere where all emotional responses are valid. In his movie, Juan’s behavior reflects the self-defeating/erasing impulse to both integrate and to control one’s environment. In this context, playing God is human, but failing miserably is divine.

That sort of comically humbling rationale is unique to “Our Time,” a movie that encourages viewers to feel just as frustrated and as awed as Reygadas’s characters as they try to hold onto love’s fading light (which is often represented literally here). Juan desperately tries to give Esther the space she needs, even as he tries to be closer to her, like when he spies on her from inside a shuttered closet, or outside of an open window. The fact that these scenes are presented in real time—and with a rich, dusky color palette (lots of silver-greys and deep blacks)—says a lot more than Juan’s actions ever could.

“Our Time” is, in that sense, more about the way Reygadas suggestively comments on Juan’s story than what Juan is explicitly shown doing or saying. In one scene, Reygadas gives us a vision of a dim, greyish-white computer screen as Juan reads an apologetic note from Phil to Juan, saying that he appreciates Juan’s understanding, but can’t continue being in relationship with Esther: “I don’t want to play this game. I also don’t know how to handle this crazy crush now.” Phil’s words appear onscreen as if they’re being written as soon as they’re thought; a soft, unobtrusive violin solo (the kind you might hear at a Barnes & Noble café) can be heard as Phil’s letter appears letter by letter before our eyes, divorced from any visual representation of their author.

Juan’s comically mannered response—“Someone more manly would have said: 'It would be a pleasure to have sex with you, but I won't do it because you're Juan's wife, and I have much to thank him for. Either way, I would first consult with him’”—is presented though voiceover narration as Phil watches a white horse escape and disappear across an open field. This isn’t the world as it appears to Reygadas’s characters, but rather the world (and its inhabitants) as the stage for a half-funny, half-dire clash between hormonal impulses and intellectual control.

So while Juan frequently tries to impose his will onto whatever Reygadas’s camera shows us, Reygadas never confirms Juan’s subjective experiences for very long. Instead, Reygadas constantly makes us feel as lost and frustrated as his human subjects. For that reason, Reygadas’s sometimes inscrutable authorial whims are usually more important than Juan’s familiar narrative. I was often awed and fascinated by Reygadas’s supra-human perspective: he takes us inside a car’s wheel well, moments before the tire is splashed and completely covered in mud; then he shows us the last subtle ripples of sunlight as they disappear behind a copse of broad-limbed trees; moments later, we follow Reygadas’s camera as it aimlessly stalks around a concert hall, from a wall mosaic to the ornamental ceiling moldings, then around the orchestra pit, and back into the audience.

In these scenes, Reygadas suggests that “Our Time” isn’t just Juan’s story, but rather a (sometimes bitterly funny) reflection of humanity’s stubborn refusal to accept that we are not really the center of this world, or anybody else’s. We join Juan as he watches divine light slowly and periodically fade from view, only to realize that only he’ll eventually disappear long before it does. “Our Time” is not a traditional nor reassuring allegory, but it is a sad, wondrous reminder of our own mortality. 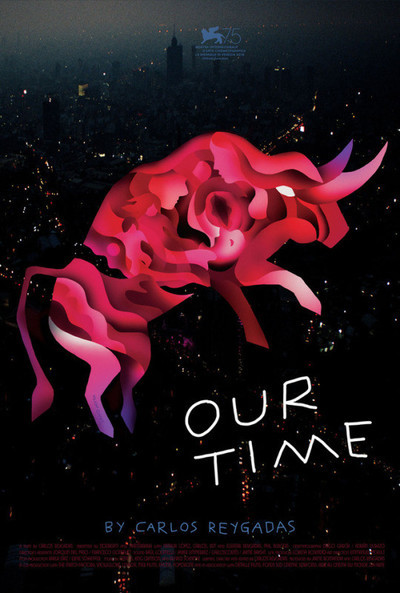