The force of evil in "Othello" has its origin, "like the origin of everything else in the tragedy, in the character of its hero," Mark Van Doren wrote. It is Othello who is guilty. Iago is able to plant his cruel seeds of jealousy only because Othello's character is so thoroughly prepared to receive them. To blame Desdemona's death on Iago is to turn Othello into a pawn, and that violates the purpose of tragedy, which is to show a hero brought down by his own flaws.

The best productions of "Othello" show Iago consumed by self-love - by a narcissistic infatuation with his own villainy. Yes, he supplies Othello with the false evidence to suspect Desdemona, but much of his performance is put on for his own entertainment. Iago is jealous not of Othello's woman but of his power, and he destroys Othello's life almost as an exercise in superiority.

Those are the human emotional engines that drive Shakespeare's play and that have made it so powerful for so many different audiences for so many years. They are at risk in any modern production, where the fact that Othello is black and Desdemona white is likely to cast a longer shadow than it did in Shakespeare's time.

Especially just at this moment of the film's 1995 release, with the fates of O. J. and Nicole Simpson projected like a scrim on top of the screen, it is difficult to free the play to do its work. To some degree, any modern production must make Iago the villain and Othello the victim, and suffer as a result.

But this production of "Othello" need not have suffered so much. Adapted and directed by Oliver Parker and starring Laurence Fishburne, Kenneth Branagh and Irene Jacob (as Othello, Iago and Desdemona), the film gives us a distant, brooding Moor who seems to have had his tragic fall almost before the play begins, and an Iago who seems more interested in seducing Roderigo, Desdemona's former suitor, than in destroying Othello. In enlisting Roderigo (Michael Maloney) to his conspiracy, Branagh as Iago sets a tone and uses body language that reads as homosexual; he seems to be in a play of his own.

That is not to say Branagh's Iago is badly done; he is the best thing in the movie. But he makes Iago curiously distant from the main line of the action. Iago is in love with conspiracy and his co-conspirators, and destroys Othello as a by-product of his obsession. And Othello, as played by Fishburne, never seems the truly happy husband and triumphant general the play initially requires, but seems even in early scenes to be somehow aware of his destiny. Later in the film, his character consumed by jealousy, Fishburne makes interesting physical choices, as when his head is so filled with images of adultery that it cannot remain still, and twists restlessly.

That leaves Irene Jacob, as Desdemona, to complete the film's catalog of characters at right angles to one another. Jacob is a wonderful actress, as anyone who remembers Krzysztof Kieslowski's "The Double Life of Veronique" or "Red" will recall. But she is appearing here in a play by Shakespeare, whose language is so crucial that the scholar Harold Bloom makes a show of preferring his Shakespeare in text readings rather than stage performances. Irene Jacob, who is Swiss, is not at home in English, and certainly not at home in Shakespeare, although she finds a heartbreaking physical gesture at the moment she is being smothered by Othello: Her hand reaches out to caress him.

Fishburne is much better, but not truly at ease, although I wonder if he might not have been more impressive if he'd been allowed the full reach and texture of Shakespeare's prose. Parker's adaptation slices and dices the original until the movie almost could have been based on the "Othello" pages from Bartlett's Familiar Quotations. With the time he saves, Parker gives us a distractingly modern soft-core sex scene and montages that summarize offstage action that the play itself is hardly concerned with. Even worse are scenes where characters talk unheard under the music on the soundtrack; no composer - no, not even Charlie Mole - can improve on Shakespeare.

Kenneth Branagh has had great success with his own films of Shakespeare ("Henry V" and "Much Ado About Nothing"). He is currently at work on a "Hamlet" that will star Robin Williams and Billy Crystal - as Rosencranz and Guildenstern, I hope, not Hamlet and Polonius. He has toured in Shakespeare and is a master of the cadence of the words, so his ease in the dialogue acts as a contrast to the others.

His readings are diabolical and fiery, but do not, as I've suggested, seem focused on Othello.

The result is a movie that will not give its viewers much of an idea of the Shakespeare play, and may inadvertently give them other ideas, about interracial love, that were not much on Shakespeare's mind. Many people seeing this film will read it as the story of a jealous black man who wins but cannot trust his white wife, and so kills her. There is a lot more to it than that. In particular, there is the way Shakespeare uses language to describe and dramatize universal human weaknesses; either the audience thinks, "There, but for the grace of God, go we," or the production has not worked. Read the play. 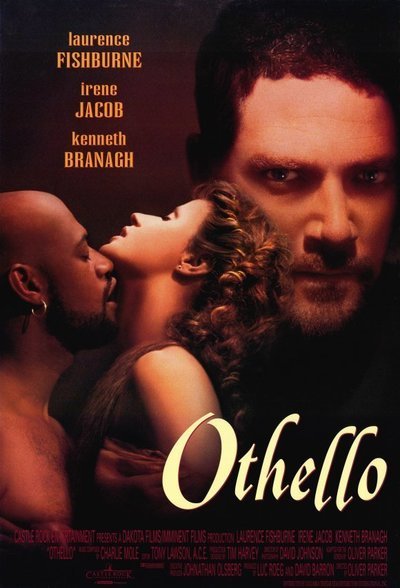