So serious it's not even funny

The first thing you may wonder about this year's Academy Award nominees for best live-action short is: Where's the Funny? Academy voters typically favor drama over comedy in the Best Picture category, and that bias prevails in the shorts category, too. Last year's winner was Terry George's somber Irish drama "The Shore," but I would've preferred the whimsical, slyly understated humor of the Norwegian nominee "Tuba Atlantic," or the more conventional Irish charms of "Pentecost," about a young altar boy who mischievously disrupts a Sunday service in his local parish.

Aside from one nominee ("Curfew") that tries to be amusing, this year's batch of five nominees emphasize what Woody Allen (in "Annie Hall") called "total heaviosity," which is to say: Don't look for laughs because they're in very short supply.

That's more of an observation than a criticism, however, because all five live-action nominees share another trait: They may be short on humor, but they compassionately illuminate the state of our world, our frailties and foibles, and our capacity to survive the challenges that life throws at our feet.

That quality of endurance shines brightly in this year's strongest nominee, the Afghanistan drama "Buzkashi Boys" (29:42), an international collaboration (director Sam French is American) and one of the first narrative films shot amidst the war-torn ruins of Kabul. It's here that we find two young boys — a streetwise orphan and the son of a stern but loving blacksmith — who both dream of playing Buzkashi, an Afghani variant of polo using a dead goat (and the source, presumably, of the phrase "he got your goat").

It's a rugged sport that would likely appeal to children of war, and despite a tragic turn of events, the film emerges as a muted celebration of tenacity and hope for better days to come. Like René Clément's 1952 classic "Forbidden Games," French's film views war and its aftermath through the eyes of children — still, and always, the most heartbreaking perspective on humanity's dark side. That the film ends with a hint of optimism is no small achievement.

Similarly, the U.S./South African coproduction "Asad" (16:28) effectively uses a cast of Somali refugees, offering a child's-eye view of what initially appears to be a no-win scenario: In a small, war-torn Somali fishing village, a young boy Asad (Haroun Mohammed — like the kids in "Buzkashi Boys" a superb nonprofessional actor) faces a high-pressure choice between the dangers of ship-raiding or, in defiance of the heavily armed village pirates, the honest life of a traditional village fisherman. It's been said that children are often wiser than the grown-ups around them; "Asad" embraces that sentiment with no-nonsense practicality.

A Belgium/France coproduction, "Death of a Shadow" (20:29) is a dark fantasy that looks and feels like a Steampunk collaboration between Terry Gilliam, David Fincher and Jean-Pierre Jeunet in "City Of Lost Children" mode. In the wake of World War I, a photographer with a strange, supernatural camera captures the shadow of dead soldier named Nathan (Matthias Schoenaerts, from "Rust and Bone"), and offers him a second life in exchange for 10,000 shadows.

Seizing the opportunity, Nathan sets out to find Sarah (Laura Verlinden), the woman he'd fallen in love with before he was killed in battle. When he discovers that she's now with another man, jealousy drives him to pursue an embittered course of action. With bizarrely imaginative production values that will appeal to fans of Guillermo del Toro, "Death of a Shadow" seems a bit muddled in terms of storytelling and overall purpose, but if director Tom Van Avermaet has steampunk feature in his future, it's guaranteed to be a visual feast of retro design.

Like the acclaimed 2001 drama "Iris" and Sarah Polley's superb 2006 feature "Away from Her," the Canadian French-language short "Henry" (21:11) conveys the confustion and terror of Alzheimer's disease, focusing on the internal turmoil of the 84-year-old title character, a former concert pianist played with heart-wrenching authenticity by Gérard Poirier.

It's mostly confined to one hospital corridor and directed with admirable finesse by popular Quebec actor Yan England, who employs fluid, almost waltz-like camera moves to visually manifest a disorienting parade (for Henry, not for the viewer) of people and emotions from Henry's past — most notably his violinist wife, Maria (Louise Laprade), whose apparent disappearance triggers Henry's innermost fears. Making fine use of Mascagni's "Cavalleria Rusticana" as a musical motif, "Henry" suggests that England, like fellow Canadian Polley, has a promising future behind the camera.

Finally, there's "Curfew" (19:43), which qualifies as a lucky nomination for American actor/writer/director Shawn Christensen. I say "lucky" because, like last year's comedic nominee "Time Freak," it's essentially a student film (albeit a well-made, well-funded, multiple-award-winning one) full of good-humored ideas that never gel into a satisfying whole. I'm guessing that most viewers will love the scene in which dozens of bowlers break into a funky dance routine in a crowded bowling alley, but for me it falls flat. The tissue-thin story concerns a carefree slacker named Richie (played by Christensen) who's recruited by his estranged sister to babysit his nine-year-old niece Sophia (Fatima Ptacek) for a few hours.

The kid is smarter, wiser, and more responsible than her aimless uncle, and that's pretty much the extent of Christensen's "comedy." Like the character he plays, "Curfew" meanders harmlessly from one barely-connected scene to another. Boil it down to its flimsy essence and "Curfew" is a mini-sitcom with lofty ambitions. 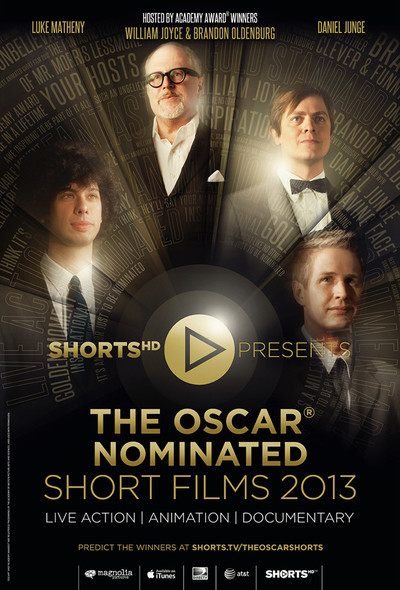