The Polish film “Operation Hyacinth” is set sometime between 1985 and 1987, when the titular secret police action was enforced. Cops were tasked with tracking down known or perceived homosexuals, entering them into a database and often forcing them to sign confessions or out other people. Blackmail and violence were common tools employed by officers and higher-ups. During the operation, over 11,000 people were registered in this database.

Knowing this information will clarify a plot point or two, but you can walk into this Netflix release blind and you won’t be lost. Director Piotr Domalewski and screenwriter Marcin Ciastoń use the operation as a backdrop for a police procedural involving a serial killer of gay men and the cop who goes undercover to solve the case. Along the way, our protagonist starts to wonder if he’s identifying too much with his temporary role as a gay man. It sounds a bit like “Cruising,” but in actuality, it hews closer to the detective movies of the '80s and the paranoid thrillers of the '70s. Cinematographer Piotr Sobociński Jr. bathes the characters and locations in a distinctly neo-noir aesthetic while the story spirals in directions that keep the viewer off-guard as to whom they can trust.

Officer Robert (Tomasz Ziętek) is a rising star in his precinct, still a bit green but coming from a respected family line of police officers, including his father, Edward (Marek Kalita). Robert is engaged to a fellow officer, Halinka (Adrianna Chlebicka), who oversees the evidence lockers. He and his partners are part of Operation Hyacinth, raiding public restrooms and clubs to round up gay men. It’s evident that no one involved in these maneuvers has much—or any—respect for homosexuals, whom they call “hyacinths” in the same way “pansy” became the flower of insult used here in America. These closeted men are then ruthlessly interrogated in claustrophobic scenes where they beg not to be exposed.

When a rash of murders occur with the same type of fatal wounds, the police think they have a serial killer on the loose. The higher-ups demand that the case be solved as soon as possible. When a suspect Robert brought in has a confession beaten out of him before subsequently killing himself in a cell, the police close the case. Robert is in line for a promotion his father is more than eager to help push through, but something doesn’t sit right with him. The resolution is too neat. Plus, there’s no evidence, incriminating or otherwise. “We got a confession,” says one officer, but considering how badly the suspect was beaten, it cannot be a reliable one.

With a little bit of leeway, Robert is allowed to go undercover to satisfy his own suspicions. Posing as a guy on the prowl, he encounters Arek (Hubert Milkowski), a confident and bold young man who complains about the Hyacinth raids and has a preternatural knack for avoiding capture. Considering that he knew some of the victims, Robert decides to use him as an informant. Arek turns out to be a good choice for information, but he’s a flirtatious sort who sees his new friend as rather repressed. “You can’t be afraid of everything,” he tells Robert, “especially not freedom.” To loosen him up, or perhaps just to test the waters of availability, Arek kisses an unprepared Robert. It’s barely a peck, but it has larger repercussions.

“Operation Hyacinth” deals with Robert’s latent homosexual desires in ways that are familiar, but the film also uses them to add an extra layer of tension to the already taut police procedural. There’s a terrifying scene with a suspicious, angry Edward, who suspects his son may not be straight. Danger is closer at home and work than on the street, especially when the evidence in the murder case casts a wider, more sinister and conspiratorial net. There are some powerful men with powerful secrets, and as Robert gets closer to the truth, he becomes increasingly endangered and obsessed. Zietek does a very good job with both the action scenes and the difficult moments of emotional and sexual confusion, and Milkowski provides a liberated and loose counterpoint for him to play against.

Had this been made back in the 1940s, it would have fit nicely in the same genre as “Detour” or “The Maltese Falcon.” It has a streak of hopeless nihilism that’s characteristic of the finest noir. Ciastoń’s script, which won the Polish Film Festival’s Best Screenplay award, weaves a compelling and complex web of anger, suspense, and romance while simultaneously indicting the Hyacinth system and its participants. It has a lot to say about the harsh costs of repression brought about by societal homophobia. As a result, the film’s resolution is far from tidy or closed, yet it still manages to satisfy. 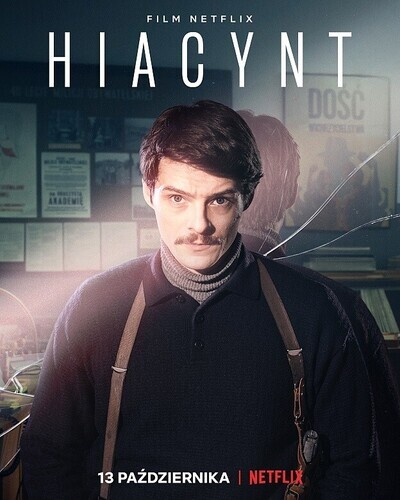