Sure, Oscar Isaac is a great actor, but is he Good For The Jews?  The Guatemala-born performer is in this film asked to play a hero not just to Israel and the Jewish people but to civilization itself: Peter Malkin, the Mossad agent who apprehended the Nazi war criminal Adolph Eichmann in 1961, in Argentina, where Eichmann was hiding under an assumed name.

“Operation Finale,” directed by Chris Weitz from a script by Matthew Orton, begins with Isaac’s Malkin in Austria, in 1954, conducting a raid on the home of a suspected Nazi; the fellow, who’s gunned down trying to escape, WAS a Nazi (we see him hiding some swastika-embossed books before getting the door), just not their Nazi. Quite a mistake to make, and in this case on Christmas.

That’s not the only thing haunting this character; the movie is punctuated by flashbacks in which a young woman is initially menaced by German soldiers in a forest. Who this woman is, who she was to Malkin, and what finally happened to her are all revealed as the flashbacks progress.

But before catching up with Malkin in a new home in Israel later in the ‘50s, the movie cuts to Argentina, and a movie house that’s showing Douglas Sirk’s classic “Imitation of Life.” Haley Lu Richardson’s Sylvia watches, rapt, the searing scene in which Troy Donahue’s Frankie denounces Susan Kohner’s Sarah Jane, an African-American woman passing for white. Behind Sylvia a handsome boy named Klaus giggles. She shushes him, but thinks she’s cute. Later, when they’ve dated a bit themselves, Weitz will restage the “Imitation of Life” scene itself. This is pretty clever on a number of levels, since Klaus turns out to be an anti-Semite and neo-Nazi, as filled with race hatred as Frankie. And then there’s the fact that Susan Kohner is Weitz’s mother. (Who at 81 is still alive to appreciate the homage.)

Klaus’ dad is Eichmann, the architect of the Holocaust, who’s masquerading as an uncle. Sylvia’s father tips off a Mossad man (an action that will yield unpleasant consequences for father and daughter). In Israel, a plot is hatched, but not before a debate: assassinate Eichmann, or purloin him and bring him to Israel to stand trial. Malkin, still haunted by his botching of the depicted capture, is of two minds about it. But he’s eager to serve, and while his superiors consider him hot-headed and impetuous, he’s got the zeal and strategic stuff to get the project going.

As you’ve likely inferred from this plot description, “Operation Finale” partakes in a lot of commonplaces, from the trope of the Maverick Team Leader on down. It does so with a little wit. When asked why he never gets the plum assignments at his Mossad posts, Malkin drolly responds, “I don’t know. Antisemitism?” And Isaac really goes full Clooney in these early scenes, toggling between easy charm and melancholy soulfulness. Comic actor Nick Kroll plays his associate, and Melanie Laurent is an anesthesiologist (and ex-girlfriend of Malkin’s) who’s upset about her own previously botched case. As they get the band together, the movie takes on a heist-picture flavor: call it “Ben-Gurion’s 11.” (Simon Russell Beale has a gratifying cameo as the then-Prime Minister.)

Ben Kingsley plays Eichmann, and you begin to understand not just why Isaac is in the picture but why he’s also got a producer credit: once the gang has Eichmann under wraps and is forced to keep him in a safe house for an extended period waiting for the aircraft to fly him out, it’s Acting Duel Time. The Mossad agents need a signed form from Eichmann. The war criminal, implacable, refuses to put pen in hand. So Malkin works on him. A scene in which Isaac’s character shaves Kingsley’s character with a straight razor is not unimpressive, although the movie never reaches “Marathon Man” heights.

As their conflict heightens, so too do the World War II flashbacks, which include scenes of mass executions, stark contradictions to Eichmann’s protestations that he was a bureaucrat who was just following orders. The filmmaker Claude Lanzmann, the philosopher Theodor Adorno, and the critic Gilbert Adair have all argued, in different ways, that the depiction of Holocaust atrocities, particularly the simulated depiction of them, is something like secular blasphemy and should be not done. But this attempted taboo has been violated so frequently, and often so heedlessly, that it seems quixotic to even bring it up. I do so because I was disquieted by it, and have to go on the record as saying that.

In several other respects, though, “Operation Finale,” despite its other elaborations on the historical record, is engrossing and a little moving. And Isaac is a very winning and effective messenger of Peter Malkin’s heroism and humanity. 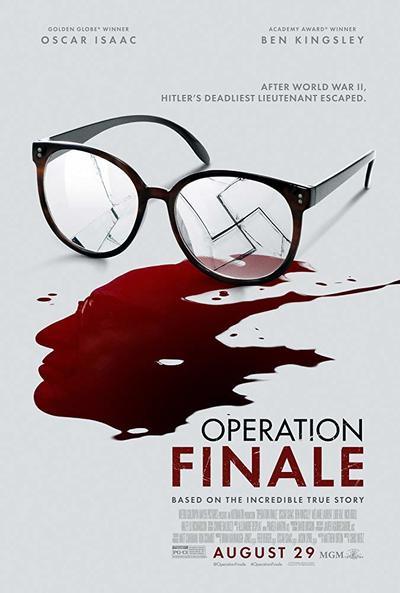 Rated PG-13 for disturbing thematic content and related violent images, and for some language.