You’d have to be totally cynical, with a heart of stone and ice water in your veins, not to be even the slightest bit charmed by “One Chance.”

Yes, it is pure formula–shamelessly feel-good in its sentimentality, even. It’s based on the true story of unlikely opera singer Paul Potts, the schlubby car phone salesman who won the first season of “Britain’s Got Talent” with his powerful rendition of the Puccini aria “Nessun Dorma.” The YouTube clip of the shy, portly Potts walking on stage for his audition, opening his snaggletoothed mouth and blowing the judges away with his enormous tenor voice–including the notoriously hard-to-impress Simon Cowell–has more than 128 million views. Similar to the superstardom of fellow contestant Susan Boyle, Potts’ allure lies in the gaping disparity between his appearance and his ability.

But even if you’d never heard the man’s name prior to entering the theater, you’ll know exactly where this movie is headed at the end. It’s a familiar British comedy along the lines of “The Full Monty,” “Billy Elliot” and “Little Voice” with its working-class setting, eccentric supporting characters, dryly self-deprecating humor and ultimately uplifting conclusion.

This workmanlike underdog tale from director David Frankel (operating more in “Marley & Me” mode than “The Devil Wears Prada”) is winning nonetheless, mostly thanks to an irresistible lead performance from James Corden. You may have seen Corden in his scene-stealing supporting turn as Keira Knightley’s busker buddy in “Begin Again,” or perhaps you’ve heard recently that Corden will be taking over for Craig Ferguson as host of “The Late Late Show” on CBS. “One Chance” is a great showcase for his likable persona; with his understated, guileless presence, he makes potentially maudlin material go down easy.

Not that this is a spoiler, mind you; the script from Justin Zackman (whose previous work includes last year’s broadly wacky “The Big Wedding”) spells things out early and often. “As long as I can remember, I’ve wanted to sing,” Corden-as-Potts says in voiceover at the film’s start. “I mean, really sing.”

As a kid, Potts was bullied routinely in his Welsh small town for his awkwardness and his sophisticated musical tastes. (There’s a running bit about the fact that his name sounds similar to that of former Cambodian dictator Pol Pot.) As an adult living at home with his parents–the sweetly supportive Julie Walters and the gruffly disapproving Colm Meaney–he still gets bullied by the same dudes. His one friend is his boss at Carphone Warehouse: the odd-looking and thoroughly inappropriate Braddon (Mackenzie Crook).

But it’s through Braddon’s prodding that Potts summons the courage to pursue a romance with a woman he’d been flirting with online: Julz (the immensely appealing Alexandra Roach), a shy but clearly decent-hearted drug-store cashier who becomes his wife. Their imperfect first date is kind of adorable, as is the no-nonsense way they stick by each other through various ups and downs.

Potts suffers a number of failures and embarrassments throughout the years leading up to his big breakthrough, including a less-than-stellar performance before his idol, Luciano Pavarotti. “One Chance” (which is also the name of Potts’ debut album) is actually more about the ups and downs he endured prior to the 2007 “Britain’s Got Talent” audition, with the tryout itself serving as an inevitable endnote – just something he signed up for on a lark because he and Julz were in need of money. (While Corden is a singer himself, Potts' vocals are dubbed throughout convincingly.)

About that tryout: Frankel stages a detailed recreation of it, down to the interview clips with Potts that aired beforehand, and intercuts them with real-life footage of the judges and audience members reacting with applause and awe. Whether you’ve never seen it before or you’ve seen it a million times, the goose bumps are undeniable. You may as well just give in. 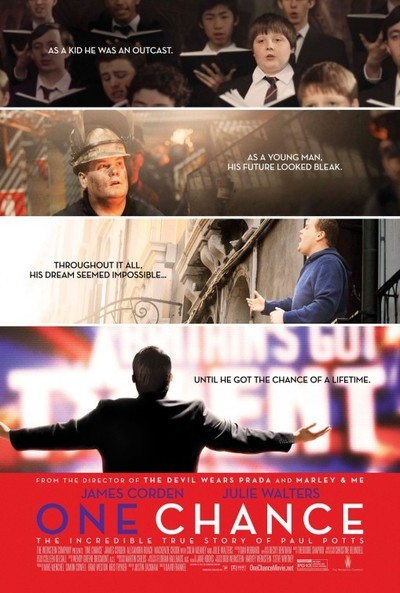 Rated PG-13 for some language and sexual material