Once Upon a Time in Mumbai Dobaara!

The difference between an entertaining pastiche and a compendium of done-to-death cliches is a matter of execution on the part of writers and directors. This difference can be obfuscated by a charismatic star, and for much of "Once Upon a Time In Mumbai Dobaara!" Akshay Kumar does just this, making a character who speaks, acts, and exists only in the most hilariously overblown tough-guy fashion seem like a self-aware creation on the part of writer Rajat Arora and director Milan Luthria. But by about the film's final third, it becomes all too apparent that this is not the case.

In this follow-up to the writer-director team's 2010 (sort of) true-crime saga "Once Upon a Time In Mumbai," the story picks up with ruthless gangster Shohaib (Akshay Kumar, taking the role Emraan Hashmi played in the original), having betrayed and assassinated the beloved don Sultan Mirza and established a worldwide smuggling empire at the end of the previous film, asserting his control over the Mumbai criminal underworld by declaring himself the one and only don. The other gangsters who, in Mirza's regime, had shared equally rankle at this power grab. Thus, things are tense. As if that wasn't enough, Shohaib and his young protege Aslam (Imran Khan) both fall in love with the same woman, aspiring actress Jasmine (Sonakshi Sinha).

It's a premise rich with potential, if the filmmakers were able to make up their minds which movie(s) they wanted to make among all the possibilities at their disposal: there's the "root for the bad guy" movie with Shohaib—based to various degrees of looseness on notorious real-life underworld boss Dawood Ibrahim—as the antihero, or the straight-up gangster movie with Shohaib as the evil villain, or the romantic farce of having don and henchman both in love with the same woman, or the romantic tragedy of same. The problem is that "Once Upon a Time In Mumbai Dobaara!" is each of those things at various times, and thus, in the end, none of them.

The great paradox of this film is that Akshay Kumar committing to Shohaib so completely in every moment adds to the problems created by the unfocused writing. It doesn't help that Imran Khan's Aslam seems like far too nice a kid to be a gangster, or even to have ever committed a crime; Imran Khan's attempts to prove that he's able to do more than light romance is really just serving as a reminder of how much better he is at light romance than the other things he's been trying. Kumar blows him off the screen in this movie, which is a problem considering that Khan's supposed to be the good guy.

Once the movie becomes a slackly-paced love triangle, it suffers from how badly the character of Jasmine is written. The film gives Sonakshi Sinha little to do. Jasmine is reduced to a literal object by the film's climax, a prize for Shohaib and Aslam to win. It's not as though rich roles with layers for women are abundant in any world cinema, but Jasmine is a particularly egregious case, little more than naivete played for cuteness, with Sinha unable to do more than stand there and smile or cry. Sinha deserves better and is capable of more.

Besides Kumar's mesmerizing star turn, which is better than the movie, the songs are good and catchy, the choreography pleasing to the eye. "Once Upon a Time In Mumbai Dobaara!" is an acceptably fluffy genre piece until the last half hour or so, when its lack of focus unravels the whole enterprise. It isn't truly worthy of ire until the final scene, which is so appallingly disingenuous in light of what's led up to it (not to mention the real-world origins, however remote by this point in the saga, of the character of Shohaib) as to spoil the rest of the experience.

It says something about Akshay Kumar as an actor and movie star, though, that even in that appallingly written moment—so dissonant from the rest of the movie, and every one of his character's actions in this and the previous film—that he still manages to sell the emotion in it. But his excellence in "Once Upon a Time In Mumbai Dobaara" is isn't necessarily an asset for the film, as it lays bare how thin and scattered it is. 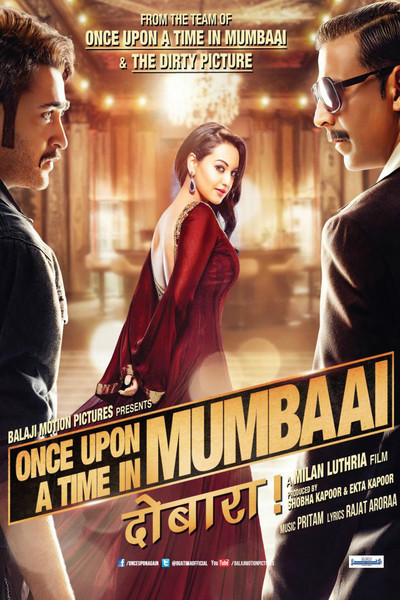