On Any Sunday, The Next Chapter

You might have heard of the 1971 doc “On Any Sunday,” produced by avid motorcycle guy Steve McQueen and directed by Bruce Brown, who’d made his name prior to it with groundbreaking movies about surfing, particularly 1964’s “The Endless Summer.” But did you know that “Sunday” was kind of the start of a franchise? “On Any Sunday 2” followed in 1981. In 2000, Bruce Brown’s son Dana, who has also made his own surfing movie, 2003’s “Step Into Liquid” (Dana’s also behind some “Summer” sequels, but let’s not get too confusing), made “On Any Sunday Revisited,” followed by a making-of on the first picture, “On Any Sunday: Motocross, Malcolm and More,” and now Dana presents “The Next Chapter.”

My recollection of the first “On Any Sunday” movie is less of the movie itself than of an impression of the audience that embraced it: workaday American men who looked at biking as a form of unalienated leisure, an exhilarating escape. A measure of how the world has changed is given the viewer in this movie’s opening presentation logos: a welder works on a bike in a sparkling garage, while a little girl cavorts about; the logo “Red Bull Media House” manifests itself in 3D, followed by the logo of Freeride Entertainment; we’re then informed, in this garage, that what follows is “Supported By Skullcandy.” (Later in the movie, a motorcyclist executes a stunt from a Park City, Utah, ski jump, and vaults over another Skullcandy logo.) The machines of escape are now lifestyle appurtenances.

What follows is all handsomely shot and not without some general interest—but the movie’s only really going to play for you if motorcycles and those who ride them are subjects to which you’re somewhat sympathetic. Dana Brown himself supplies the narration, and it’s a welter of sub-MTV style advertisements for itself; this is a story, Brown announces, “that defies stereotypes,” which usually means that it rearranges a particular set of stereotypes to make it seem as if it’s defying stereotypes. I mean, don’t get me wrong, the stuff about the deaf female motorcyclist Ashley Fiolek is interesting and somewhat touching, but to this viewer it would have been even more so had I not been assured about how surprised I was going to be right at the outset. The classic rock soundtrack choices don’t exactly “defy” anything themselves, either.

Forgive me: what I really wanted this film to explain are the (excuse my French) a-holes you find in some urban areas who think it’s acceptable to rev their machines at ear-splitting volume at stop lights for no good reason. What’s their story? Do they have any kind of rationale that makes any kind of sense aside from the conclusion I’ve already made about such characters? Brown declines to venture into this area. In other respects, however, he delivers a clean and concise report on The Wide World Of Motorcycling in the 21st Century, and also delivers some memorable imagery, particularly at the Bonneville Salt Flats and in Southeast Asia. 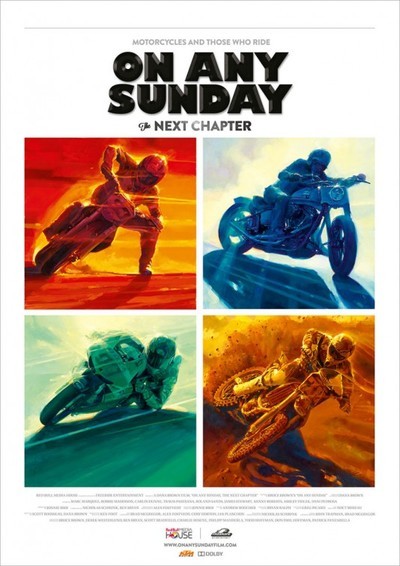 Rated PG for perilous action, some crashes and brief language