If your first thought of Olympia Dukakis is her Oscar-winning role in "Moonstruck," this documentary about her life and career will probably convince you that it is her third-best performance. Second is Dukakis as herself: delightfully earthy, candid, replete, wry, constantly drawing energy from the world around her and from creative engagement with it. But it is impossible to watch the film without concluding that the fullest expression of her life as an artist is in her theater work. Fellow actors who watched her from the audience decades earlier tear up recalling her fearless, ferocious performances, especially those in the Whole Theater Company, which she co-founded in New Jersey in 1973. Images from those plays hint at the vibrant intensity Dukakis brought to roles like Mother Courage, Serafina in The Rose Tattoo, or Prospera (a gender-switched Prospero) in The Tempest.

As director Harry Mavromichalis nudges her to look back, her years of the Whole Theater Company are the most meaningful because of the roles she was able to play, and the people she was working with. After a childhood of ferocious rebellion against her strict, repressive, Greek immigrant mother, who made her feel that women were not important, Dukakis first embraced acting because she was good at it and being good at something made her feel better about herself. And then she discovered that being good at acting had another advantage. It brought her better roles, though she was still often dismissed as "too ethnic" on the basis of her name alone, and she became very competitive. (As we see, she was never less than "very" anything.) But there came a moment when she was about to go onstage, her hand reaching for a doorknob, when she realized she did not want to do it anymore. That is when she understood that what she had been missing was working with the other actors instead of trying to compete with them. The connection to other actors, and the chance to play the roles that called to her, inspired the creation of the theater company.

"Olympia" has the usual biographical documentary structure, though it's a bit of a hodge-podge, following Dukakis to a festival, a rehearsal, awards events, at home, intercut with archival footage and comments from friends, colleagues, and family. We see her as marshal in a Pride parade, honored for playing a trans woman in a Tales of the City miniseries in 1993, then returning for a sequel in 2019, though we may wonder if even so talented a cis-gender actor should play that role. But it is a pleasure to spend time with Dukakis, who is always not just open to but hungry for revelation, growth, and connection, giving the documentary a deliciously buoyant quality.

Dukakis is honest because she does not know another way to be. She tells us about her struggles with substance abuse, about how much she relished her years of what she calls "one-night stands" and misses the ability to take male virility for granted (she puts it another way). She says it was not until she met her husband, the actor Louis Zorich, that she learned to bring tenderness and emotion to sex. And she tells us her reaction when she was pregnant with their first child and found out Zorich was having an affair with another actress. It was characteristically firm: "If you don't come home you won't have a home to come to." And then she laughs and tells us she met the actress later and liked her, adding with flair and just a touch of wicked relish, "She thought we were odd."

Dukakis acknowledges that she made mistakes as a mother, perhaps over-correcting for her own mother's strictness by failing to give her three children adequate boundaries. One of her sons tells a funny story about his birthday, more amused than resentful. Dukakis does not go into detail about her regrets about her daughter, the only one of her children who does not speak in the film, but we glimpse her briefly in the background with her own daughter on a three-generation family trip to Mycenae, Greece. Dukakis chats in Greek with the black-clad ladies who live there, and imagines she would have been one of them if her mother never left.

"Dukakis" captures other memorable moments: she gets impatient with Siri; she is deeply moved by her research into the goddesses of the ancient world. When a make-up artist preparing her for a red carpet event doesn't have some high-end item, she and Zorich laugh and wonder if there might be another star staying at the hotel who can provide it. They take much too much pleasure in the absurdity to be bothered by an incomplete maquillage. She rehearses King Lear (playing the title role), directed by a former student, fully engaged, and shakes a pill bottle for the sound of the storm, always searching for deeper meanings in the script. In Greece, Dukakis watches a large turtle returning to the sea, yet another mirror for her to consider lessons about who she is, so that in her 80s she can keep doing better at showing us who characters are. 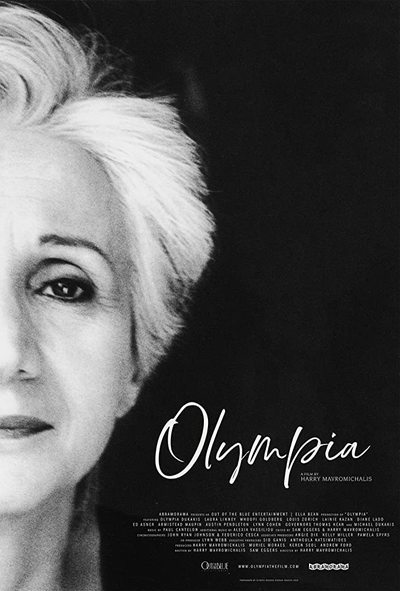 Olympia Dukakis as Herself

Laura Linney as Herself

Whoopi Goldberg as Herself

Diane Ladd as Herself

Ed Asner as Himself

Armistead Maupin as Himself

Lainie Kazan as Herself

Louis Zorich as Himself

Austin Pendleton as Himself

Lynn Cohen as Herself