This movie begins on an emphatically macabre note: a poor soul steps in front of a speeding train in Tokyo’s busy and fraught public transport system. Afterwards, a group of witnesses convenes to no end in a room; one of them is a middle-aged woman wearing a dust mask as so many Tokyo residents do. This is Setsuko (Shinobu Terajima), a lonely married woman working a dead-end job full time. On an evening after work, she meets her perky young niece Mika, who persuades Setsoku to take an English course that she, Mika, is trying to get out of. A matter of 600,000 yen is at stake here, although it’s never entirely clear exactly how.

The course itself is run out of one of those multi-leveled Tokyo building packed with karaoke bars and other nightlife attractions. The shy, plainly-dressed Setsuko is highly taken aback when walking into a very non-classroom-type joint, seeing a sign that instructs her to speak English only, and meeting John, her instructor. John, played by Josh Hartnett, is buff and cheerful. And like a lot of English instructors in Japan, he doesn’t know much Japanese. He immediately places Western-style wigs on his students and gives them English names. A man in the seemingly two-person class becomes “Tom”; Setsuko becomes “Lucy.” Setsuko is both put off and diverted by John. One can’t blame her for the latter. Setsuko’s life outside this colorful class is dreary, and Setsuko herself doesn’t help. At a party for a departing co-worker, Setsuko gets drunk and tells the woman that the coworkers now pretending to fete her universally despise her. She later sees the woman on a train platform with her going away balloons. Will she throw herself in front of a train? Is Setsuko wondering this, or are we?

Director and co-writer (with Boris Yutsin) Atsuko Hirayanagi has a knack for staging scenes in a way that makes them intriguingly uncomfortable, but that doesn’t succeed in elevating “Oh Lucy!” from some of its more commonplace features. One evening, Setsuko is abruptly informed that John has stopped teaching the course, and Setsuko spies him and Mika together. She tells on Mika to Ayako, her sister and Mika’s mother, and the two impulsively fly to Los Angeles to confront Mika. Well, at least Ayako wants to confront Mika. Setsuko has ideas of her own, including designs on John. On arrival in America, they find John on the verge of eviction from his apartment, and Mika on the lam. Complications are explained—what do you know, in his own inept and wheedling way, John is a bit of a con man. But for all that, Setsuko is not put off. And one evening, under the pretext of getting John to teach her to drive, she makes her move.

This has repercussions for all involved. As seemingly conscientious a character study as this movie is, there’s also something about its low-key fish-out-of-water mode that didn’t sit well with me. This is the second movie I’ve seen this decade in which a lonely and possibly delusional Japanese woman takes a trip to America in search of some form of fulfillment (the other is 2014’s “Kumiko, The Treasure Hunter”) and while that’s not a whole lot, there’s a familiarity to the cinematic Japanese spinster in general that I’m tired of. (Specifically, I think the character conception at the very least skirts exploiting a sexist stereotype.) “Oh Lucy!” has moments funny, tender, and disturbing, to be sure, but the treatment of its central character veers so wildly between the sympathetic and just plain pathetic that there’s a blur where the movie’s heart ought to be.

Note: This review was edited on March 11th. Nothing was deleted or altered but a parenthetical was added for clarity. 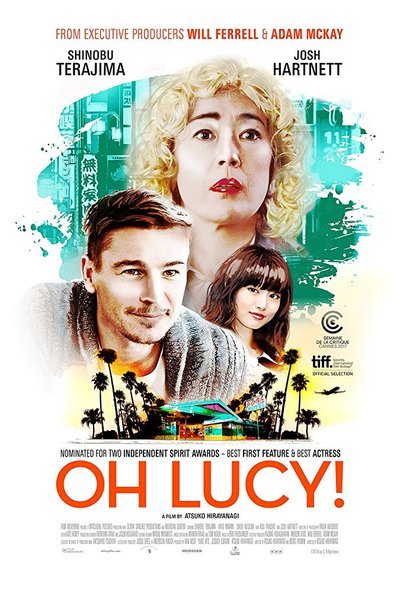 Writer (based on the short film by)