It’s easy to understand why the true story that inspired the makers of “Official Secrets” might look like a good idea for a movie. Katherine Gun, the British whistleblower who uncovered U.S. efforts to dirty-trick the U.N. into approving the Iraq War, is an appealing figure whose findings should have been scandalous enough to unseat maybe two governments. They did not, the Iraq War was launched anyway, four years in 150,000 to a million were dead, including thousands of U.S. and British soldiers. Gun was a translator who received a memo she eventually shared with the British press—an apparatus that, like the U.S. press, took a notably non-skeptical view of the “weapons of mass destruction” line both U.S. and British power players fed the world in its quest to unseat Saddam Hussein.

Gun was put on trial in 2004 for violation of a British “official secrets” law. Anyone with a library card or Internet access can find out how things turned out for her, sure—but everyone knew how “All The President’s Men” was gonna turn out, and William Goldman and Alan J. Pakula and Gordon Willis and so on still managed to make that story into a crackerjack thriller and political parable.

But where that movie had a lot of indignant voltage running through it, “Official Secrets,” directed by Gavin Hood from a script by Hood, Gregory Bernstein and Sarah Bernstein (based on a book by Marcia Mitchell and Thomas Mitchell) feels both dutiful and dry. It begins with Gun, played by a deglamorized Keira Knightley, in the docket for her 2004 trial and flashed back to the fateful day at her job in a government translating service when that odd memo arrived in her email box.

Gun is already in a tizzy over the run up to war. Watching the news one evening, she yells at Tony Blair on her television: “Just because you’re Prime Minister doesn’t mean you get to make up your own facts!” Her husband, who’s a Turk and a refugee, tells her, as she already knows, “he can’t hear you.”

The memo ordering surveillance on U.N. Security Council member countries reluctant to play ball with the Bush and Blair Show give her a way to be heard. But it’s dynamite stuff. Not even her most committed activist pal wants to handle it. Along the way there’s a scene of a secret meeting in a parking garage that’s more realistic, maybe, than the shadowy one in “All The President’s Men,” but not nearly as gripping. This problem persists throughout.

While Gun tries to unload her info, in the offices of the British paper The Observer, one veteran firebrand reporter, Rhys Ifans’ Ed Vullaimy, is giving his bosses hell for being led by the nose by the ongoing spectacle. The memo Gun finally gets to Matthew Goode’s newsman Peter Beaumont underscores the essential falsity of the whole war enterprise. But the question of stopping the war becomes moot. The question of how Gun will be revealed and what will happen to her, and her husband, takes its place. The subsequent action, such as it is, reveals tensions at the very top of the ladder of Britain’s ostensibly gentlemanly, class-based power structure. Ralph Fiennes plays a lawyer representing Gun, while Jeremy Northam is his politician friend who very stuffily prevaricates about how much he tried to prevent military action from going forward in Iraq.

The denouement of the relationship between these two characters puts a little sting in the tail of “Official Secrets,” but by this point it’s a bit like watching a patch of paint crack after you’ve spent a while witnessing it drying. 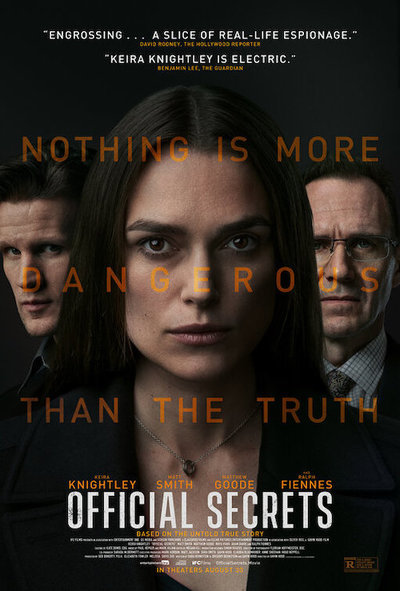 Writer (based on the book: "The Spy Who Tried to Stop a War: Katharine Gun and the Secret Plot to Sanction the Iraq Invasion")