There's a stunning shot more than halfway through Lars von Trier's "Nymphomaniac: Vol. II", when Joe (Charlotte Gainsbourg), wandering through the wilderness, comes across a twisted tree jutting out of a rock. The tree has no shelter from gale-force winds, causing it to turn almost completely sideways, the roots still buried in the earth. Joe stands on a nearby rock, framed by the almost-horizontal tree in the foreground, and the camera pans around to the side to give us the magnificent long view. It is a grandiose shot, thematically driven and emotional in nature, operatic in scope. e.e. cummings wrote "since feeling is first / who pays any attention / to the syntax of things." Both volumes of "Nymphomaniac" pay attention to both, the "feeling" and the underlying "syntax of things", making the films a story of erotic misadventure as well as a meandering first draft of a many-footnoted thesis paper.

Vol. I felt much wider in scope, crazier, satirical, goofy even. Vol. II narrows the lens, and has more of a desire to explain, to diagnose, to wrap things up. Gainsbourg's performance of Joe doesn't help; her monotone line delivery and flat affect is clearly a performance choice, but it's a bit tough-going to sit with for two hours. The flashback structure of Vol. I highlighted the artificial framing device and created an entertaining distancing effect. That distance is no longer present in Vol. II, when Gainsbourg plays herself in the flashbacks, and everything gets a bit too literal.

Joe is still lying in bed, telling her life story to Seligman (Stellan Skarsgard) who has taken her in after finding her beaten in an alley. She shares a momentous moment from her life when she was 12, when she lay on her back in a field, and experienced a spontaneous orgasm, all while being watched over by two hovering female figures. Joe has gone through life assuming that the women she saw were variations on the Virgin Mary, perhaps standing in judgment of her sexual awakening, but Seligman is delighted to inform her that, because of the symbolic objects the figures carried, they were actually the Whore of Babylon and Valeria Messalina, wife to Roman Emperor Claudius, and known as a rampant floozy. Seligman launches into an explanation of the giant schism in the Christian religion, an important motif of the film: the Orthodox (Eastern) church focused more on the redemption and the transfiguration, while the Western church zoomed in on the suffering of the crucifixion. Joe incorporates Seligman's iconography into the rest of her story. In her life, she went towards the suffering.

When Vol. II opens, Joe is now married to the drippy Jerome (Shia LaBeouf), and they have a baby son. Unfortunately, she has also lost all interest in sex, and has no more sexual sensation. He gives her permission to take other lovers in order to get her groove back.

As Stacy Winter morphs over a three-year period into Charlotte Gainsbourg (while Shia LaBeouf remains the same, making one wonder if he didn't think to himself, "Why does my wife look totally different now?"), the story takes a darker turn. No more the casual conquests on a train, or the rotating doorway of lovers, exuberant and messy and awful. Joe starts to seek out "dangerous men", like the two African brothers who don't speak a word of English, who stand over her, arguing over who gets what hole, essentially, all as she sits between their two erect penises, watching them fight it out. It is the film at its most bratty.

Joe then seeks out the mysterious K (Jamie Bell, in a fantastic performance), who services women in what looks like a deserted office building. Filmed with the utmost naturalism, down to the ugly fluorescent lighting, the K sections are the best of Vol. II, tense, disturbing, even erotic (the K scenes stand out, since the rest of the sex in the film looks altogether dreary). Women sit quietly in a makeshift holding area, not talking to one another, waiting to be summoned. K sets out the rules to Joe bluntly: He will not have sex with her, and there will be no "safe words" while he is in charge. He is both soft-spoken and violent, giving the women the beatings they want, but there are strange solicitous moments, careful and gentle, like when he takes Joe's coat, or when Joe starts to hyperventilate at one point and he whispers, "Breathe. Take it easy." It's a fascinating little character study, and Jamie Bell casts a long shadow through the film.

Joe becomes so addicted to the dynamic with K that she leaves her baby son sleeping in the crib at home, unattended, so that she won't miss an appointment. It is the first moment, in the entirety of her adventures, where you start to understand why she keeps telling Seligman that she is a bad person. The K experience launches Joe into the final chapter, which will explain why she was found beaten in that dark alley. This final chapter is the most conventional of either of the volumes, plot-heavy, character-heavy, and it involves Willem Dafoe, in a very entertaining cameo, as a guy who employs Joe to sexually harass those who owe him money. Joe takes on a protege, a misfit teenage girl, and things get messy. What a shock.

Seligman still stops her story repeatedly to bring up this or that connection and after he shares one anecdote, Joe thinks it over and comments, “I think this was one of your weakest digressions.” And it was! These moments of distancing, so common in Vol. I, are few and far between here, and they bring welcome moments of levity and self-awareness. Finally, Seligman reveals that he is a virgin, and: "I consider myself asexual". So there is a reason for his detachment from the erotic content of her stories, there is a reason he is not turned on by them and hasn't made a pass. At one point, Seligman is shown from above, body splayed out, falling slowly backwards onto a floor covered in books. Both characters are seeking escape from the banal, and her swoon upwards as a child into sexual sensation is connected with his swoon downwards into the life of the mind.

Joe attends some Sex Addicts Anonymous meetings, and immediately causes friction with the group because she says she is not a "sex addict," she is a "nymphomaniac". Her independence is paramount. The self-help world is not so much lampooned (although there is some of that going on) as shown to be completely unequipped to deal with the real chaos at the heart of the sex drive. Joe is told by the leader of the group to get rid of anything in her apartment that reminds her of sex. We then see her boxing up and wrapping up literally every object in sight, until the room is empty of everything but a bed. The scene is played for laughs, and it is funny, but underneath it you can feel the urgency of the question, something humanity has wrestled with from the beginning: How is this to be controlled, exactly? It's like trying to put a leash on a typhoon.

Independence or no, Joe has ended up destroyed. She has had so much sex that her vagina is now basically a wound, and she can't bear to have it touched or looked at. She puts her hand over it to hide it, crying. The Latin root for "pudenda", depending on what source you use, is "thing to be ashamed of", or "to be ashamed". A woman realizes how the culture feels about her different sexual body parts by going back to their linguistic roots. "Pudenda" is not the only example, although it's the most revealing. Shame goes so deep that it's in the word we use. Joe has lived her life trying to get far away from the domestication of sex. It has ruined her body and ruined her relationships. She says flatly, "Society had no room for me." And indeed it didn't.

I wonder how people will feel about the final moment of the film. I thought it was great, albeit extremely cynical. Joe had said earlier that she was afraid that Seligman might have "misunderstood" one part of her story, despite his latching-on to different aspects of it in order to discuss Beethoven, "Dr. Faustus" or fly-fishing. We learn in the last moment of Vol. II that the situation is far far worse than mere misunderstanding.

Or, said another way, we learn that "misunderstanding" is at the root of all of our problems in life. "Nymphomaniac", both volumes, as uneven as they are, especially when taken together, is not so much a plea for understanding, as it is a brutal diagnosis. 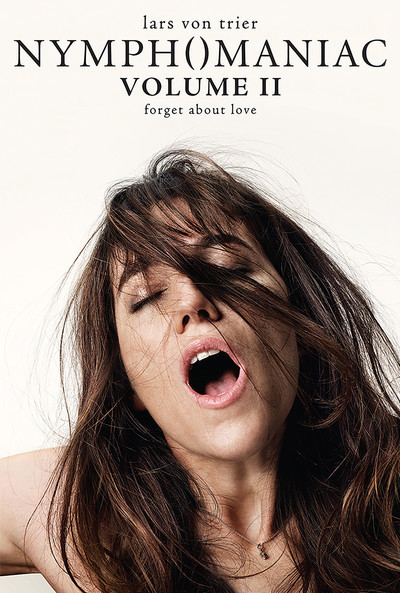