The easiest mistake to make about the Middle East is thinking you understand it. The region is more diverse and more nuanced than any layman could imagine. There are centuries of history, and cultural practices that vary by religion and by country, and contrasting priorities that lie along the faults between ethnic groups. Focusing only on the modern traumas of the Middle East tells one part of the story, and “Notturno,” a documentary filmed over three years along the borders between Iraq, Kurdistan, Syria, and Lebanon, effectively captures the day-to-day struggles of living in a place torn apart by war. But there is so much more to know about these people that Gianfranco Rosi’s film fails to communicate because of its prioritization of beautiful visuals over narrative contextualization, and while “Notturno” shares many moments of profound fragility and deep beauty, it also paints an incomplete portrait.

To be fair, Rosi’s aim is exactly to ignore political motivations. In the press materials for “Notturno,” Rosi explains that his documentary intentionally “does not investigate the causes of conflict or the multiple religious and territorial problems at play,” and neither does the film distinguish the locations it puts onscreen. Instead, how “Notturno” jumps between countries and between communities without spelling out where they are or who they are serves two purposes. The first is to suggest the meaninglessness of borders, in particular those in the Middle East, a region carved up by colonial powers and foreign interests after the dissolution of the Ottoman Empire and the end of World War I. The second is to emphasize the shared humanity between all of us, broadly, and the resilience and will of these people living through the age of ISIS, specifically.

Those are both admittedly worthwhile aims. Much has been written about how the omnipresent tensions in the Middle East are partially caused by the recklessness, greed, and ignorance with which the Sykes–Picot Agreement was engineered, and it was Roger Ebert himself who described cinema as an empathy machine. It would be difficult to watch “Notturno” and not feel any shred of empathy toward a stuttering child who describes fleeing ISIS, or admiration toward the female militia fighters who battle fatigue and exhaustion to hold their position, or queasy unease toward a prison full of captured ISIS members, their bodies nearly stacked one on top of each other in a crowded cell. But at a certain point, “Notturno” begins to repeat its broad “war is bad” ideology without any additional perceptiveness, and the documentary begins to feel more like exploitation than compassion.

“Notturno” follows certain individuals and certain groups who are never identified by name, some of whom are only shown in one scene and others who are returned to over and over again. This is extremely observational filmmaking, with Rosi setting his camera down and letting action play out in front of it with little to no interference, and he has collected moments that span the gamut of human emotion. In the blue dawn, groups of soldiers jog by, their chants fading away until another squadron follows behind, announcing their loyalty to the same cause. Immediately after that militaristic introduction, Rosi cuts to a crumbling prison in which a group of older women clad in burkas and headscarves wander the halls, cluster together in cells, and pray and weep over their sons who were seemingly held here before they died. It is an intimate, awful moment, and one of a few throughout “Notturno” that feels like a moment of trespass rather than one of understanding.

That unsettling contrast between those who commit violence and those who lives are torn apart because of it is one Rosi plumbs often by following individuals on both sides of the conflict. The female Peshmerga fighters—women fighting ISIS in the autonomous Kurdish region of Iraq—are shown, their days divided between gun duty and patrol shifts, or book reading and cellphone-video watching in their barracks. One of the documentary’s most searing images is of the women getting up together in the morning, strapping on their body armor in shared silence, and then warming their hands over a samovar and tea kettle in the middle of their sleeping area. Later on, when a classroom of children who escaped from ISIS draw pictures of the horrors they’ve seen—chopped limbs and beheadings rendered in crayon and colored pencil—you wonder what those Peshmerga fighters have internalized and absorbed, too.

And even when “Notturno” deviates from explicitly showing violence, it’s never entirely out of mind. American military vehicles are shown, flags flapping behind them; have the stars and stripes ever signified something good in this part of the world? A teen works every day to support his mother and younger siblings; his solitary silhouette on the side of the road, waiting for anyone to pick him up for an odd job, makes plain the childhood he lost. A married couple enjoys a rooftop hookah and prays for rain while gunfire sputters in the distance. A trapper eases into his hidden kayak to search for game amid the rushes and the reeds; burning oil refineries far away suggest conflict.

But the vagueness of that terminology—“conflict”—is exactly the problem with “Notturno.” The film’s introductory intertitle blames “tyranny, invasions, and terrorism” for hurting the Middle East’s citizens, and Rosi’s stated intention is to show how normal people carry on despite such hardship. Does the movie fall into othering, though, by nearly exclusively showing people in moments of profound pain and debilitating heartache? Is that humanizing, or is it flattening the trauma of others by transforming it into a tidy lesson for us in broadening our perspectives? “Notturno” is so interested in aesthetic beauty—the burning red of a setting sun, the crisp white thawb donned by a street singer, the painterly depiction of a boy in a windbreaker, his serene face framed by its hood—that it sometimes links dignity with tragedy, as if these people are made more lovely because of their suffering. That’s a kind of Orientalism, too, and “Notturno” is a better film before it falls into that ideological trap.

Now available on Hulu and VOD. 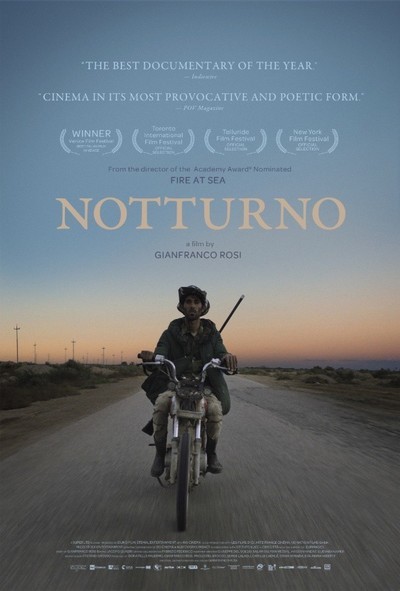