Nomad: In the Footsteps of Bruce Chatwin

According to IMDb, Werner Herzog has 71 directorial credits to his name with an additional three films currently in the pipeline. I would say that of those projects, I have seen roughly two-thirds of them—certainly all of his major works and pretty much everything that has made it to these shores over the past couple of decades. Some of them have been great, a couple of them have been on the shaky side and there are even a couple that have fundamentally altered my thoughts on what can be accomplished through the power of cinema. In every single case—even the ones that I am not entirely sure about—I have never once watched one and felt that he was simply going through the motions in order to fill a hole in his schedule or score a quick paycheck. One always has the feel that they are in the hands of a filmmaker who is telling a story for which they feel a great degree of affinity and is determined to convey that passion to viewers.

I say all of this not because I think that a recitation of Herzog’s bona fides is needed, but as a way of signaling to you that when I say that his latest documentary, “Nomad: In the Footsteps of Bruce Chatwin,” is one of the most deeply personal films of his long and brilliant career, I am not just indulging in a bit of critical hyperbole. Even though the film is ostensibly a tribute to a late friend, it almost off-handedly gives us a greater idea of what it is that makes someone like Herzog tick and drives him to the lengths that he has gone time and again throughout his career. Even if he one day set out to make an overt cinematic self-portrait of his life and work, it is hard to believe that it could be as penetrating and insightful as this film.

Chatwin was a British travel writer, journalist, and novelist who had a particular fascination with the theme of human restlessness. He believed that mankind was hardwired to be a migratory species and all of the troubles began when it abandoned that notion in order to begin settling down. He traveled the world, at a time when it was still possible to go to places that hadn’t been overrun with tourists, and wrote vividly about in such acclaimed books as In Patagonia (1977) and The Songlines (1987). It was during his time in the Australian Outback writing the latter title that he first met Herzog in 1983 and realized that they were kindred spirits whose journeys had taken them to a number of the same places, albeit at different times. This began a friendship that would last until Chatwin’s death in 1989 and included Herzog adapting Chawin’s The Viceroy of Ouidah into the hallucinatory 1987 adventure “Cobra Verde.” As a tribute to his friend, "Nomad" finds Herzog journeying to a number of the places that he and Chatwin encountered in the past in order to look at them anew and reflect on how the nomadic spirit that drove Chatwin and continues to drive him has largely become a thing of the past.

In the spirit of adventure that this film represents, I will leave most of what he comes across for you to discover on your own. The one chapter that I will mention is its first, which takes us to Patagonia, where, the story goes, a past relative supposedly discovered a perfectly preserved brontosaurus. Alas, the creature was destroyed on the journey back to civilization but a piece of skin covered in fur was saved and made its way to his grandmother. Herzog finds that mysterious piece of skin in a museum in Buenos Aires and while it may not come strictly as advertised, its history is still pretty fascinating, as is the somewhat more scatological piece that it is being exhibited in the same case. The whole thing may come across as absurd but Herzog does not treat it as a joke. By the end of the sequence, you may be stunned by how he and Chatwin were able to take things as mundane as a piece of skin and a giant piece of shit and transform them into talismans to help viewers contemplate the infinite possibilities of existence.

Because it lacks the kind of big hook that attracted attention to Herzog’s more well-known documentaries, there is the distinct possibility that “Nomad” may be viewed in some circles as a minor effort that's little more than him paying back a metaphorical debt to one of his inspirations. This could not be further from the truth because it has everything that one looks for in a Herzog film—scope, ambition, moments of extraordinary visual beauty (it is too bad that few people will be able to see this on the big screen where it belongs), bits of mordant humor, and enough intriguing philosophical concerns to inspire and drive any number of post-screening conversations. In time, I suspect that it will be regarded as one of the great and meaningful works in a filmography that is not exactly lacking for such things. That said, why wait until everyone else has settled on that when you can go out right now and discover its mysteries and majesties for yourself? It would certainly be keeping in the spirit of “Nomad” and you will be seeing one of the year’s best films to boot. 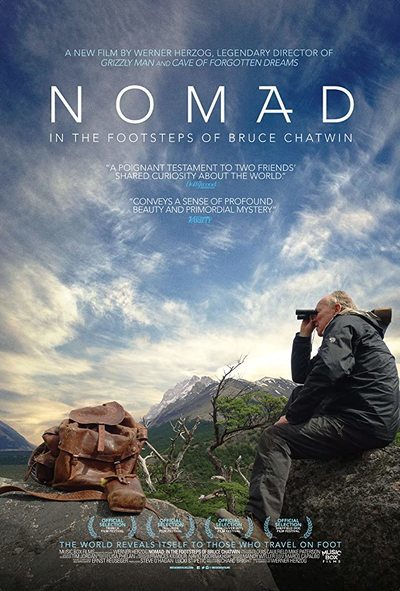 Nomad: In the Footsteps of Bruce Chatwin (2020)

Bruce Chatwin as Himself (archive footage)