The lo-fi horror film "Night's End" tries to combine old-fashioned haunted house chills with more contemporary technological terrors, but never quite figures out how to do that. It has a couple of good and potentially intriguing ideas at its center, and it keeps you sort of interested in its goings-on for most of its running time. But it isn't particularly unique or suspenseful, and its abrupt conclusion will most likely inspire more shrugs than shivers from viewers.

The film is set entirely within the apartment belonging to Ken (Geno Walker), a man who a couple of years earlier had a problem with alcohol that caused him to suffer a nervous breakdown, costing him his job and family. He has now relocated to an unknown city to live in an apartment in an old building where he is the only tenant. Although he claims over Zoom calls to his ex, Kelsey (Kate Arrington) and old friend Terry (Felonious Monk) that he is doing fine, we can plainly see this is not the case—the windows in his place are all covered with newspapers, his diet seems to consist entirely of tomato soup, coffee, and Pepto-Bismol (the latter two of which he mixes together each morning) and he refuses to leave his apartment to look for a job or to do anything else. He has the idea that the YouTube videos he posts on a variety of topics will bring in enough money for him but considering that he doesn’t seem particularly interested in any of his subjects, that seems highly unlikely.

One day, Terry notices that in one of Ken’s videos, a bird that was one of his subjects as an amateur taxidermist fell from the shelf it was resting on in the background for no apparent reason, and jokes that perhaps it was knocked over by a ghost. Ken shrugs this off at first but when weird things begin happening—bloody noses, strange noises and the like—and he learns that the building was the sight of a grisly crime a century earlier. Ken becomes increasingly convinced that his place is indeed haunted. Spurred on by this discovery, the encouragement of Terry, Kelsey, and Kelsey’s new husband (Michael Shannon) and, perhaps most importantly, the uptick in online hits to his ghost-related videos, Ken gets into contact with a pair of authorities on the subject—an occultist (Lawrence Grimm) with additional information on what happened in the building long ago, and a more successful YouTube paranormal investigator (Daniel Kyri)—and they decide to perform an online exorcism ritual that will be live-streamed for all to watch. As you can probably surmise, it does not go particularly well.

“Night’s End” was directed by Jennifer Reeder, whose previous film was “Knives and Skin,” a surreal mystery-thriller in which a teenage girl's disappearance inspired equal amounts of intrigue and ennui among the other residents of her rural Midwestern town. I didn’t think that was a particularly good movie—it leaned a little too heavily on David Lynch-style weirdness for my taste at times—but Reeder handled it with enough skill and style to make one interested in what she might accomplish with the benefit of a stronger script. My guess is that most viewers of "Night's End" will feel something similar. Most of its problems can be traced back to Brett Neveu’s screenplay, which starts off as an interesting exploration of its troubled central character but then gets increasingly hokey and derivative once the paranormal stuff takes center stage. "Night's End" becomes an orgy of silly “Boo!” moments, culminating in an online-based finale that's not quite as fear-inducing as the typical meeting held online.

The performances are all over the map. On the one hand, Walker does a good job of establishing Ken as a character who, despite his insistence that he's just fine, seems to already be just a step or two away from another complete collapse even before the ghostly stuff begins. On the other hand, Grimm plays his supernatural expert so broadly he makes the Reverend Kane character that the late Julian Beck played in “Poltergeist II: The Other Side” seem restrained and cuddly by comparison. The rest of the performers in the small cast have little to do than appear on Zoom calls and dole out heaps of backstory, though Shannon at least seems to be having fun during his brief appearances.

You and I have both seen far worse supernatural thrillers than “Night’s End” but we have also seen much better ones as well. Even at a relatively brief 81 minutes, it meanders a lot and might have been more effective if it had been tightened up and reconceived as an episode of an anthology film or television series. That said, Reeder still shows herself to be a filmmaker of promise, if not yet a particularly good judge of material. 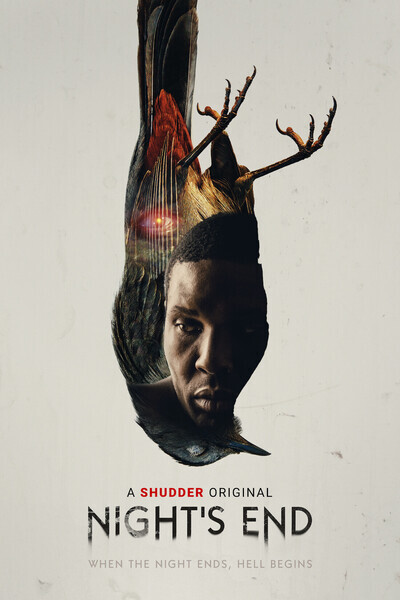